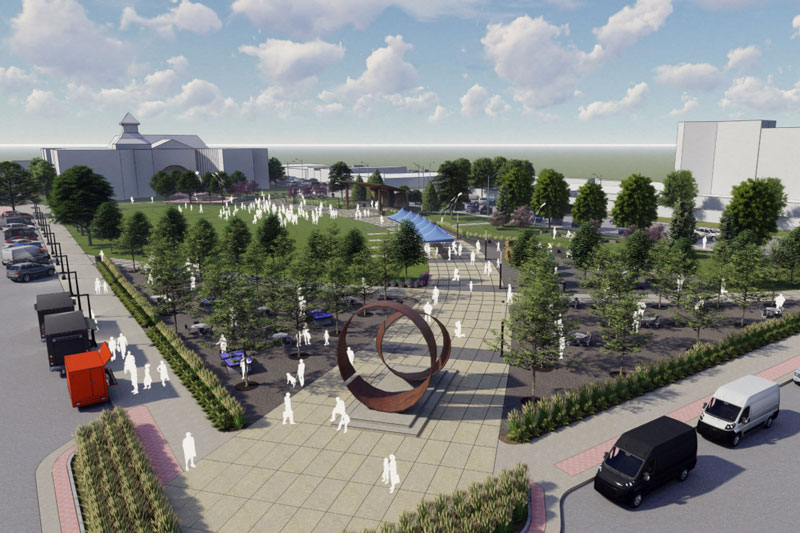 The main entrance to the county square park would be at Santa Fe Street and Cherry Street, which is where the large artwork might be placed. Above, a rendering of an aerial view from Santa Fe and Cherry Streets. Rendering courtesy Landworks Studio.

A green space concept is taking shape for the soon-to-be-vacant plot of land in downtown Olathe where the current Johnson County courthouse stands.

County commissioners earlier this month got a first look at initial designs for what could go into the space between the new courthouse, which is going in on the northeast corner of Santa Fe Street and Kansas Avenue, and the county administration building just to the south. The plan may eventually include a tree grove, a stage and shelter for events and eating, a memorial plaza with historical markers and a play area and art garden for families.

Now that the new courthouse is nearing completion, discussions are beginning in earnest about what to do with the space that will be available once the old courthouse is demolished. County commissioners got their first look recently at staff-recommended improvements that were based on input from surveys and open houses last fall.

The plan is for what will be a downtown park, with curved walkway and green space for gatherings as well as educational markers and perhaps iconic art. The family play area would not have traditional playground equipment, however, but no more specific ideas for it were presented.

The plan recommended by staff and an 11-member steering committee allows an existing water feature and some historical markers to remain in place, although the markers might eventually be moved. It also attempts to protect existing trees. But the gazebo that now occupies the center of the space would be torn down to be replaced by a multi-purpose area for events.

The main entrance to the county square park would be at Santa Fe Street and Cherry Street, which is where the large artwork might be placed. No artwork has been chosen, since the plans are in the very early, conceptual stages.

The plans called for a phased approach, with the first phase being grading and backfill on the footprint of the old courthouse, as well as protection of trees and installation of the green. It would make the space useable with minimal changes, and the gazebo would remain. The $575,000 cost is already included in the total courthouse project and could be done by mid-October of next year.

Phase two adds lighting, landscaping, the walkway and plantings for a corner tree grove, as well as removal of the gazebo. That would cost another $415,000, which staff said could be covered by contingency funds set aside for unexpected construction costs in courthouse building.

Adding the art, multi-use platform, garden play area and grouping of the historic markers adds another $1.5 million to the project, bringing total park costs to $2.49 million. However that last bit is not in the courthouse budget, which is funded by a quarter-cent add-on sales tax. Getting the park to completion would require fundraising, said county Facilities Manager Brad Reinhardt. The Johnson County Rotary Club has shown an interest, he said.

Commissioners will not make any decisions in the near future. Chairman Ed Eilert said he’d like to wait and see whether unexpected expenses arise that affect the contingency fund.

Demolition of the old courthouse is set to be completed by August, 2021.