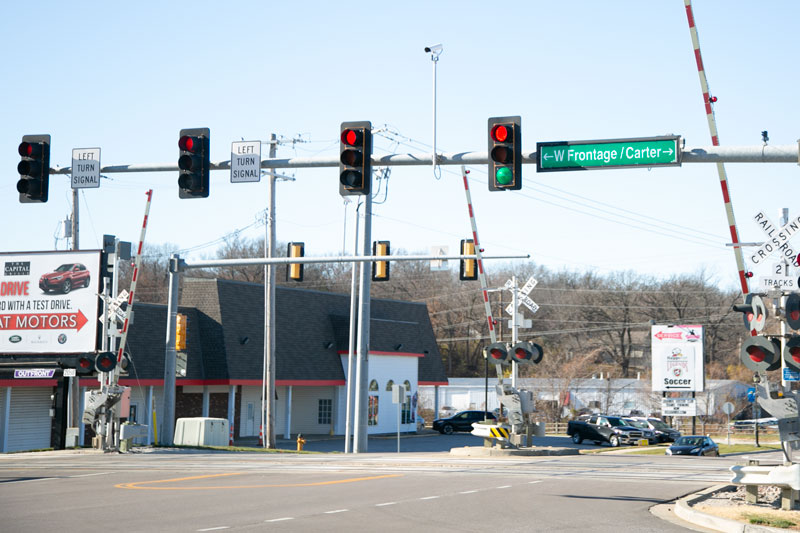 Merriam is installing license plate camera readers at two intersections, including the one above at 67th Street and Carter Street. The readers will compare license plate numbers to those on a "hot list," Police Chief Darren McLaughlin said.

The Merriam City Council last week approved the purchase of five license plate camera readers to be placed at the intersections of 75th Street and Kings Cove Drive and 67th and Carter Avenue.

Recently taken off the city council’s consent agenda for discussion by Councilmember David Neal, the approved purchase comes as an investment “in tools that help us be both proactive in preventing crime and also provide evidentiary information to solve crimes,” according to city documents. Neal raised privacy concerns and told the council about the National League of Cities’ push to shield the personal data of residents from third party vendors.

In response to Neal’s concerns, Merriam Police Chief Darren McLaughlin said the vendor, Genetec, listed in city documents will install and configure the cameras, but the software used to run the devices will be purchased by the city, which will also have a maintenance agreement for the software. The data, he said, will be kept on police department’s servers and will not be made available to anyone outside of law enforcement, he said.

“The data stays on our servers, behind our firewalls and it’s not sold and it’s not bargained, it’s not given to anybody outside of law enforcement — and it never will be,” McLaughlin said.

He explained that the police department downloads a file — with a list of license plates that are on what is called a “hot list,” including those for stolen vehicles or those related to some criminal activity. That file will then be uploaded on a routine basis to a department server, McLaughlin said.

McLauglin said the cameras will only flag cars that are on that “hot list.” While the software keeps a record of all cars, it is deleted every 180 days because it’s not intended to be a database of peoples’ movements, just a way to catch crime and process it, he said.

The city council approved the purchase in a 6 to 1 vote with Councilmember Jason Silvers voting against it. Councilmember Whitney Yadrich was absent.