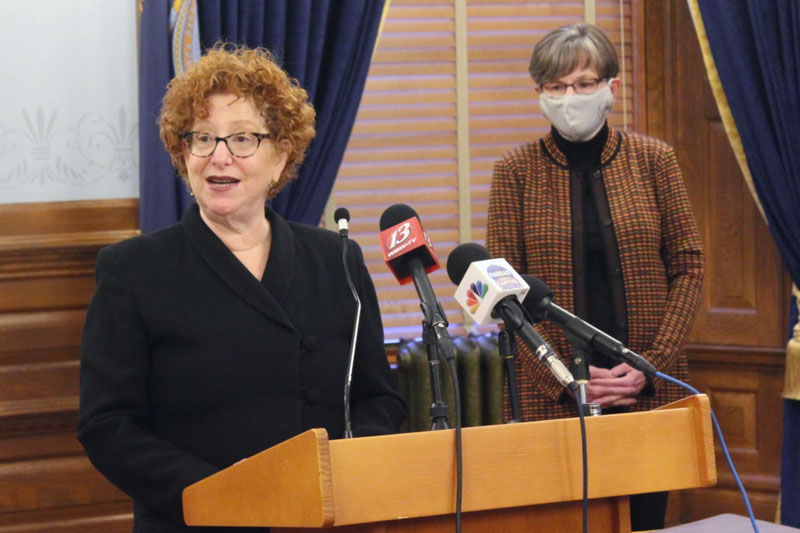 Kansas Gov. Laura Kelly on Monday picked an experienced appeals court judge, who started her career in retail sales, to fill a vacancy on the state Supreme Court.

Judge Melissa Taylor Standridge, from Leawood, has served on the Kansas Court of Appeals since 2008. She previously worked for two federal judges and in private practice. Kelly picked her to fill the spot on the court created when Justice Carol Beier retired in September.

In Kansas, a nominating commission interviews candidates for the Supreme Court and forwards three nominees for the governor to pick from.

“There’s no question that Judge Standridge has gathered a wealth of expertise that makes her more than prepared to join the Supreme Court,” Kelly told reporters at an event Monday.

In addition, Kelly said she hopes that broad experience will give Standridge empathy with the parties in a case when considering legal arguments before the court.

“She’ll be able to put herself in their shoes and understand the implications of her thoughts and her decisions through their eyes,” Kelly said.

Standridge worked in management and purchasing at the Dillard’s department store chain, where she oversaw 250 people.

“That’s very important because each Supreme Court justice is a liaison for different districts across the state of Kansas,” Standridge said. “I have the experience managing people, dealing with employee issues or operational issues.”

She said she had been considering law since she was in 5th grade and decided to get a law degree before working in private practice.

In addition, Standridge has served as a foster parent and adopted four children.

“I hope that my diverse life experiences might meaningfully contribute to the Kansas Supreme Court’s process of interpreting and applying the law to the facts presented in each particular case,” Standridge said during the event with Kelly.

In the past, the group Kansans for Life has opposed Standridge because she sided with other judges in a ruling that said the state constitution protects the right to abortion.

A historic slate of choices

The commission had also sent Kelly two other choices for consideration. Kelly noted that for the first time all three nominees were women.

Judge Kim Cudney, from Greenleaf, is the chief judge of the 12th Judicial District in north central Kansas. She has also served in private practice and was the county attorney in Washington County.

Kristen Wheeler of Wichita has been a law clerk for a federal judge since 2018 and before that served in private practice.

“Each of the finalists is not only an impressive lawyer, each is firmly committed to serving her community and our state,” Kelly said.

This is Kelly’s third pick to fill a seat on the court since taking office in 2019. The three retirements came after the end of a long-running lawsuit over school funding in Kansas.

A spokesperson for the courts, Lisa Taylor, said this will be the second time there have been three women justices on the Kansas Supreme Court.

Some Republicans and abortion opponents have pushed to change how the justices are selected, to a system where the governor picks a nominee who is then confirmed by the Senate.

Kansas moved to the current nominating system in the late 1950s in response to a scandal. A lame-duck governor resigned and was then appointed to the Supreme Court by the new governor, who was only in office for 11 days. The scandal was known as the “triple play.”