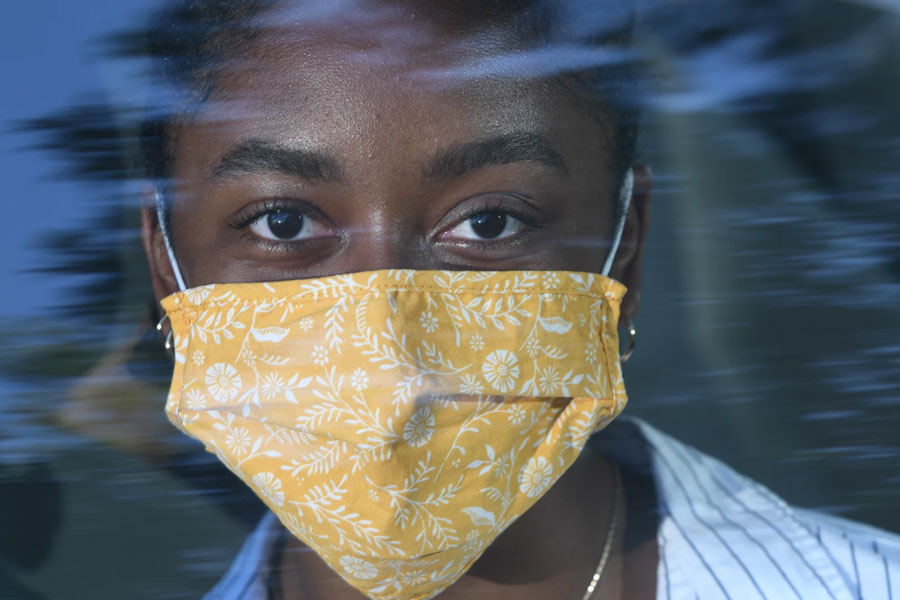 A woman wears a cloth mask, as recommended by the CDC and World Health Organization to slow the spread of COVID-19. Photo illustration. Carlos Moreno/KCUR 89.3

Dozens more counties in Kansas now require masks. The true number remains unclear as the dust settles on last week’s deadline for each county to decide.

That’s a sharp increase since the summer, when all but 25 of the state’s 105 counties rejected Gov. Laura Kelly’s statewide mask rules.

She pushed the issue by re-issuing a mask order this month. Previously reluctant local officials got a week to either go along with it — or once again buck her safety measures while COVID-19 cases overwhelm hospitals across the state.

Any county that didn’t take up the matter by midnight last Tuesday effectively let her mask order take effect.

Many voted before that deadline to come on board, but some tweaked or watered down the governor’s version. At least one, the Thomas County commission, calls for masks only when people are unable to keep six feet apart for longer than 10 minutes.

More than 20 county commissions voted to reject mask rules again. Among them was Haskell County, in southwest Kansas. After the meeting where the vote was held, someone who was there learned they had COVID-19. Haskell health officials subsequently asked everybody who attended the meeting to monitor themselves for symptoms for 14 days.

The Kansas News Service was unable to confirm the status in several counties. It can be a matter of interpretation. For example, different counties passing very similar resolutions declaring residents “should” wear masks posted them on their social media or websites with labels describing them variously as “recommendations” or “mandates.”

The Kansas News Service drew from tallies gathered by the Kelly administration and Kansas Association of Counties, but they sometimes conflicted with each other and from what we could confirm independently. We continue to list a number of counties as “unclear” because of conflicting information.

The chairman of the Wichita County commission told KNS that he would not disclose whether his county requires a mask or not.

Call your county health department or county commission if you have questions about mask orders in your area, how long they will be in effect, and which situations they cover.

Miami County, just south of Johnson County, is among those that rejected a mask requirement earlier in the year but has now gone along with Kelly. 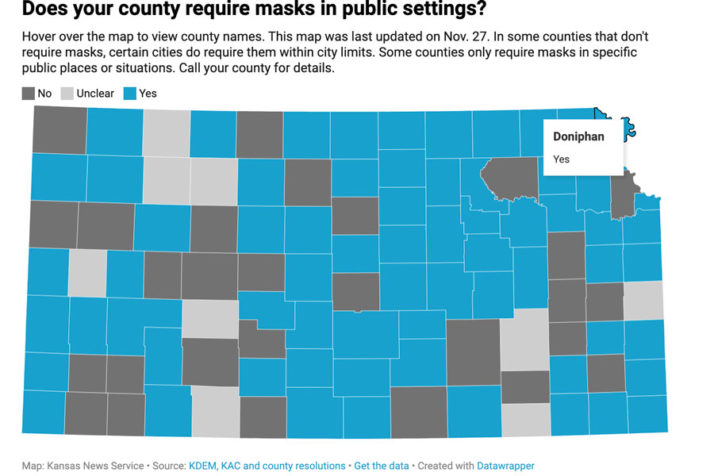 More than half of the 900 cases in Miami have been identified just since the start of October.

“(The) vast majority of comments have been on the positive side,” Roberts said. “There definitely (are) — and will always be — people who are anti-regulation of any kind. And we got a percentage of those, but it comes with the turf.”

On the other and, the Leavenworth County commission rejected mask requirements again.

“People fought and died for those individual liberties” that measures to control COVID-19 are infringing on, fellow commissioner Mike Stieben said. “Your right to decide if you wear a mask. People fought for those rights.”

All of the state’s counties with public universities now require masks, after Ellis and Riley came on board last week. But a few county commissions in areas that have seen some of the state’s worst COVID-19 outbreaks remain opposed.

The Ford and Seward County commissions are among them. Cases tied to meatpacking plants in the region fueled exponential spread in southwest Kansas counties early in the pandemic.

Some cities had already forged ahead even without support from county commissioners by passing mask orders that apply within their boundaries. That includes Dodge City in Ford County.

Seventy-six Kansas counties don’t have intensive care units, if they have hospitals at all, according to data compiled by Kaiser Health News. They shuttle critically ill patients to cities in ground and air ambulances.

But over the past several weeks, doctors have reported spending hours calling one hospital after another to find an available spot.

Last week, the state hired a software company to manage hospital capacity, find beds for patients in other facilities and arrange transportation. More than 30 hospitals in Kansas are now using the tool.

The program helped move 3,200 patients over the course of a few days and plans to include all of the state’s hospitals.

Many health care workers are feeling burned out, Kelly said in a news conference earlier this month.

“If this continues,” she said, “our state’s ability to care for patients, both with COVID and also those without, will be compromised.”

On a typical day last summer, Kansas was dealing with a couple hundred COVID patients sick enough to need a hospital bed. Now the number tops 1,000 some days. 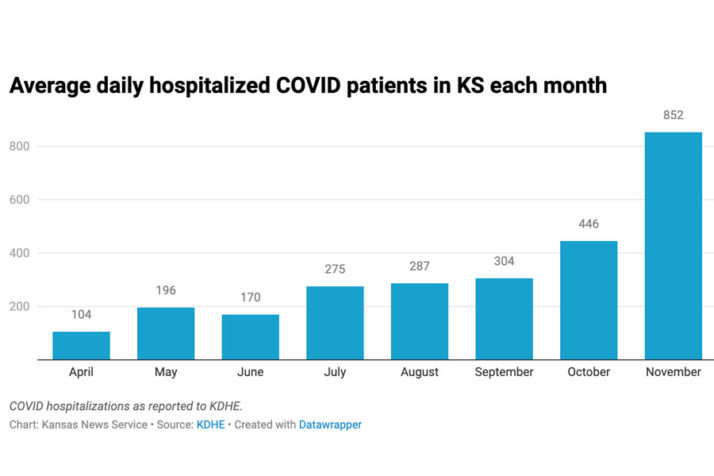 Major hospitals have set up more beds as fast as possible, sometimes in hallways and waiting rooms. Still, they’re understaffed and struggling.

As of last Friday, 20% of the University of Kansas Health System’s adult beds in Kansas City, Ks., were occupied with COVID-19 patients.

“There is not another disease,” physician David Wild said, “Not cancer, not heart disease, not anything … that takes up 20% of the beds in this hospital. Not one.”

The situation is so bad, he said, that even 10 more COVID patients showing up would be difficult to handle. Hospitals can’t simply turn away people having heart attacks or strokes or giving birth to make room.

And because more coronavirus are doubtlessly incubating — and families could swap a lot of germs over Thanksgiving and Christmas — they fear the current surge will get worse before it gets better.

Doctors at the KU Health System and elsewhere have begged the public to mask up for months.

It’s just one measure people should take to slow the march of COVID-19, scientists say. Other important steps include washing your hands thoroughly, using hand sanitizer and staying 6 feet away from people outside your household.

Kansas counties that adopted mask rules in July saw the spread of COVID-19 slow down, state and federal epidemiologists found. The Centers for Disease Control and Prevention published those findings last week.

Meanwhile, some counties have tightened limits on public gatherings in recent weeks.

A new health order for Sedgwick County limits them to 25 people. Masks will also now be required in all indoor settings and outdoor public gatherings, even when people have enough room to keep apart from each other.

The county is working with Wichita and other cities to enforce the order. Violators could end up in court with a fine of up to $500. That’s similar to an enforcement measure passed by the Johnson County commission earlier this month.

Many other counties, however, do not have penalties for refusing to wear a mask.

COVID-19 has killed more than a quarter million people in the U.S. and about 1,500 in Kansas.

This story was changed after the Kansas News Service discovered discrepancies between the state’s conclusions about county mask orders and what independent reporting could confirm.

Kansas News Service stories and photos may be republished by news media at no cost with proper attribution and a link to ksnewsservice.org