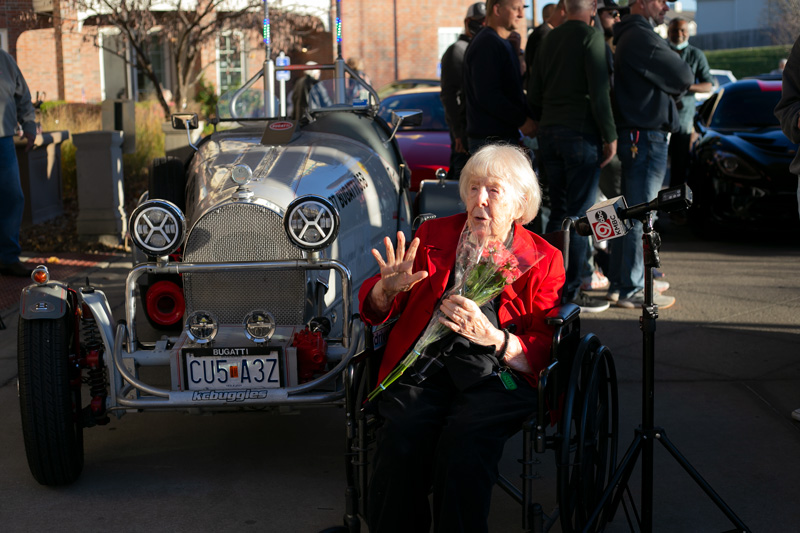 A Bugatti with Rides for Hope KC paid a visit to Bea Notley of Shawnee for her 100th birthday celebration.

After a lifetime of admiring the Bugatti race car from afar, 99-year-old Bea Notley had quite the early-birthday celebration at Shawnee Hills Senior Living.

It was a bright and sunny afternoon on Veterans Day earlier this month, just a few weeks before Notley’s official 100th birthday on Dec. 13. Notley watched as a 1927 Bugatti pulled to a stop in front of her.  A World War II veteran with the Women’s Army Corps and a long-time Latin teacher, Notley enjoyed the surprise visit from the Bugatti, which led a caravan of luxury cars specially arranged for Notley’s celebration, courtesy local nonprofit Rides for Hope KC.

“A hundred years is long, it’s a century,” she said. “But I think it’s been a good ride, and I’m glad I was born. I don’t know about my parents being so enthusiastic, but I am very pleased, and I’m a first-generation American.”

Rides for Hope KC also came out to celebrate the observance of Veterans Day that afternoon, along  with residents and staff at Shawnee Hills Senior Living.

“Today, we came out to drive some good for a woman that we heard has done a lot of good driving and a lot of good in life so far,” said Tracey Anderson with Rides for Hope KC. “Mrs. Notley, we heard about this fascinating story, and just with the love of cars that we all share, we just couldn’t get out here fast enough to show our respect and honor for Mrs. Notley.”

A lifetime teaching and serving

Born on Dec. 13, 1920, nee Beatrice Edith Low, she grew up in Detroit and spent her childhood participating in Girl Scouts. While at Thomas M. Cooley High in Detroit, she taught herself Latin and graduated in 1938.

While at Western College for Women in Oxford, Ohio, she continued to study Latin as well as English literature and also enjoyed playing bridge with her friends. After graduating, she enlisted in the Women’s Army Corps and served during World War II.

After the war, she enrolled at the University of Michigan on the GI bill to pursue a master’s degree. She met her future husband, Donald Notley, and they later married in Ann Arbor, Michigan, on Feb. 8, 1947. The couple had three children together.

“I am just absolutely stunned,” said Marianne Day Notley, her daughter. “The people at Shawnee Hills, they cooked this up. And Tracey, who has been speaking, she called me and said would it be OK if we do this? And I go, are you kidding me? It’d be fabulous. And Mom was really touched.”

Day Notley said her mother always talked about Bugattis to her and her siblings when they were little.

“When she was teaching, she had a photograph of a Bugatti, she kept it in one of the drawers in her desk,” she said. “And when she was having a bad day, she pulled out that picture.”

And on Veterans Day at Shawnee Hills Senior Living, Notley leaned forward to lay her hands on the 1927 Bugatti. She sang a few remnants of Army songs like, “Hail, Hail, the Gang’s All Here,” and she reminisced on her lifelong passion for the race car.

But, she said, she never owned a Bugatti.

“Sinning sometimes is kind of fun, so do a little coveting; I’ve got a Bugatti up here that won’t go away,” she said, pointing up at her head. ”Every time you see one of each other, say remember that day I was in front of Shawnee Hills, all those cars, all those people? It’s glorious, so thank you all very, very much.”