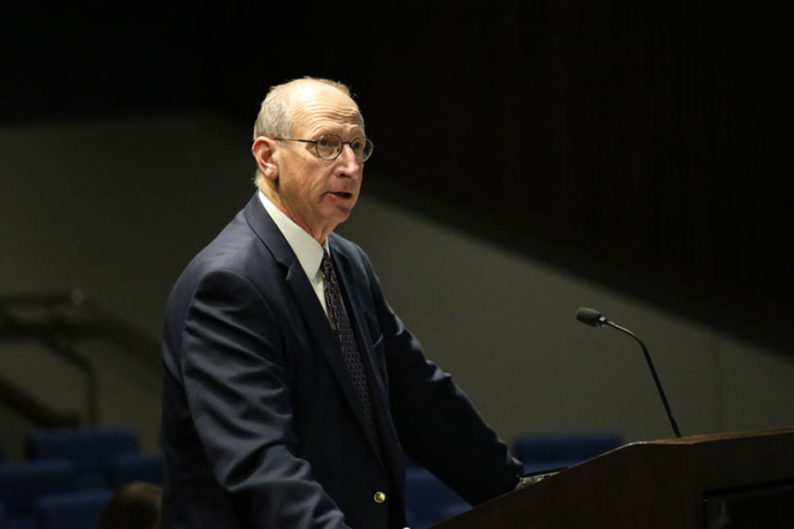 The Lenexa City Council has denied a rezoning request for an additional subdivision at Arbor Lake, a single-family residential development just west of Kansas Highway 7.

The city council’s decision to deny approval of rezoning and a concept plan for the new subdivision followed deliberations among city leaders who had concerns that the project lacked designated space for future commercial growth. The council also followed recommendations from city staff and the Lenexa Planning Commission to deny the request.

The vote was made after a lengthy discussion at the Nov. 17 city council meeting.

Located on 22 acres on the north side of Prairie Star Parkway between Shady Bend and Mize Roads, the site is zoned for commercial development. The applicant, Harold Phelps of Phelps Engineering, Inc., and property owner Arbor Lake LLC, proposed adding 47 single-family homes to Arbor Lake, a 98-acre residential development.

Councilmember Tom Nolte first made a motion to override the planning commission’s recommendation and vote in favor of rezoning the site. That motion required a two-thirds majority of the governing body but failed on a 4-3 vote. Councilmembers Nolte, Joe Karlin, Bill Nicks and Courtney Eiterich voted in favor. Councilmembers Mandy Stuke, Corey Hunt and Julie Sayers voted against.

The council also voted 4-4 to deny approval of the concept plan for the 47-lot project. Eiterich made a motion to deny the concept plan. Stuke, Hunt, Sayers and Mayor Mike Boehm voted in favor, while Nolte, Eiterich, Nicks and Karlin voted against. Councilmember Dan Roh was absent.

City staff had requested the developers preserve three to five acres of the 22-acre site for commercial uses, such as restaurant, convenience store, coffee shop, dentist or other business uses.

The city’s moves to preserve commercial areas in residential districts — also called “neighborhood nodes” — is part of the city’s newly approved long-term plan, Vision 2040, which encourages commercial activity to be developed within a 10-minute walk in residential areas.

“I think it would be irresponsible for us to have a vision in 2040 and just a few years down the road, start to change that vision because of a temporary situation,” Sayers said.

“We look long-term, and it’s our responsibility to plan a community long term, not sway with the COVID or current economic conditions,” Boehm said. “The character of the neighborhood, it’s changing. It’s residential right now because there won’t be anything else until that fills out. If we don’t preserve that opportunity for other things, it won’t be there.”

Several neighbors showed up in support of the rezoning to single-family residential. Some residents and councilmembers, noting the economic downturn caused by the COVID-19 pandemic, coupled with the growth of online retail, argued against the need for more on-site commercial spaces.

“I think that the pandemic we’re going through now really accelerated what was coming with the internet, and a lot of the different things that have happened in our lifetime,” Councilmember Karlin said. “I don’t think this is a temporary thing. I think restaurants will come back, but we have really, in my mind, as a society, just changed how we do things. We work from home now. Half of us probably will never go back into the office. A lot of us will get used to getting stuff delivered to us.

“It’s nice to believe that it’d be great to have commercial out there, but changing this particular tract, in my mind, from commercial to residential does not give me pause for concern at all.”

Some nearby tracts of land — including on a neighboring project for duplexes in Mize Hill — also have designated commercial areas. In that instance, the developer revised the Mize Hill project to preserve acreage for future commercial uses after city staff raised concerns about that project.

Noting this is the first project in her time on the city council in which the city staff recommended denial, Eiterich said she could see the project working out as a positive asset to the community as either all-residential or residential with a mix of commercial.

“I think in the back of my mind, I’m trying to gauge whether or not that three acres … would it even make a difference?” Eiterich said.

City staff also had concerns with the road layout of the proposed residential site at Arbor Lake. A stretch of uninterrupted road would have covered the length of the subdivision — city staff had concerns that traffic from Prairie Star Parkway or Mize Road would use it as a cut-through.