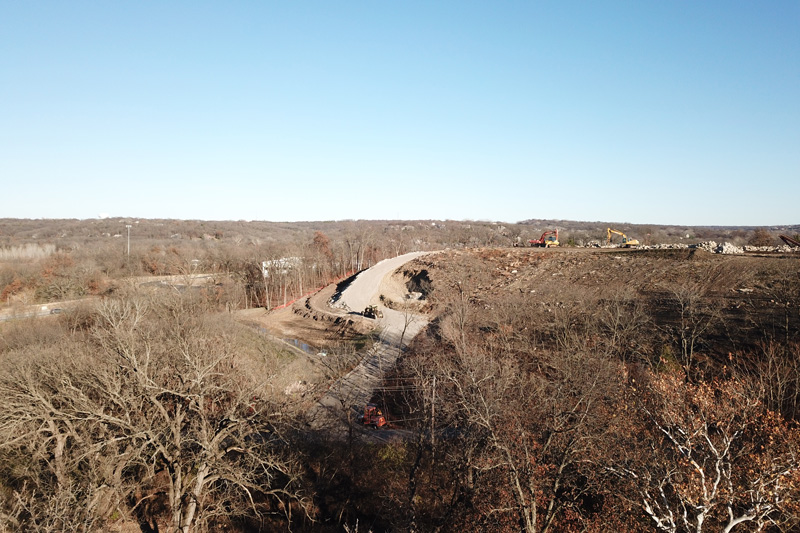 Much to the dismay of several residents in a quiet Shawnee neighborhood, a local excavating contractor is planning to spend the next five to 10 years removing rock and leveling a hill for a potential commercial development near Shawnee Mission Parkway and Woodland Drive. Above, a view of the site looking southeast toward Shawnee Mission Parkway. Image taken with permission from the owner of the property below the drone. Photo submitted.

Much to the dismay of residents in a quiet Shawnee neighborhood, a local excavating contractor is planning to spend the next five to 10 years removing rock and leveling a hill for a potential commercial development near Shawnee Mission Parkway and Woodland Drive.

Several neighboring homeowners largely oppose the project, mostly out of concern for the noise level while crews flatten the hill. Neighbors are also frustrated that the project will appear to take the better part of a decade to complete. They fear having a negative impact on their property values and trouble reselling their homes. The grading work has already removed part of the natural, forested habitat on the hill.

“It’s like living next to a rock quarry,” said Kevin Klemmer, who lives nearby with his wife, Lauren. “I can’t imagine what it’s going to be like when they really get going. Not only am I going to have to put up with this, you’re going to stuff this down my throat for 10 years? This is heartbreaking for me.”

A prime spot but difficult to develop

Kurt Brack of Brown & Ruprecht, the attorney representing LDL, said the company purchased the property in February. The city issued a low-impact land disturbance permit in April, and Max Rieke & Brothers began exploratory work on the site in the spring.

Brack said the companies are removing the hill and flattening it for development. The site is zoned for a mix of industrial, residential estate and commercial neighborhood uses.

“It’s going to take a little while; 50 feet of elevation, that doesn’t sound like much but it’s a fairly large hill,” Brack said. “They’re going to have to remove some of that in order to flatten it out.

“We don’t certainly want to become a nuisance, and we want to be a good neighbor,” he added. “Will there be some noise coming from the property by virtue of equipment trying to move some of the soil around, heavy equipment? Yes, there will be. But will it be within manageable levels? Yes we think so.”

At least seven neighbors who spoke to the Shawnee Mission Post disagree.

“I was told for years that they would never build there because of the amount of rock,” said Bob McElliott, a neighboring resident. “I think the city is letting the people of Shawnee down. They don’t care about our house values, our quality of life, and potential damage to our house.”

In a May 19 letter to neighboring residents, Community Development Director Doug Allmon noted that the excavation project is divided into two phases and could take five to 10 years to complete. Below is a copy of the letter: 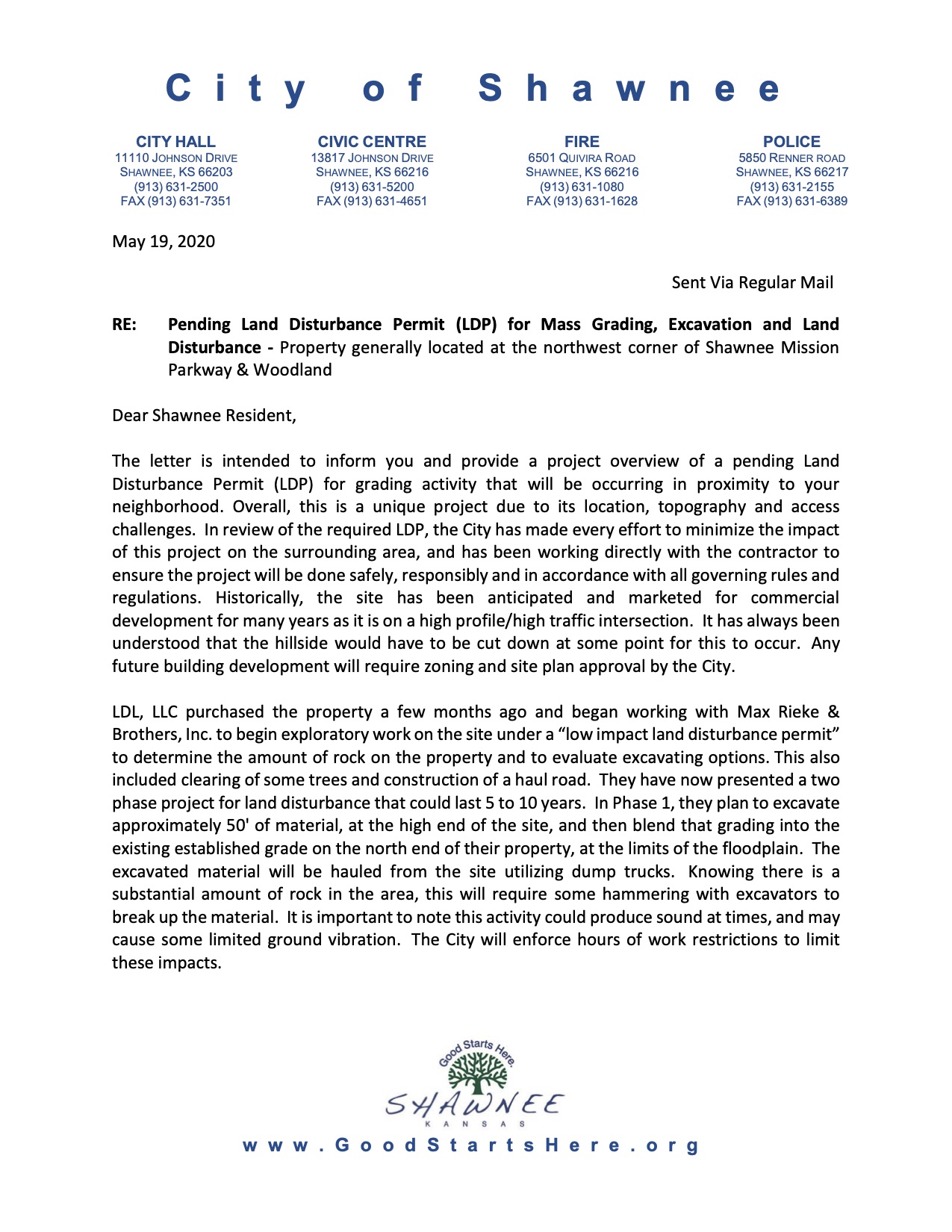 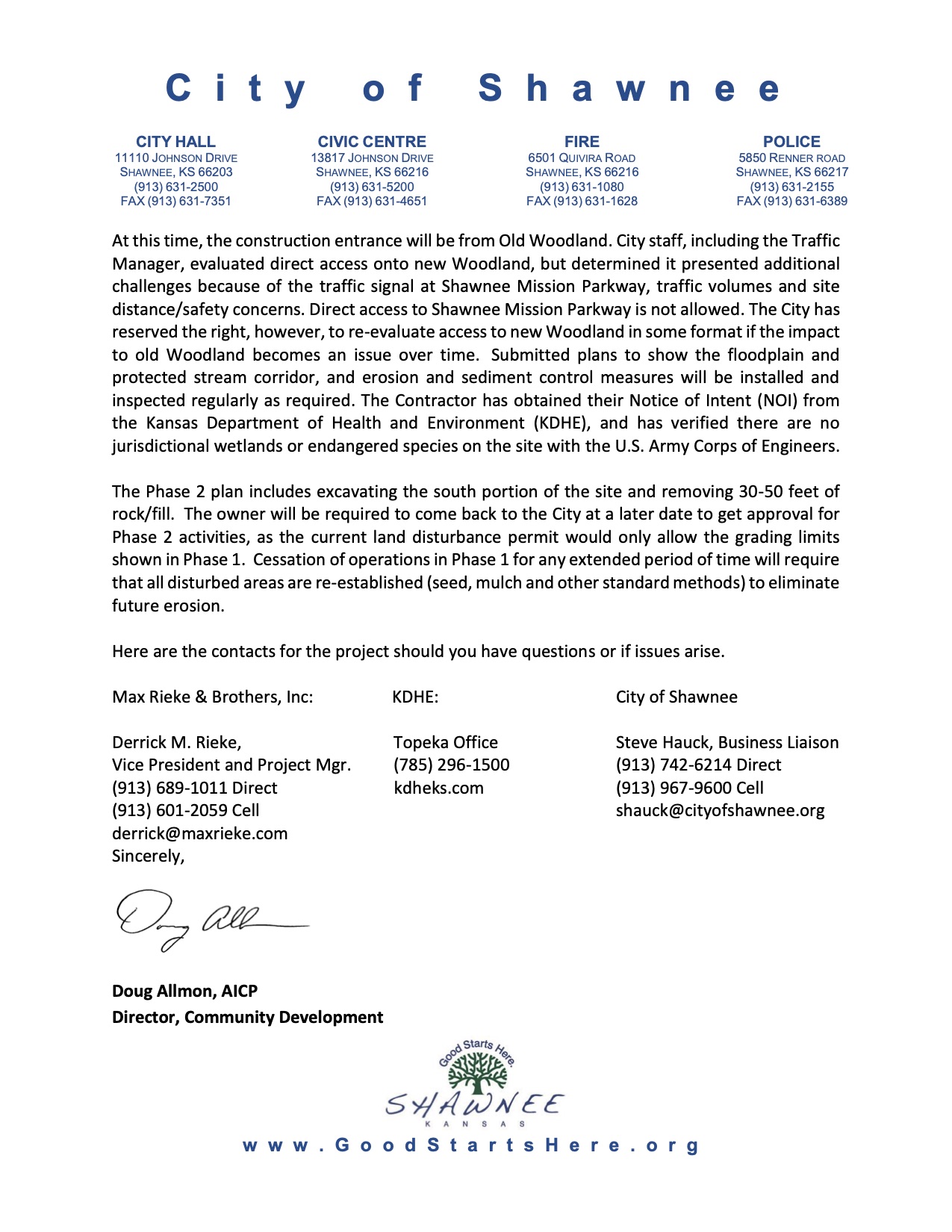 The letter indicates that Rieke plans to excavate about 50 feet of material — including rock — that would first need to be hammered and broken down in order to be hauled away.

“Overall, this is a unique project due to its location, topography and access challenges,” Allmon wrote, noting that the city “has made every effort to minimize the impact” of the project.

In the letter, Allmon noted that the site has been historically earmarked for commercial development due to its proximity to a high-traffic intersection. However, the hilly terrain has been a hindrance to such development.

“It has always been understood that the hillside would have to be cut down at some point for this to occur,” Allmon wrote, noting that future commercial projects will still have to be approved.

The city is not required to provide any public notice or offer public hearings for land disturbance activities, according to city staff. However, the city issues permitting only upon formal approval of the permit and plans by the Kansas Department of Health and Environment.

Shawnee city code defines land disturbances as “any activity that changes the physical conditions of land form, vegetation and hydrology, creates bare soil, or otherwise may cause Erosion or Sedimentation. Such activities include, but are not limited to, clearing, removal of vegetation, stripping, grading, grubbing, excavating, filling, logging and storing of materials.” A land disturbance is considered low impact when the site is less than one acre.

Regardless of the type of land disturbance, permitting for this triggers no public hearing or requirement by the city to communicate with neighboring property owners, according to city staff.

Concerns over impact on wildlife

The neighbors said they are also frustrated with the destruction of natural habitat on top of the hill.

McElliott said he’s especially concerned about bald eagles that have been spotted in the area, along with other wildlife.

“The whole natural habitat has been destroyed. I already had 20 raccoons in my yard the other day, because they tore their homes down,” he said. “You’ll never understand the damage they’ve done to the ecosystem out here.”

Brack said that it will be difficult for Max Rieke & Brothers to preserve mature trees and natural vegetation due to the elevation changes they’re making to the site.

“They’re trying to work around the schedule just to try to do it when they can,” Brack added. “It’ll be a gradual process, it’s not going to be an overnight deal.”

That gradual process is one of the main points of contention for the neighbors.

“I don’t like it, but I understand it,” said Jo Ann Courtney, whose backyard faces the site. “I don’t want the hill to change, but I understand the commercial value it would have to the city if it were a buildable site.”

Like her neighbors, Courtney takes issue with the lengthy timeline of the excavation project.

“My wish to them was if this has to happen, get in, remove the hill, and get out,” Courtney added. “I’ve seen much bigger projects done in much less time than five to 10 years. While we liked having the feeling of being out in the country, we knew that that wouldn’t last forever. But I never thought that when the time came for them to do something about that hill, that they would slap a five- to 10-year annoyance and disruption to our lives.”

Allmon noted in the May letter that sounds and “some limited ground vibration” are expected to come from the site. Some neighbors are concerned those ground vibrations could damage their homes.

“Right now, that’s my concern, where everybody acts like this is no big deal,” McElliott said.

Brack did not clarify the source of these misconceptions from neighbors. He said LDL may consider developing the property for commercial uses but is currently focused on flattening the hill. He did not specify the excavation project costs.

“My client has done its best to try to outline what’s out there and what the intent is, but a lot of people just don’t want change, and unfortunately, LDL is the owner of the property, I think they’re entitled to develop it. I understand people have some concerns about it, but this is LDL’s property, and as the city has indicated, they have a perfect right to develop it.”

City staff noted that the project is currently in the first phase, and the contractor has yet to apply for permitting on the second phase.