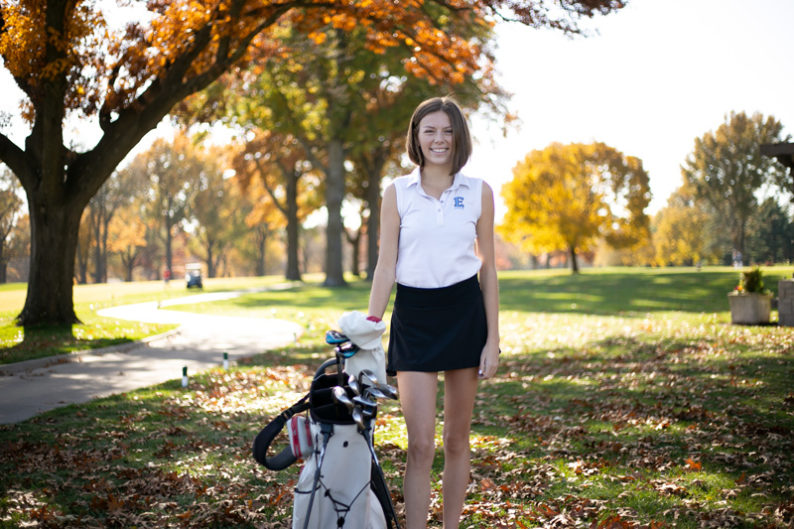 A senior at Shawnee Mission East, Quincy Hepler has just finished her final season of varsity golf and is going out a champion. The 2020 SM East Lancers Girls Golf team recently took the 6A state title victory, winning the two-day tournament by 62 shots. It was the squad’s second consecutive state title.

But at the start of the semester, it was unclear if there would be a season, after Shawnee Mission Schools suspended fall sports indefinitely in August amid the COVID-19 pandemic. Hepler and four other area high school girls golfers sued the Shawnee Mission and Blue Valley districts and were ultimately able to return to the course to play a full season.

A lifelong golfer with her family at Milburn Country Club in Overland Park, Hepler plans to pursue a business degree at the University of Kansas — unless a golf scholarship comes up at another school. Outside of golf, she says she enjoys working out and hanging out with her friends. She lives in Prairie Village with her parents, Jay and Julie Hepler, and her younger brother, J.P.

They closed down sports after like the first day we started. They gave us a week to wrap up, so we practiced a week knowing that we would not be able to practice again, or play. Obviously, that changed.

So my whole family and my teammates and I, we really felt like golf is one of the most, if not the most, safe sports to play, just because you have your own equipment, you’re not within a distance of someone. People have been playing summer tournaments all year long. So we just felt like it wasn’t necessarily fair to group a contact sport with a sport like golf.

So my dad went to the board and gave a speech about what he wants them to do — and other parents did as well for their kids’ sports — and the board didn’t agree with that. So we ended up filing a lawsuit in efforts to get a temporary restraining order, which would let us play for the week until we get a hearing in front of a judge.

I wanted the school board to reopen golf and let us practice and play tournaments, and go to state. I was very frustrated, just because — I wouldn’t like to say it’s not fair, but I think that our circumstances were a lot different than other sports. And out of five varsity players, we have four seniors, and I just didn’t feel like it was fair to my teammates that if they want to play in college, they could be losing out on an opportunity.

There was a lot of articles published, obviously, and we were on the news as well. My name was excluded because I’m a minor, but my father’s name, because he did the lawsuit, was out there, so everyone knew it was myself and three of my teammates that were suing.

So immediately, we got like Twitter, the articles are blowing up, there was comments that were saying we’re terrible people, they hope we get COVID, that we’re risking our grandparents’ lives, and I was really offended, just because I felt like most of the people that were commenting don’t understand what athletes are giving up when you’re not playing your sport your senior year.

It is a big deal your senior year for college recruits and coaches to be watching you. So I felt that a big part of our lawsuit was there was money that the school board could be possibly taking away from us if we’re not getting college scholarships.

That was our big thing, and that was written in articles, and people would write that, ‘Oh, we’re rich enough to go to college without a scholarship,’ which people don’t know that about us. People assumed the type of people my teammates and I were, and it was very hurtful.

That was the Twitter side. On the school side, there were classmates just kind of saying the same thing, teenage girls can’t be nice (laughs), just calling us not nice names and not being very good people.

I know that that particular point, money for college, did not affect me because I’m not playing college golf, but at the same time, there are still opportunities for me to get offers, and if I got an offer to go to Stanford for money, I wouldn’t pass it down. So I don’t think I should limit myself to not having that opportunity, nor should my teammates have been limited for that.

It was probably three or four days where it was a lot of comments, and a lot of this happened very fast. We didn’t have to go through it a lot, thank goodness; it was only a couple weeks of hate, and then we got back into it.

Golf was not something I liked to do for fun. It was just something I had to do. But as high school went on, I really enjoyed being with my teammates. I’ve known my teammates since we were 13, probably, so we’re all very close, and it means a lot to me to be able to spend time with them. We joke a lot, and we have fun, and my coach is a big part of that. He’s a great mentor and a great person overall, so he definitely helps me want to play.

I just think it’s important for people to know that myself and my teammates, we fought to be able to play, and that’s how athletes should operate. We’re going to always fight to do what’s right for our sport and our teammates, and we’re dedicated to getting to play.