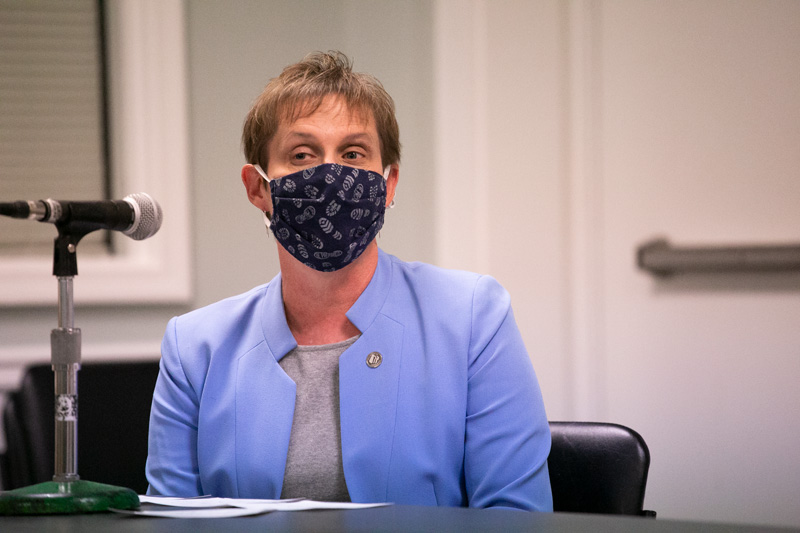 The last ballots to be counted in Johnson County put Overland Park Democrat Linda Featherston firmly across the finish line to win the 16th House District in the Kansas Legislature. That race had been hanging by a thread, with Featherston ahead by just one vote after unofficial votes were tallied last week.

The final totals approved by the Board of County Canvassers Thursday — which included provisional ballots — were 7,130 for Featherston and 7,063 for Young.

“I appreciate [voters] trusting me to be their representative, and I will work hard for them in Topeka,” Featherston told the Post Thursday night.

Featherston will replace outgoing Democratic state rep Cindy Holscher, who will move over to the Kansas Senate after winning the contest for the seat being vacated by Republican Senate Majority Leader Jim Denning.

Young told the Post he does not plan to pursue a recount.

Resolution for other close races

The official tally now puts Day over Republican Terry Frederick by 62 votes. The totals approved by the board are: 6,911 for Day and 6,849 for Frederick.

Thursday’s final count also means Johnson County Commissioner Mike Brown will not be returning to his seat representing the southwest part of the county. Brown was beaten by Shirley Allenbrand in the nonpartisan race for the Board of County Commissioner’s 6th District.

Brown had been behind by 2,092 votes, which increased to 2,233 votes as of Thursday. Brown accepted the vote count at the canvass board, which he attended remotely.

No other races were impacted by the new totals.

There are no automatic recounts in Kansas, but campaigns can ask for a recount until 5 p.m. the day after the canvass. The state will reimburse costs for recounts when the margin is one-half of one percent or less.

The election canvass is held to resolve ballots that were in question as Election Day ended.

On Wednesday, Election Commissioner Connie Schmidt broke down those ballots with her recommendations on whether they met the legal requirements to be counted.

She recommended 9,764 ballots be counted, and 2,242 not be counted, although those numbers changed by two — to 9,762 and 2,244, respectively — when it was discovered that one envelope contained two ballots.

By law, neither ballot could be counted if they both arrived in the same envelope.

Those that were recommended for counting had a variety of reasons for being held in the first place. Most were because people requested mail-in ballots but then voted in person. Others had technical issues, such as a correct ballot with a changed name or new address, signatures that did not match but were later proved correct, identification that was provided late or a voter registration that was held up in the last-days crush.

Of those not recommended for counting, most were from people who were not registered to vote, but some also did not live in the county or did not sign their envelope. Seventy-three ballots arrived too late or were postmarked after Election Day.

Two Johnson County races were decided at the canvass Thursday by coin toss.

Treasurer races in Oxford and Gardner townships each had a tie between two write-in candidates. Peter Pierson won the flip against Lexi Tarwarter for Oxford Township, and Donna Pearse won against Mike Casey in Gardner Township.

The Post’s Leah Wankum contributed to this report.