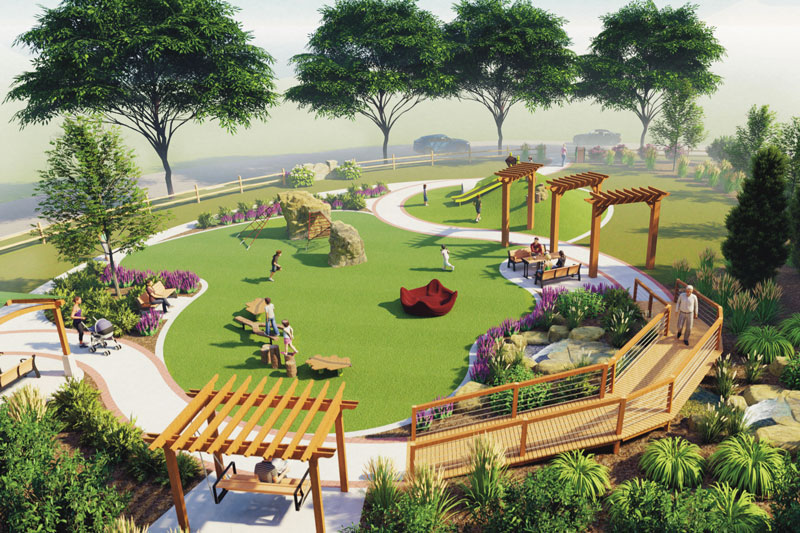 A rendering of the Kathryn Lyon Flora Park site plan shows what the pocket park will look like at 6030 Cherokee Drive, including play equipment and a waterfall. Image courtesy of Landworks Studio.

The city previously entered a contribution agreement with residents Paul and Susie Lyon, Kathryn’s parents, who donated land across the street from their house with the intent to turn it into a pocket park. Mayor Melanie Hepperly and Councilmember Tom Cotter both thanked the Lyons for their donation on Monday.

“This looks like a great addition to [the Reinhardt Estates] and for Fairway — it seems to be very well thought through, it really fits with the comprehensive plan,” Cotter said. “I wanted to thank the Lyon family for doing this, I think it will be a great honor for their daughter. I’m excited to see it come to fruition.”

Per the August agreement, the Lyons will have the final design concept approval and will cover the cost of any improvements. As it stands, the park will feature the following, as outlined in city documents:

City Administrator Nathan Nogelmeier said the Reinhardt Estates, the homes association the park falls in, has a deed restriction stating the lots can only be used for dwelling purposes. The HOA president Blake Reeves has been in contact with the city, and Nogelmeier said the city needs a majority of the 19 homeowners to release the deed restriction.

In response to a question from Councilmember David Watkins, Nogelmeier said a rendering of the site design was included in the 19 packets sent to homeowners informing them of the park. Nogelmeier said the city is leaving it up to the estates to determine how many homeowners need to release the deed restriction as the HOA is the one actively seeking signatures.

Parks and Recreation Director Brice Soeken said the project will go out to bid early to mid-December, and is aiming for a soft opening in April 2021. The goal is to have a larger celebration and a grand opening in July 2021, which coincides with Kathryn Lyon Flora’s birthday, he said.