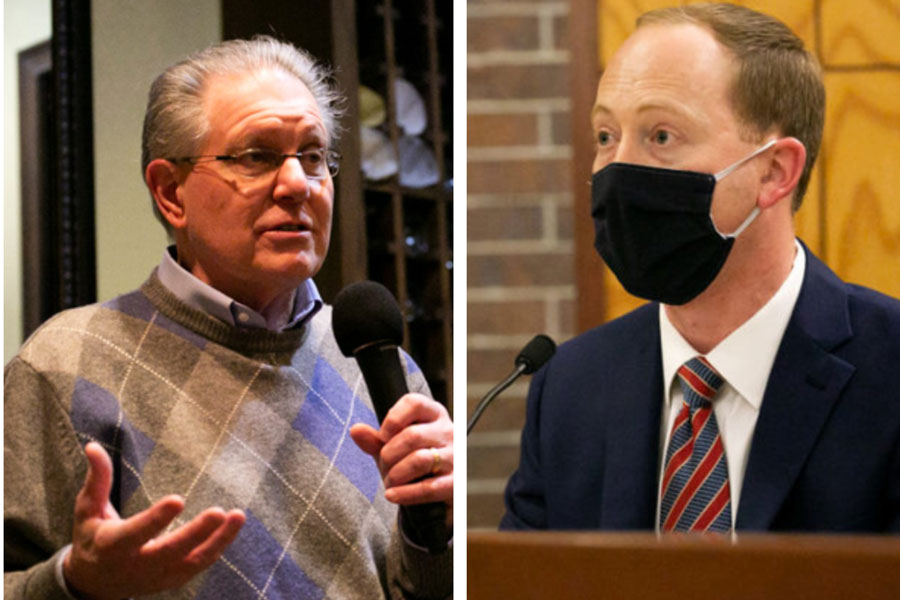 Election Night tabulations may still be unofficial, but Democrats and Republicans are already taking stock of what last week’s results say about where Johnson County voters land on some critical issues and what the county’s political climate is overall.

Compared to Kansas as a whole, Johnson County leaned bluer on Election Night. Democratic presidential candidate Joe Biden and U.S. Senate candidate Barbara Bollier both won the county by comfortable margins. And down the ballot, Democrats are on track to flip a state Senate district and two state House seats. (Republicans also still have a chance to flip a Johnson County House seat as vote counts head towards this week’s official canvass.)

Initially on Election Night, it looked as if the Democratic gains might be more sweeping, with early voting totals giving Democrats leads in nearly all the races on the Johnson County ballot. But strong in-person turnout by Republicans on Election Day helped the GOP catch up and dramatically narrow and, in many cases, completely wipe out those early margins.

Democratic state Rep. Brandon Woodard is one candidate who held on to his lead and appears set to win reelection in House District 30. He admits it was generally a tough night for down-ballot Democrats in Kansas and across the U.S., but he tried to take solace in the gains his party did earn.

“Obviously there were seats that we flipped this year, and to watch a county that narrowly voted for Donald Trump four years ago vote for Joe Biden by at least 8% is quite a shift,” Woodard said.

Medicaid expansion may no longer be on the table

Many Democratic candidates in Johnson County ran on the idea that, if elected, they could help break the years-long chokehold in Topeka on Medicaid expansion. Bills to do that have been repeatedly stymied in previous legislative sessions, both blocked by Republican leadership and vetoed by former Gov. Sam Brownback.

“Our state is crying out for Medicaid expansion,” said Ethan Corson, who swept to a wide lead in the race for the open seat in Senate District 7, which is being vacated by Bollier. “We absolutely have to get that done.”

But that may not happen, as Republicans on Tuesday appear to have expanded or maintained their majorities in the Senate and House, buttressed by Johnson County candidates who oppose expanding Medicaid. But Woodard said he still believes that Johnson Countians themselves overwhelmingly support it, especially in the midst of the still-raging COVID-19 pandemic.

He points out that a slate of Democratic House members in northern Johnson County, who like him are supporters of Medicaid expansion, fended off GOP challenges Tuesday night. Plus, two pro-expansion Democrats flipped Republican-held House districts.

“We have a chance to take the majority of Kansas House seats in the Johnson County delegation and be 13 of the 25 representatives [the county] sends to Topeka,” Woodard said.

Johnson County Democrats Chair Nancy Leiker admits she was hoping for a more decisive result, both in Johnson County and statewide.

“We’ll just continue on the path that we’ve been on, growing the number of precinct leaders and the number of volunteers,” she said. “I think that we’ve made a big difference over the last six or eight years, and we’ll continue doing that.”

Republicans in Johnson County who have been critical of Democratic Gov. Laura Kelly’s response to the COVID-19 pandemic, especially her attempt at a statewide mask order, may have renewed leverage on that issue when the legislature convenes in January.

Cases are rising rapidly in Johnson County and across Kansas, and public health officials are issuing increasingly urgent warnings about the need for Kansans to limit social gatherings and wear masks in order to control transmission of the disease.

But for GOP Sen. Mike Thompson, who is on track to win his race for reelection in Senate District 10 over Democrat Lindsey Constance, the bigger concern is the economy.

“You’ve got to balance the response with the economics of things,” Thompson said, citing the struggles of small businesses and restaurants amid shutdowns prompted by the pandemic. “You look at the states who haven’t locked down completely. They don’t have mask mandates, and they’ve done very, very well.”

Thompson has questioned the severity of the pandemic and used misleading assertions to cast doubt on official pandemic statistics. He says Kelly’s statewide mask order — which remains in effect in Johnson County, but not in most counties throughout the state — went too far.

“We shouldn’t be forcing people to wear a mask; I think it does have a suppressive effect on the economy,” he said. “I think that everybody now knows some of the rules of social distancing and things like that, and respect that.”

On Tuesday, Thompson and dozens of other Republicans gathered at a hotel in Overland Park for an Election Night watch party at which very few attendees were seen wearing masks or maintaining at least six feet of social distance.

For his part, Johnson County Republican Party Chair Fabian Shepard thinks his party’s results across the county on Tuesday show that Republicans still have a firm hold here.

“I think the evening met my expectations. Countywide numbers were right where I was in my mind,” he said.

He also noted that Democrats appeared energized this election season, with some candidates setting fundraising records in their districts, backed by organizations outside Kansas. But still, Republicans were able to hold their ground in key races, like Thompson’s.

“What we’ve seen demonstrated in this election is that the Democratic Party believes it can buy all the seats [here],” he said. “What we did [Tuesday] night is, hopefully, knock that idea out of their head. You’re not just going to come in and throw a bunch of money at it and walk away with the prize.”