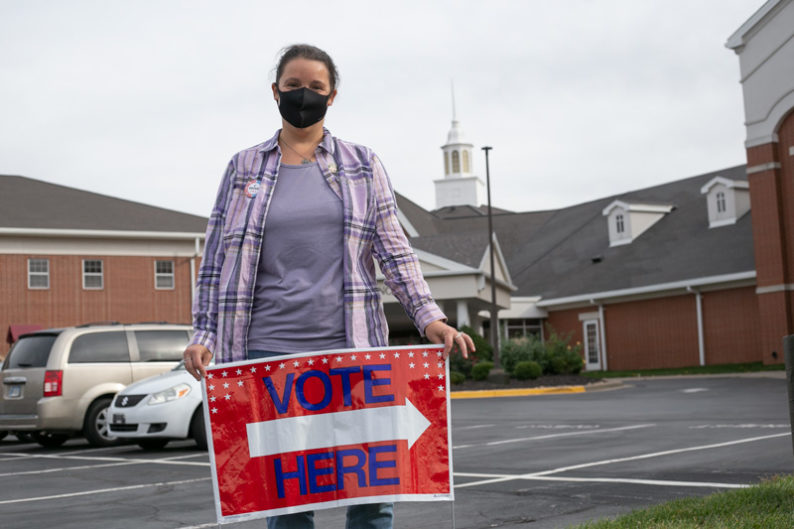 This past Election Day marked Shannon Skoglund’s third election cycle working the polls. She decided to become active in the democratic process by volunteering as a poll worker each even year since 2016. This year felt like it would be more stressful than usual, but Skoglund found her experience to be altogether different than what she had expected.

Outside of working the polls, she enjoys political activism and escapist television (she’s currently binge watching “Dr. Who”). A Johnson County native and product of Olathe schools, she earned her bachelor’s degree in computer science from the University of Kansas and has spent her professional career in software. She works at TouchNet, which is based in Lenexa.

She lives in Shawnee with her high school sweetheart and husband of 15 years, Eric Skoglund. They enjoy international travel together; their trip last summer took them to Indonesia.

Being a poll worker, you’re in an oasis of apolitical calm.

But when you’re at the polls, you aggressively, by law, can’t do any of that. You’re there for a single purpose. You stay busy, the time flies.

This year was the first August election that I’d ever done, and I wasn’t sure that I would volunteer because, of course, the pandemic. You are exposed to an awful lot of voters.

My husband is a teacher, he had the summer off and decided that he wanted to work at an advance voting location in August. So he spent two weeks doing that as basically a full-time job, which exposed him a great deal, and we did talk about it. He came home every day and took a shower straight away, cleaned himself off, put the clothes in the laundry, and generally reported it was a very positive experience.

And so based on that, I decided I would go ahead and work in August. I figured once he’d gone, that was my exposure too, so I wasn’t increasing our household exposure that much if I went, especially because I did successfully request being at the same location as him this year.

And part of it was because of the pandemic, typically election workers skew a bit older, and I thought maybe if I volunteered, that some person who was in their 70s or 80s wouldn’t have to work.

Of course, we couldn’t oblige voters to wear masks. The reasoning, of course, is you don’t want to impede the vote, and realistically, if you require somebody come in with something, that kind of amounts to a poll tax because it amounts to something they had to purchase or acquire to cast their vote. Even though we made some available, we didn’t have enough available for anyone and everyone to walk in with one. So I do strongly support the decision, though of course it’s frustrating because I want to be safe too.

The overwhelming majority of people who do come in are what we call perfect voters: they are registered voters in the right place who have an ID. But sometimes things don’t go quite right. People move in October. People move past the registration deadline. People accidentally show up at the wrong place. People show up with 10 minutes before close and can’t go to the right place. Or they’re just frustrated.

Sometimes these things happen, and we do what we can for them. Either we advise them to get their advance ballot if they have it at home, or we can advise them to go to their correct polling location, or we say we can process you here provisionally, and the election office can do the research to properly process your ballot further.

I thought we would have a lot more people who are angry and unwilling, but overall, it didn’t work out that way at all.

We had, I would say, just one lady who openly expressed her frustration, and she was justified to be frustrated. We were the second polling location she had come to, it still wasn’t the right place, and so of course she was upset. That shouldn’t have happened. She cast her ballot provisionally, and we needed her to fill out a new registration form, which she wasn’t happy about doing more paperwork, and I understand that also. But she was the only person we had that day who had such strong emotion.

My fears on that front were very much unproven, and I’m grateful to everyone who came and gave us the benefit of the doubt and cast their vote and participated in our democracy. I know that sounds cheesy.

Overall, it is absolutely the best place to be on Election Day. No matter how stressed out you are about how the outcome is going to go, because it is calm, it is apolitical, you stay busy, and you know that you’re participating in making democracy work. You know they need election workers to pull this off, to have so many voting locations, to make it as convenient as it is for voters in Johnson County.

So every voter that we process, everyone who walks through our doors and ends up casting a vote — whether they did it on a machine or on paper or as a provisional voter — they voted. They participated. They made their voices heard, and they did this democracy thing. We all have to.