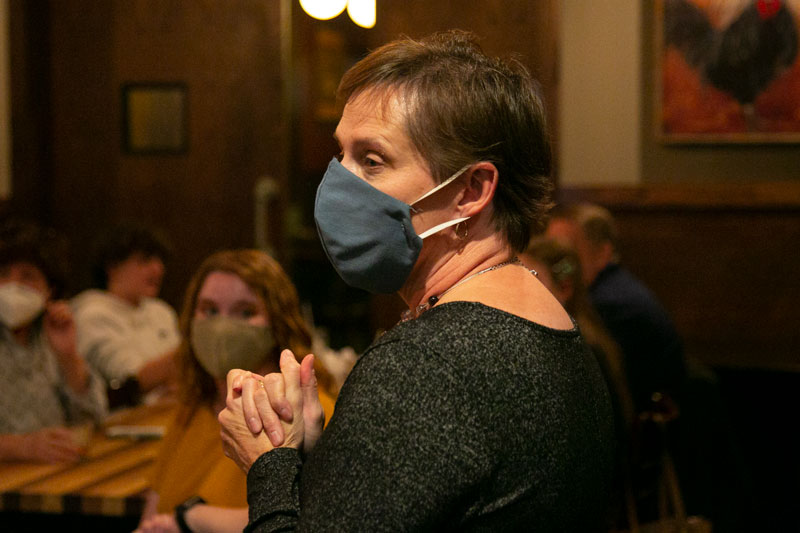 Democrat Linda Featherston gained 6,833 votes, or 49.11% of the total, and Republican Rashard Young trails close behind with 6,829 votes, or 49.08%. The two are vying for the seat held by Rep. Cindy Holscher, who just won her bid for state Senate, according to unofficial election results. Above, Featherston at a private watch party in her home in Overland Park.

After tallying mail-in and provisional ballots this week, the race for Kansas House District 16 remains too close to call. In fact, the candidates are separated by the slimmest of margins — one vote — heading into next week’s final canvass.

After a final round of mail-in and provisional ballots were added on Friday, Democrat Linda Featherston led Republican Rashard Young. As of Friday, Featherston had 6,906 votes, or 49.96% of the total. Young had 6,905 votes, or 49.95%.

That’s the inverse of the situation after the end of counting Thursday, when Young led by one vote.

At the end of Election Night on Tuesday, the unofficial count put Featherston up by four votes. A round of ballot-counting on Wednesday extended Featherston’s lead to 14 before Thursday’s count netted Young 15 votes and put him up by one.

No other race in northern Johnson County has seen appreciable change in its unofficial results since Tuesday.

Election Commissioner Connie Schmidt emphasized in a tweet Thursday that results will not be finalized until the county’s official canvass next week, which will start Wednesday.

Update on provisional ballots. Latest count including in person, by mail and Election Day equals 13,000 +/- Close races are not final until the canvass meeting on Thursday, November 12 at 4 pm. 🇺🇸🇺🇸

Both candidates say they trust the process

Featherston and Young are both first-time candidates vying for the seat currently held by Democratic Rep. Cindy Holscher, who won her bid for state Senate Tuesday, according to unofficial election results.

“I’m a teacher, and teachers love teachable moments, and this certainly is a moment that teaches us all about the importance of every single vote,” Featherston, who runs her own piano studio, told the Post on Wednesday. “So I hope we’ve all learned something about how important every vote and every voice is from this race.”

Featherston said she doesn’t plan to make any declarations of victory until provisional ballots cast on Election Day have been assessed, as well as any still-arriving advance ballots that can legally be counted up to Friday.

“We want to respect every vote,” she said.

For his part, Young said that Tuesday night was “really exciting but also nerve-wracking,” and he appreciates the support for his campaign.

“We’re waiting patiently right now,” he told the Post on Wednesday. “We trust Connie Schmidt and the Johnson County Election Office. They’ve done a tremendous job. I know this is probably not an easy situation for Linda either, so just praying for peace.”

The Johnson County Election Office noted that there are no automatic recounts in Kansas. However, candidates will be able to request recounts at the conclusion of the canvass for the election, which occurs in Johnson County Nov. 11-12. This week, county election officials are still counting mail-in ballots are coming in after Election Day and also provisional ballots cast on Tuesday.

“Those ballots could make the difference in close races,” election office staff reported in a pre-Election Day press release.