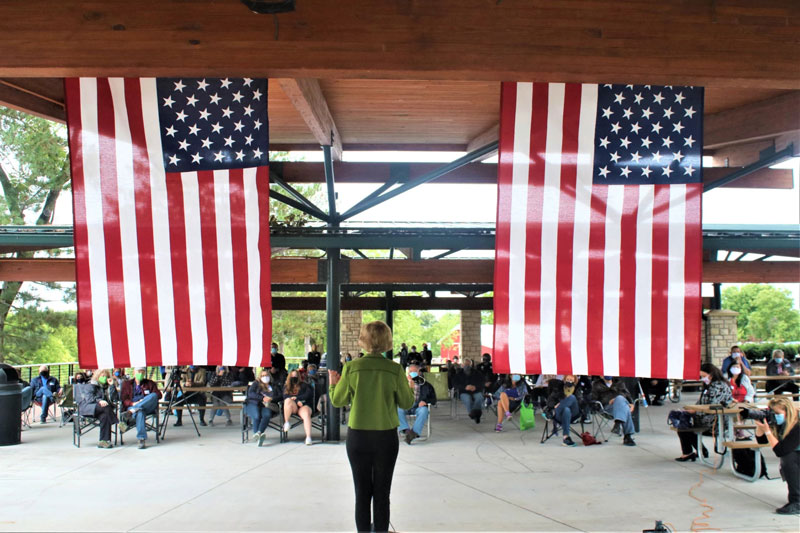 With some mail-in and provisional ballots still to be counted, a few close races could still go either way. Even so, there are a handful of big-picture takeaways we can glean from Tuesday’s unofficial election results in Johnson County.

As a note to our readers, the Johnson County Board of Canvassers is set to convene on Nov. 11-12 to formally tabulate the results and make them final. In the meantime, unofficial results from Election Night can be found here.

Election Night in JoCo went off without any major hitches

That’s not insignificant, considering the county’s well-documented struggles in both 2016 and 2018 to report results in a timely manner. And also coming as it did on an Election Night this year when anxiety and uncertainty reigned nationally in the presidential election (which remains undecided with votes still being counted in several key battleground states), Johnson County’s Election Night experience was remarkable for its efficiency and relative clarity.

Buttressed by an unprecedented wave of early ballots (more than 260,000 votes in Johnson County were cast before Election Day), unofficial final results were posted by the Johnson County Election Office by 8:30 p.m. Tuesday.

Under the leadership of interim Election Commissioner Connie Schmidt — who served previously as the county’s election head, between 1994 and 2005, and stepped in after former commissioner Ronnie Metsker resigned last year — the county appears to have experienced no major issues either in early voting or on Election Day itself.

This tweet from Schmidt sent early on Wednesday sums up the sentiments of many Johnson Countians this week:

This election dream team is the best in the nation – according to me!!🇺🇸🇺🇸 pic.twitter.com/atfL3CF4ql

A contested DA race ends with incumbent on top

Set against the backdrop of upheaval this year over the police killings of Black people, including George Floyd and Breonna Taylor, which put a national spotlight on law enforcement, Johnson County saw its first competitive face for District Attorney in 12 years.

Incumbent Republican Steve Howe, who hadn’t faced a challenger since defeating Phil Kline when he first won the post in 2008, and Democrat Zach Thomas, sparred over police use of force polices, the county’s win rate in jury trials and the DA office’s efforts to expand mental health court and crisis interventions.

Howe and Thomas also differed in tone. At a “Back the Blue” rally in October, Howe decried recent protests that have taken a violent turn in other U.S. cities and praised a St. Louis couple who faces an indictment for brandishing weapons at protesters this summer. Thomas said Howe’s remarks incited anger in an already charged atmosphere.

Thomas had a significant lead in the early tally. But with same-day ballots added to the count, Howe won with nearly 51% of the unofficial tally, to Thomas’ 47%.

Kansas state Sen. Barbara Bollier always knew she’d have to wrack up large margins in her home county in order to have a chance to be the first Democrat to win a U.S. Senate seat in Kansas since the 1930s. And though the Mission Hills native did beat Republican Congressman Roger Marshall in Johnson County, Marshall won by much larger margins in other parts of Kansas, especially rural areas.

Bollier took 51% of the vote in Johnson County, compared to Marshall’s 43%. That was lower than the nearly 55% share that Democrat Laura Kelly earned in Johnson County during her winning gubernatorial bid in 2018 over Kris Kobach.

Statewide, Marshall — who defeated Kobach, among several other rivals, in the GOP primary for U.S. Senate this year — garnered 54% of the unofficial final Election Day tally, compared to Bollier’s 41%, far outperforming many polls that showed the race would be tighter.

Bollier had endorsements from nearly 100 current and former GOP office holders and also set fundraising records, backed by national Democratic organizations. But in the end, it wasn’t nearly enough. Marshall hewed closely to President Trump throughout the campaign and repeatedly tried to paint Bollier as too “extremist” and “liberal” for Kansas.

That message appears to have resonated with voters, outside of Johnson County, at least.

Meanwhile, it should be noted, Democratic Congresswoman Sharice Davids won reelection comfortably, holding on to very nearly the same margin she won with the first time around in 2018, cementing Kansas’ 3rd House District as a blue island on the state’s Congressional map.

Running for the first time since switching parties in 2018, Democratic Sen. Dinah Sykes racked up a comfortable lead on Election Night over a Republican challenger in her mostly Lenexa district. And former Kansas Democratic Party Executive Director Ethan Corson held a wide lead in the state Senate district centered around Prairie Village, Fairway and Mission Hills, which is being vacated by Bollier.

But Republicans hold ground in some key contests

Northern Johnson County may be getting bluer, but there remain  pockets of strong conservative Republican support, and that was most on display Tuesday night in two much-watched state Senate races.

Incumbent Republican Mike Thompson, who has pushed for a broader reopening of the Kansas economy while questioning the severity of the COVID-19 pandemic, appears to have fended off a challenge from Democrat Lindsey Constance in District 10, which comprises, in part, a large chunk of western Shawnee.

Both Senate races were bitterly contested, with large fundraising totals and disputes over negative ads. Both Thompson and Warren declined the Post’s request to participate in public forums, and both placed an emphasis on in-person campaigning and traditional retail politicking, even during the COVID-19 pandemic.

That could have had an effect as Republicans seemed to have rallied in both districts on Election Night.

And Republicans still may have a shot at picking up a House seat in Johnson County. In the most closely contested race of the night, Republican Rashard Young trailed Democrat Linda Featherston in House District 16 by just 14 votes after vote counts were updated Wednesday.

That race remains too close to call and could be headed for a recount.