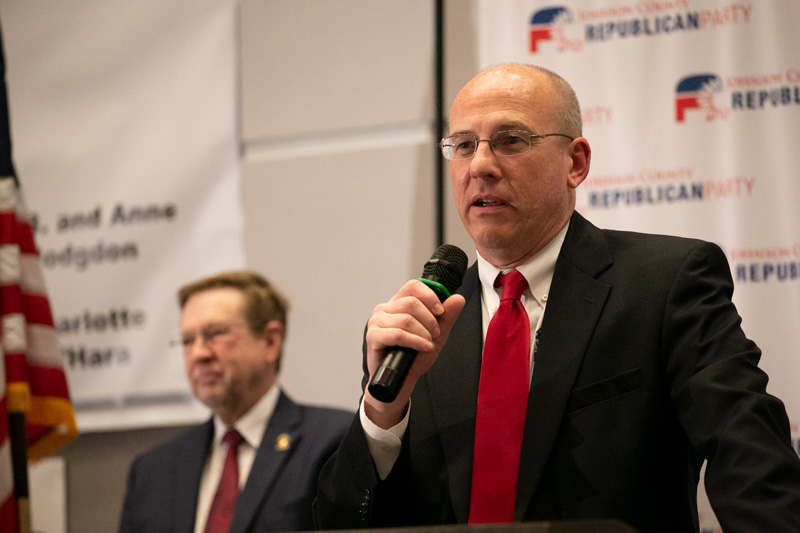 Steve Howe retained his job as the Johnson County’s top prosecutor Tuesday, fending off a challenge from Democrat Zach Thomas.

Unofficial election returns reported by the county election commission showed Howe with a four percentage point lead over Thomas, 50.6% to 46.6%.

It was the first contested election for county District Attorney in twelve years. Howe has not had a challenger since 2009, when he defeated former Republican incumbent Phill Kline.

“I just appreciate the voters’ confidence in allowing me to protect and serve for the next four years,” Howe said in remarks after his speech to guests at the Johnson County Republican Party’s watch party Tuesday night.

“I take my job very seriously, and it’s a very special feeling to know that I can make a difference in our community in keeping people safe. I have a great, dedicated staff, and I’m hoping that over the next four years, we can continue to make Johnson County a great place to live and raise our families,” he said.

Thomas, a defense lawyer in private practice, said the prosecutor’s office has been losing too many cases and needs a new leader. With violent crime increasing, he said the county’s win rate of 53% before a jury needs to be better. Howe said the county needs someone more experienced to lead its prosecutors through the backlog of cases caused by court shutdown due to the coronavirus.

Thomas said he called Howe and offered his congratulations Tuesday night after the unofficial results were announced.

“I’m very proud of the race we’ve run and very proud of the issues we brought to the campaign,” Thomas said, adding that he is encouraged that Howe indicated support for some of his platform, including mental health court and crisis interventions.

The race was against a backdrop of upheaval this year, as the police killing of George Floyd in Minneapolis put the spotlight on law enforcement.

Thomas said Howe’s office has not always enforced “stand your ground” self defense laws evenly, particularly when it comes to people of color.

Police use of deadly force emerged as an issue this summer with a string of police killings of Black people, from Floyd to Breonna Taylor to Michael Brown in St. Louis. Protest marches were held in cities throughout the country, with some of them turning violent. Police actions against protesters caught on video also became a subject of criticism.

Howe’s remarks at a “Back the Blue” rally in Overland Park last month in support of police also became a campaign issue, when he asserted that “the right people are going to get arrested,” in protests if violence were to erupt here. Howe was referring to the case of a St. Louis couple who was indicted after waiving firearms as protesters marched past their house. Howe’s comments suggested that in Johnson County, protesters would be the ones charged and arrested.

A police shooting in Johnson County also helped put attention on the prosecutor race. In 2018 Overland Park police officer Clayton Jenison fatally shot teenager John Albers, who is white during a check on Albers’ well being.

Albers parents have long questioned why the officer was not charged and asked for more transparency about the case. Then they learned that Jenison received a $70,000 severance payment from the city as he resigned.

Sheila Albers has said she believes law enforcement is covering up certain aspects of the shooting. The FBI has confirmed it is now investigating that case.