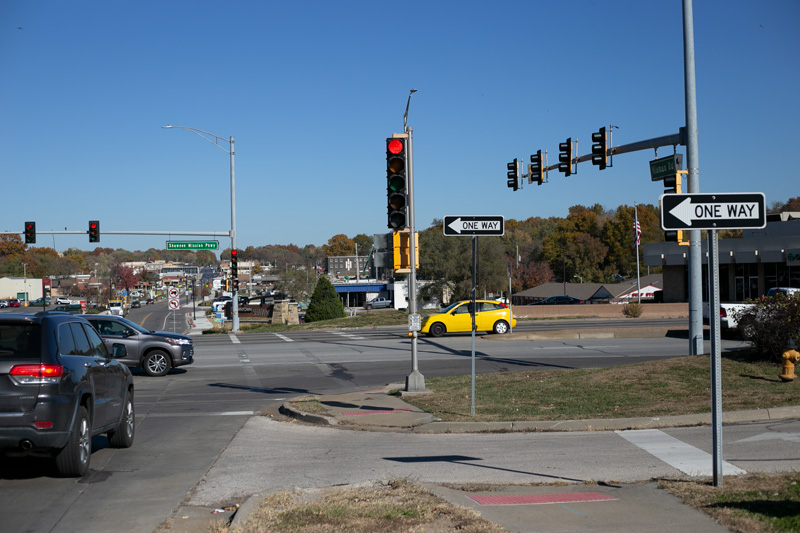 Shawnee is using some new federal transportation dollars to improve accessibility issues for pedestrians and cyclists along some sidewalks and traffic intersections in the city. Above, the intersection at Shawnee Mission Parkway and Nieman Road is on the project list.

Shawnee is using some new federal transportation dollars to improve accessibility issues for pedestrians and cyclists along some sidewalks and intersections in the city.

Shawnee received $475,000 in federal funds and will contribute an additional $125,000 in local funds to cover costs for the projects. The upgrades to 14 intersections across the city are designed to ensure they meet requirements by the federal Americans with Disabilities Act.

The city has budgeted $600,000 for design, construction and inspection costs for the projects. While all of the projects for improvements are spread across the city, many of them are located along Shawnee Mission Parkway, one of the city’s primary east-west corridors. One project also involves adding a crosswalk on Long Avenue crossing West 67th Street near Shawnee Mission Northwest High School.

Purpose of the improvements

In a virtual public meeting in late September, Kevin Manning, transportation manager for the city, said half of the designed intersections are funded, while the remaining projects will be funded as future dollars allow.

Manning said the purposes of the project are to:

Here are the 14 project locations for improved signals and sidewalks, running from east to west through Shawnee:

Manning said city staff selected these project locations due to their proximity to areas of higher activity. By selecting these areas, the city scored higher in the federal selection process compared with other cities in the Kansas City metro area.

“Obviously, Shawnee Mission Parkway is a major roadway; it’s very tough to get across without some kind of assistance or a signal to basically stop traffic one direction and allow the side street to go,” Manning said. “We need to make these improvements, but if we can get federal funds to help us, that really makes a big difference.”

The federal funds will cover half to two-thirds of the 14 projects, Manning said, adding that the city can apply for additional funding in the future.

The city will decide which projects to pursue first based on public input, pedestrian traffic data and costs per intersection, Manning added.

The Shawnee City Council will consider approval of the projects in late fall or early winter. Construction is slated to begin in spring 2021 and be complete by fall 2021.

A video of the virtual meeting can be viewed below.