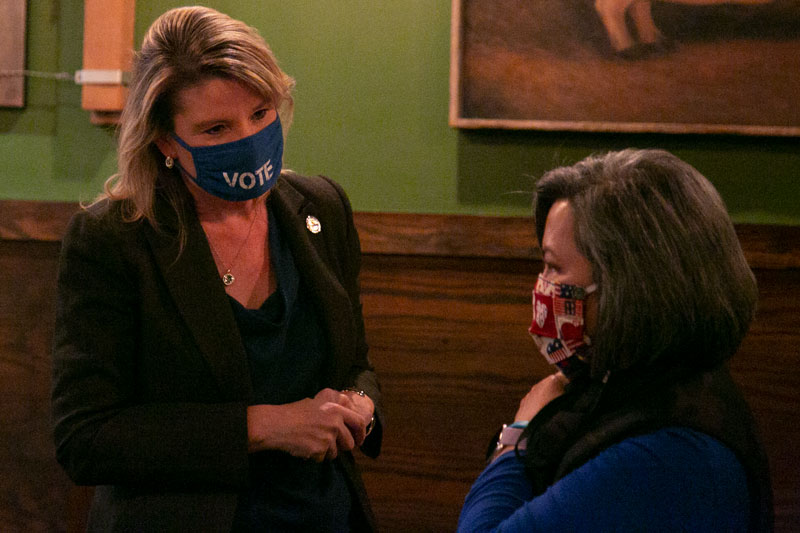 Both Republicans and Democrats can claim victory in some key races for Kansas legislative districts in northern Johnson County Tuesday night.

Overall, Democrats appear to have flipped one state Senate seat and two House seats in the county from red to blue, further cutting into the GOP’s supermajorities in Topeka, while Republicans hold clear leads in two hotly contested state Senate districts.

In one of the most closely watched legislative races in Johnson County this year, Republican Sen. Mike Thompson has appeared to fend off a challenge from Democrat Lindsey Constance in Senate District 10, which would keep that seat for the GOP after Thompson took it over in January, following Mary Pilcher-Cook’s resignation.

According to unofficial final Election Night tallies from the Johnson County Election office, Thompson leads with 51.4% of the vote to Constance’s 46.7%.

The race presented a clear choice for voters, with Thompson, a former TV meteorologist, and Constance, a Shawnee city councilmember, differing sharply on whether to expand Medicaid, the breadth of the state’s response to COVID-19 and climate change, among other issues.

“You know, obviously, we worked hard,” Thompson said on Tuesday night. “We were on the ground, walking house to house for six months. It was a hard-fought battle.”

He said he would like to focus on addressing the state’s high property taxes, particularly because many people face unemployment and businesses are under financial strains during the COVID-19 pandemic and related economic shutdowns.

Holscher is a two-term state representative who says she is “in touch” with the people in her district. As a mother of three kids, she says she understands the struggles of child-rearing and working during the pandemic.

“That’s why one of my top priorities in Topeka will be ensuring we’re still adequately funding our schools, even during the pandemic. COVID-19 adds an additional layer of needs for schools,” she told the Post Tuesday night.

She also said she will work to try and pass Medicaid expansion, which was blocked by Republican legislative leaders during the pandemic-shortened session earlier this year.

Holscher appears set to be one of three Democratic senators from Johnson County to be headed to Topeka in 2021.

She’ll join Sen. Dinah Sykes, who appears to have won reelection in Senate District 21 as a Democrat, after switching parties in 2018. She was leading Republican challenger Tom Bickimer, 54% to 44% on Tuesday. In addition, there is former Kansas Democratic Party Executive Director Ethan Corson, who is up in Senate District 7 over former Mission mayor Laura McConwell, 58% to 40%. That is the state Senate seat being vacated by Barbara Bollier, who ran for U.S. Senate this year.

Along with fully funding public schools and pushing for Medicaid expansion, Corson said legislators need to get on the same page about a more concerted response to the pandemic.

“We need to have a responsible, coherent approach to combatting COVID-19 so we can achieve a shared goal for opening up our businesses and schools in as normal a way as possible,” he said.

“I’m ready to lead our community and be your voice at the capitol, work hard for you,” Warren said after addressing the guests at the Johnson County Republican Party’s watch party. “It’s time to unite and get some things done, some results for our community and our state.”

For Koesten, it felt like a bitter loss. She lamented negative campaigning, funded by the Kansas Republican Party.

“I just don’t know how we break this chokehold. Think about the money that was spent on this race for a lot of mudslinging,” she told the Post Tuesday. “Republicans like my opponents who would not show up for debates and forums, and still won. That does not bode well for Kansans.”

Warren was one of nine Republican candidates who declined the Post’s offer to participate in election forums this year or simply did not show up.

It was better news for Democrats in two House districts in which moderate Republicans had previously held seats.

In House District 17, gun control advocate Jo Ella Hoye led Republican realtor Kristine Sapp by a margin of 50% to 45%,  with Libertarian Michael Kerner pulling in 3%. That is the seat currently held by moderate Republican Rep. Tom Cox, who challenged Thompson for his Senate seat and lost in August’s primary.

If those results hold, it would appear Democrats would have eaten into the GOP supermajority in the Kansas House. Democrats, overall, needed to pick up just one seat statewide in order to do that.

“Without that hold, Republicans are going to have to come to the table and work out compromises,” Poskin told supporters in a virtual rally Tuesday night hosted by the Kansas Democratic Party.

Like other Democrats on Election Night, Poskin vowed to fight for Medicaid expansion and secure adequate funding for public schools amid the pandemic.