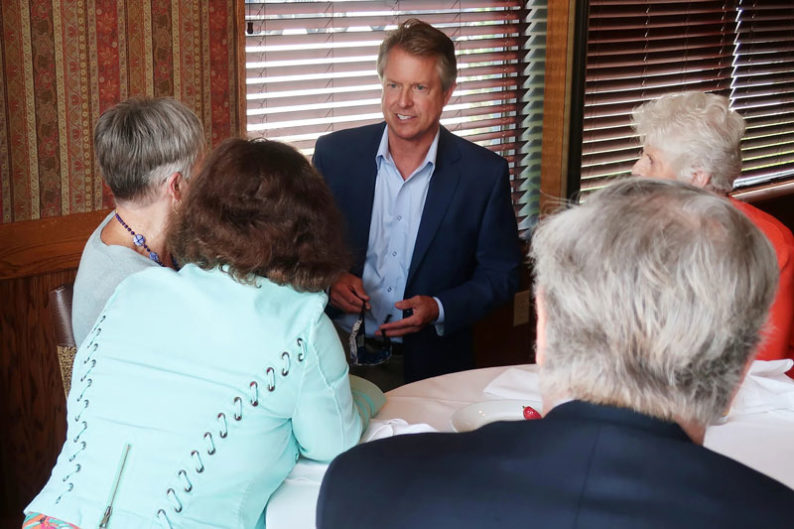 Kansas Republican Congressman Roger Marshall is moving up to the U.S. Senate after surviving a challenge from Democrat Barbara Bollier in Tuesday’s election.

The 60-year-old two-term congressman from Great Bend will succeed Republican Pat Roberts, who is retiring after nearly 40 years in Congress. Marshall’s win also keeps intact Republicans’ winning streak in Kansas U.S. Senate races, a streak that dates back to 1938.

The Associated Press called the race for Marshall just after 10 p.m., with 52% of the vote and the majority of Kansas precincts reporting. He had a 9 percentage point margin of victory.

Marshall’s closely aligned himself with President Donald Trump, who won Kansas by 12 percentage points, short of his 2016 margin of 21 points.

Marshall moved to the right — closer to Trump’s positions on immigration, trade and a host of other issues — to win the Republican primary in August over a crowded field that included Kris Kobach, former Kansas secretary of state and the GOP nominee for governor in 2018.

During the general election campaign, Marshall took a page from the Trump playbook, warning there would be dire consequences should Democrats take control and implement their “extremist” agenda.

Bollier, 62, used endorsements from nearly 100 current and former GOP officeholders to counter efforts to paint her as “too liberal” for Kansas.

The state senator from a well-to-do Kansas City suburb left the Republican Party in 2018. But her record-setting fundraising and the strategic help she received from Democratic Gov. Laura Kelly and national Democrats couldn’t put her over the top.

Marshall will succeed Roberts, who is the only person in U.S. history to have served as chairman of the agriculture committees in both the House and Senate. Marshall, who is on the House ag committee currently, has said he intends to land a seat on the Senate’s committee.

(Note: Counties will send their election results to the state within two weeks and the state’s Board of Canvassers must meet by Dec. 1 to certify the election.)

Editor’s note: This post will be updated with results as The Associated Press calls the races.