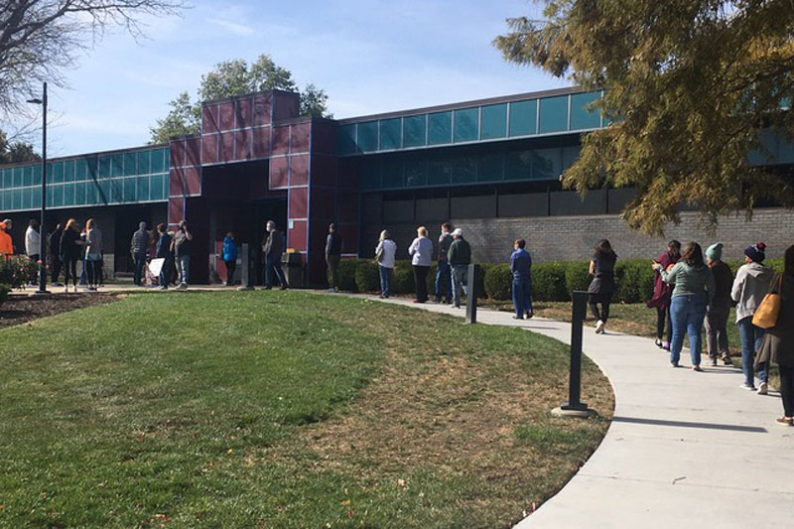 Whether you've been planning to vote in-person on Nov. 3 or haven't turned in a mail-in ballot just yet, the Shawnee Mission Post has a list of frequently asked questions to prepare you for voting on Election Day 2020. File photo.

Election Day 2020 is tomorrow, Nov. 3, and Johnson Countians who haven’t voted early — or who are still holding onto their mail-in ballots — may still have a few questions about how to navigate the polls on Tuesday.

The Shawnee Mission Post has compiled a list of frequently asked questions related to voting in these unprecedented times, some of which we have reported on in past coverage (such as our 2020 Voter Guides.)

Our commitment is to make the voting process as transparent and navigable as possible for our readers.

Where can I find my polling place?

Johnson Countians can find their designated polling place online through the election office website. Polling places are subject to change, so the county election office encourages voters to double-check their location before heading out. (For instance, dozens of polling places have been changed since August’s primary election to accommodate for potentially bigger crowds on Tuesday.)

Do I have to wear a mask?

Voters are not required to wear a mask, per a recent press release from the Kansas Secretary of State Scott Schwab. Schwab said in the release that “exercising one’s right to vote should not be contingent on whether or not they wear a mask.”

Still, county health officials encourage anyone going out in public to wear masks at all times, in compliance with the county’s mask order, which is in effect until at least Nov. 15.

Meanwhile, poll workers are required to wear masks inside polling sites, according to guidance recently re-issued by the Johnson County Election Office after numerous voters and poll workers complained during early voting that some poll workers were not wearing masks.

Will I be safe from COVID-19 at the polls?

While voters are not required to wear a mask to the polls, there are several safety measures in place, including a requirement that poll workers wear masks. (County election officials recently re-issued that guidance after numerous voters and poll workers complained during early voting that some poll workers were not wearing masks.)

Johnson County Election Commissioner Connie Schmidt previously told the Post about the following safety measures in place for Nov. 3 — all of which were in place for the August primaries:

Should I expect to have to wait in a long line?

The chances of waiting in a long line have been decreased by the eight ballot drop boxes and 10 early voting poll sites, Schmidt previously told Post Editor Kyle Palmer. If people voted early, coupled with the nearly 180 polling sites that will be open on Nov. 3, the chances of long lines and big crowds aren’t as high as they normally would be for a presidential election.

As of Saturday, Oct. 31, Schmidt said 57% of all Johnson County voters had already cast ballots, either through mail-in ballots or early in-person voting.

What if I feel like someone is pressuring or intimidating me at the polls?

President Trump encouraged supporters to “go to polls and watch very carefully” in the first presidential debate in October, and critics saw it as an attempt to intimidate voters.

Poll watching is a legal practice when a representative of a political party, campaign or organization watches polls for potential violations or irregularities. While poll watching is legal, Schmidt previously told the Post that official poll watchers designated by candidates must submit paperwork to election judges on site and will be issued an ID badge.

Additionally, these official poll watchers must stay six-feet away from the check-in table and cannot speak to voters while at the polls.

Schmidt said voter intimidation in Johnson County, historically, has been rare. If voters feel like they’re being pressured or intimidated, they should call the election office at (913) 715-6800.

What if I ordered a mail-in ballot that I haven’t mailed back yet?

There is still time to turn them in — and a few different ways to go about it.

If returning by mail, the mail-in ballot must be postmarked no later than Election Day, Nov. 3. Otherwise, voters can personally return their filled-out mail-in ballots in one of three ways:

However, mail-in ballots dropped off on Election Day at any of the above locations will not be processed until Nov. 4 and will not be included in any of the announced Election Night totals, Schmidt said. But your vote WILL count in the county’s final, official election canvass, set to be held Nov. 12.

When can I expect results in Johnson County to be announced?

Johnson County saw an unusually high number of mail-in ballots this year, and coupled with the emphasis on early voting, Schmidt has previously told the Post the county could have unofficial Election Night results taking shape relatively early on Nov. 3.

Early voting tallies from mail-in and early in-person polling places will be the first results reported on Tuesday, and those totals are expected to be released by 8 p.m., Schmidt said. Though results at that point will be incomplete and unofficial, it may give voters and candidates a “good idea” of where many races stand, she said.