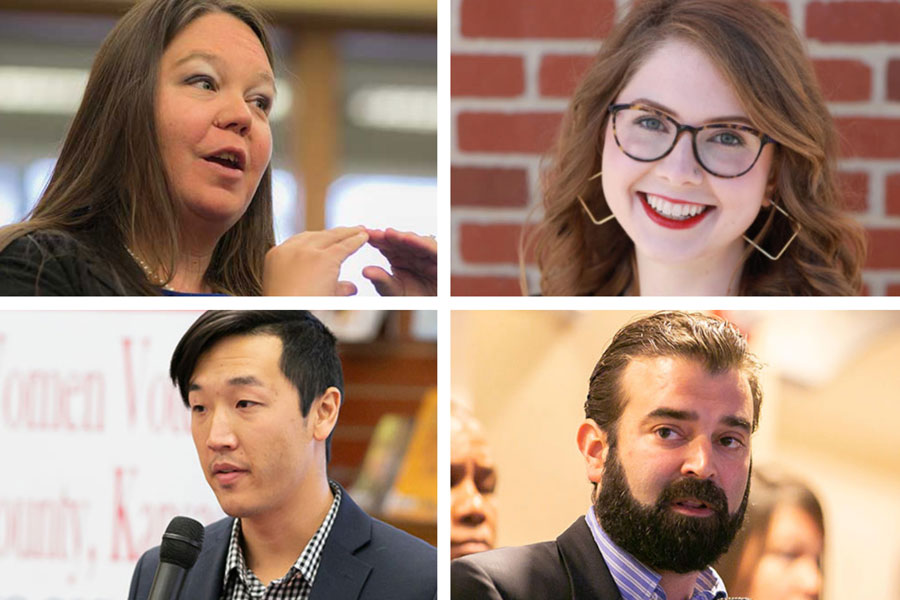 For decades, the conventional wisdom went that Johnson County was strong territory for Republicans, with the number of registered party members far outpacing Democrats.

Republicans still maintain a double-digit percentage lead over Democrats in terms of number of registered voters, but the results of the past two federal election cycles combined with an unexpected development in this year’s local statehouse races suggest Democrats’ prospects here are looking up.

The four candidates — incumbent Reps. Stephanie Clayton, Jarrod Ousley and Rui Xu, along with political newcomer Lindsay Vaughn — are all running in districts in northeast Johnson County that have either flipped from red or turned more solidly blue in recent elections.

Nancy Leiker, chairperson of the Johnson County Democrats, says the party has had a firm toehold in the county’s northeast corner for some time now, but she says the party’s map has been edging further south, too.

“We’ve always said that inside that 435 loop, we’re pretty solid,” Leiker said. “But two years ago, we got several districts outside the loop.”

But Patrick Miller, a University of Kansas political science professor, said increases in voter registration in suburban areas have been seen nationwide, and Johnson County is on par with this national trend. Miller said that’s having an impact on the county’s ideological leanings.

“Johnson County is a blueing county,” Miller said. “It was solid red not too long ago. It is at least purple now, and it may be transitioning over to a light shade of blue.”

In years past, Leiker said some voters would register as Republicans so they could vote in the Republican primary but then vote for Democrats in the general election. Leiker said she thinks more voters who fall within the Democratic Party are now registering that way from the start because, as she puts it, the party’s platform is aligning more with Johnson County voters’ changing beliefs.

While the numbers show a sharp increase in registered Democrats, Miller said voter registration numbers aren’t as telling as how people actually vote. Whether or not the county’s political climate is changing will be best determined after Election Day.

Despite the recent increase in registered Democrats, local Republican Party officials remain confident about their long-term hold on the county.

Fabian Shepard, the new Johnson County Republican Party chairman, said while he’s not pleased with four Democrats running uncontested, the party will work to recruit viable candidates in the future.

“I would say it disappoints me, and will not happen in the future,” Shepard said. “Many people believe that our party has ceded northeast Johnson County, and that’s not the case.”

Shepard argues the four uncontested races and where they’re at geographically may dispel the narrative that Democrats are more inclusive and the GOP the party for rich, white people,

“What we see is the highest concentration of wealth is in northeast Johnson County,” where these uncontested races are happening, he said.

Additionally, Shepard, who is Black, said he thinks the county’s growing political fault line “demonstrates the fallacy” between what the Democratic Party says it values and what some of its voters do in actuality.

“We have a lot of people on the left who say, ‘I support Black Lives Matter, I believe in equal opportunity and equality,’ but the way they vote doesn’t demonstrate that,” Shepard said. “If you look at the Prairie Village City Council, it’s all white. If you look at the leadership in the government in that area, they’re all white.”

There is a prominent Republican running unopposed on the ballot this year: Johnson County Sheriff Calvin Hayden.

Hayden has made public safety and support of law enforcement central to his reelection bid. Earlier in October, at a “Back the Blue” rally in Overland Park, Hayden said his department was “ready for any social unrest” around Election Day.

Below are the four Democratic candidates running uncontested in the 2020 general election for Kansas House seats within the Post’s coverage area, their policy priorities and their thoughts on the county’s changing political climate.

Rep. Stephanie Clayton is running for re-election to the Kansas House District 19 seat. Ahead of the general election, Clayton said her top three campaign priorities were taxation, education and transparency in government.

Clayton said she’s looking at providing tax relief for families impacted by COVID-19 and retired seniors who have been “double-taxed,” as well as ensuring public education is solidly funded. She said she’s been working on making the legislature more accessible to everyone since before the pandemic, and with COVID-19 in the mix, transparency is of the utmost importance.

She’s heard constituents talk about taxation and education, which aligns with two of her top priorities. If the political climate is changing in District 19 and surrounding districts, Clayton — who was one of a handful of legislators from Johnson County, including Bollier, who switched from Republican to Democratic after the midterm election in 2018 — said it’s happening slowly.

“I was never really a party type of person anyway,” Clayton said. “I always voted district-first no matter who it irritated at the party level. I don’t suppose I’ve made a lot of Democrats happy since I switched… but, you know, to me, it’s my people first.”

Despite her 2018 party switch, Clayton said she’s not sure if she’s surprised to be unopposed. Either way, she said she’s still doing a little bit of campaigning because “the people that I represent deserve to have me earning their vote.”

Lindsay Vaughn is running for House District 22, the seat being vacated by Rep. Nancy Lusk. Vaughn said her top three priorities ahead of the election were healthcare, education and racial justice.

Vaughn said as she’s been talking to voters in her district, it’s evident those are the issues they also care about. Healthcare, specifically Medicaid expansion, is often the first thing constituents bring up, she says, followed by ensuring public schools are fully-funded during COVID-19.

Voters have also talked to Vaugn about reforming the criminal justice system and taking immediate steps to increasing racial equality throughout Kansas, she said.

Overall, Vaughn said she thinks her experience as an uncontested Democrat does reflect bigger changes throughout the county. While increasing Democratic support wasn’t the only piece that led her to running uncontested — support and mentorship from her predecessor made a difference, she says — Vaughn said it played a role.

“Northeast Johnson County has been trending blue for a while now, and increasingly the GOP is supporting extremists who are out of touch with the [county] electorate,” Vaughn said.

Rep. Jarrod Ousley is up for re-election to House District 24, a seat he’s held since 2014. His top three priorities are establishing an Office of the Child Advocate, Medicaid expansion and fully funding public education.

Over the years, Ousley said he’s worked with the child welfare system and a pre-pandemic hearing about the establishment of a child advocate office went well. In addition to supporting Medicaid expansion and education funding, Ousley said he hopes to work to pass a bill allowing individuals to flag themselves for a “no buy” list for firearms for suicide prevention.
When he was first elected in 2014, Ousley said he recalls being one of just two Democrats out of 25 members from Johnson County sent to the Kansas House that year. Now, he points out, there’s 11 Johnson County Democrats in the chamber.

Climate change takes precedence over all of the other issues for Xu, he said, because the other issues are “downstream of having a healthy and habitable planet.” With people losing their jobs and, as a result, health insurance due to the pandemic, he said Medicaid expansion is also a priority.

Xu said he considers himself lucky that both his personal politics and personal philosophy match up well with a majority of his constituents.

“I have never taken a single vote in my two years where I felt like I had to really sell it to my constituents,” Xu said. “Everything that I’ve done, I’ve felt completely comfortable that this is what my constituents really wanted.”

Additionally, Xu said his experience as a Democrat who unseated a popular Republican incumbent reflects bigger changes in Johnson County more broadly. Xu said he is surprised to be unopposed in 2020, but also says his predecessor Rooker was the best Republican candidate for the district — and no other Republican, in his opinion, would have fared better this year with President Trump at the top of the ticket.

“I’ve gone from winning [in 2018] by 121 votes to going uncontested in two years,” Xu said. “My area is pretty solidly blue at this point, and I think you’re just going to see that trend continue, especially if the Kansas Republican Party keeps being as extreme as it has been.”