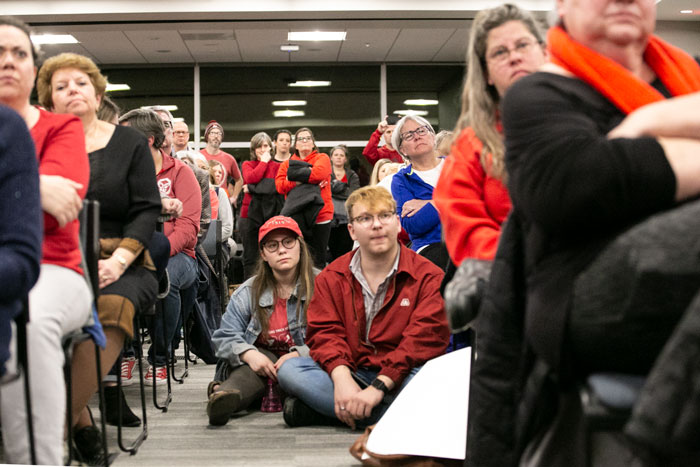 Teachers and supporters packed the SMSD board room in January amid tense contract negotiations. File photo.

The Shawnee Mission School District will ask patrons to approve a property tax increase this January in order to pay for $264 million in bonds that, district leaders say, would fund a slate of major renovation projects while also helping alleviate teacher workload concerns.

Why it matters: District leaders say that by using revenue raised with new bonds for major building projects, they would be able to reallocate money for other expenses to allow for the hiring of dozens of additional secondary teachers.

That’s seen as key to lessening the workload of current middle and high school teachers, who have chafed at having to teach more daily periods than their peers in other Johnson County districts.

To make those new personnel expenditures possible, Superintendent Mike Fulton has suggested moving $4.5 million in custodial/maintenance expenses out of the district’s operating budget — where teacher salaries are drawn from — and into its capital outlay budget over the next two years. The move is permitted under Kansas law, but would require the injection of additional funding into the capital outlay pool that could only be generated from local property taxes.

“We can’t do that unless we pass a bond issue,” Fulton said at Monday’s Board of Education meeting.

The details: To fund the bonds, the district will ask voters to approve a property tax increase that would raise the district’s local property tax rate from its current 52.115 mills to 52.823 mills. For the average homeowner, that would mean roughly an additional $8 of property taxes per year on every $100,000 of assessed value.

Among other things, bond funds would also be earmarked for:

The bigger picture: This will be the first bond issue put before SMSD voters since patrons overwhelmingly approved a bond measure in 2015. That raised more than $230 million which went towards building six new elementary schools, installing districtwide security upgrades and constructing the district’s new aquatic center, among other things.

What was said: SM South Area Board Member Jessica Hembree expressed concern that the issue of teacher workload may not be clearly linked to the proposed bond measure in voters’ minds:

Hembree joined her colleagues on the board in voting unanimously to put the bond issue before voters in a special mail-in election in January.