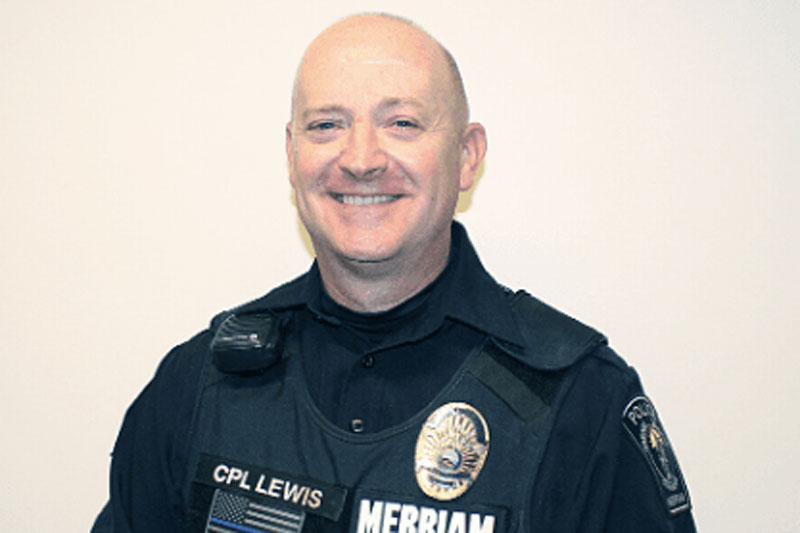 Phil Lewis, above, is back at the Merriam Police Department after a nearly two-year battle with colon cancer. Photo via city of Merriam.

He’s been back at the station for a few weeks now, which has made him feel “as if I was never gone,” Lewis said.

He has returned in the midst of the COVID-19 pandemic, and admits there was some concern about possibly being exposed to the disease — but getting back to work, he says, was always the plan.

“Even after I got my treatment, there was never a question about whether or not I wanted to come back,” Lewis said. “I love my job, and of course I would [return].”

A long road to recovery

He learned of his diagnosis in January, 2019, when he went to the doctor after not feeling well. Once the doctors were able to determine what was going on, Lewis said it was evident the cancer was advanced.

After becoming ill due to surgical complications, he spent months trying to recover in order to be healthy enough to handle chemotherapy treatment. Lewis had several stays in the hospital, including one month-long stay in which he said he struggled with having to rely on someone else to do almost everything.

Lewis said his wife pushed him to continue to move forward and get up on his feet everyday. Additionally, he said he received an abundance of support not only from his colleagues and other law enforcement agencies but also from residents.

Lewis said he feels for those who are going through what he experienced who may not have the support he did.

“I am lucky to be in a profession that is so motivated to help others,” Lewis said. “The amount of support from the Merriam Police Department and all kinds of other law enforcement agencies has been overwhelming.”