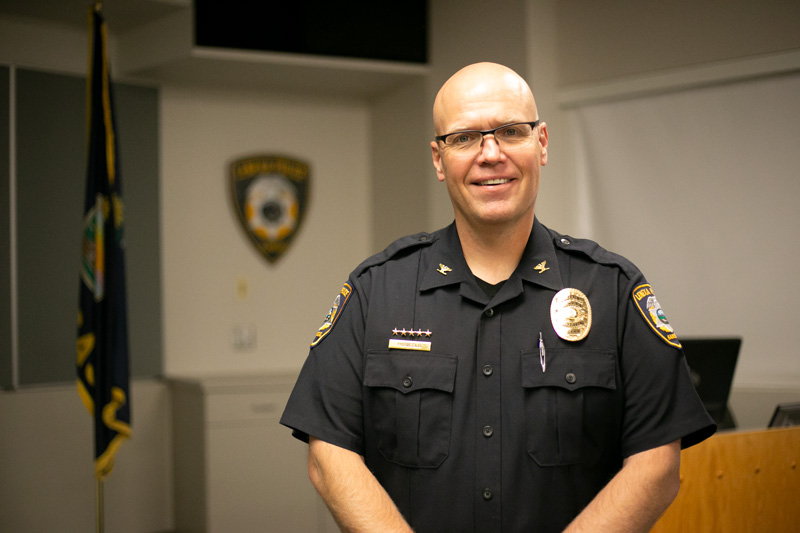 Lenexa Police Chief Tom Hongslo is retiring in December after a 31-year career in law enforcement. He is grateful for the community's support and for his time working with his fellow officers and their families.

The city of Lenexa announced Hongslo’s upcoming retirement last month. Details about recruitment of the next police chief have not yet been released.

“Got a little anxiety; it’s just a big change,” Hongslo said. “I’ve been doing this for 31 years. To think that on Dec. 19, I’ll no longer be a police officer and be part of this organization again, it’ll be sad.

A quarter century in Lenexa

Hongslo recently marked his 25th year with the Lenexa Police Department. He has been chief for the past eight years and just received the Kansas City Metropolitan Crime Commission’s Clarence M. Kelley Award for excellence as a law enforcement executive in the Kansas City metro area.

“Chief Tom Hongslo is a dedicated public servant who cares deeply about his department, the City organization and the community we serve,” said Beccy Yocham, city manager of Lenexa. “His accomplishments and the impacts of his leadership will be felt for years to come. This community owes him a debt of gratitude for his decades of outstanding service.”

“We have to do something; we’re completely out of room at that police department,” he said. “Hopefully, when they say, ‘OK it’s time to go,’ then we can get in the design phase and get going.”

Prior to his time in Lenexa, Hongslo was a deputy for the Platte County Sheriff’s Office in Missouri and, later, an officer with the Mission, Kansas, Police Department.

Here are some examples of specific changes made under Hongslo:

“Something about Lenexa is we’re not afraid to be the first,” Hongslo said. “So body cameras, license plate readers, drones, we’ll say, ‘Hey, we see the benefit of this, we’ll go do it. We’re not going to wait for someone else to do it.’”

‘There’s a middle road on everything’

Hongslo’s retirement also comes at a time of increased scrutiny and criticism of law enforcement, as the deaths of George Floyd, Breonna Taylor and other Black people at the hands of police have sparked an ongoing national movement for racial justice and police accountability.

Hongslo was one of the first police chiefs in Johnson County to make a statement condemning the ex-Minneapolis police officer’s tactic of kneeling on Floyd’s neck, killing him. In response to a new stream of questions on Lenexa’s policing, his department posted responses on its website.

“It’s disheartening,” Hongslo said. “The most disheartening part of it, if an event happens anywhere in the United States, they put all police officers in the same bucket, and that’s not fair. You can’t evaluate an officer in Lenexa by something that someone in Los Angeles did. We take great strides to make sure that we are hiring very ethical, moral police officers with high values.”

He remembers similar movements in his career — following riots in 1992 in Los Angeles after the acquittal of Rodney King’s attackers, plus the fallout from the acquittal of the police officer who killed Michael Brown in Ferguson, Mo., in 2014. But he also says positive changes came to law enforcement following those incidents.

“There’s a stir, people want information, and every time that this has happened, police evolved  a little bit, our communities evolved a little bit, for the better,” Hongslo said. “I think that’ll happen this time too. There’s a middle road on everything, and it’s tough to get there sometimes when people are on the far left, far right, and no one wants to talk about the middle road. But we’ll get there.”

Hongslo said he’s “fortunate and blessed” to work for the Lenexa Police Department. He particularly credits the families of his officers for their dedication.

“I’ve been lucky to be surrounded by great people, made my job pretty easy most of the time,” he said. “We have the same philosophy: our job is to make sure that our police officers are the best that they can be, that they keep this community safe. Sometimes we’ll walk a fine line to make sure we get that done, and we’re not afraid to take chances.

“And it’s a great community work for. They support us, and if there’s ever a tragic incident in Lenexa, they trust us. We’re very legitimate in the eyes of this community, and we greatly appreciate that.”

As for next steps after retirement, Hongslo doesn’t know.

“You can attach my resume,” he joked.

He lives in Lenexa with his wife of 26 years, Brenda Hongslo. They have twin adult sons.