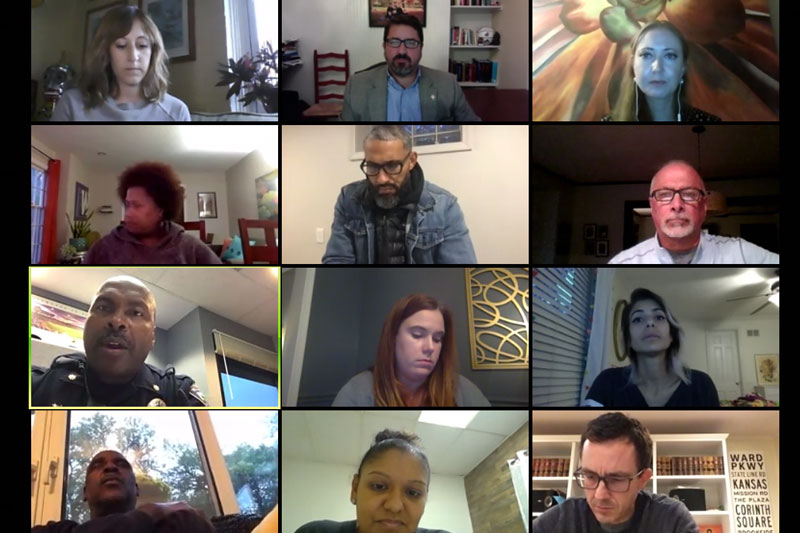 The city of Prairie Village’s diversity task force Tuesday evening met for the second time to continue its brainstorming session from September, including discussions about erasing racially discriminatory deed restrictions and implicit bias within the police department.

Mayor Eric Mikkelson spearheaded the diversity task force, which is charged with developing recommendations to the city council on ways to diversify Prairie Village — specifically to racially diversify the city at this time, though it does include diversification of sexual orientations and socio-economic incomes, as well.

Following the September meeting, Mikkelson said he’d received feedback — overwhelmingly positive and constructive feedback, that is — and addressed three “good faith suggestions:” the amount of white people on the task force, the fact that it’s being led by a straight, white male and the balance of being action-oriented and listening to the community.

Mikkelson suggested the task force stay on track as is and plan for at least one additional meeting to refine recommendations and ideas, and consider making the task force a more permanent entity. Additionally, Mikkelson appointed a 12th member to the task force, Trudy Williams, a Black woman, and said following the third meeting, he would gladly step down from leading the meetings.

‘Racial undertones that are 70 and 80 years old’

After the first meeting, task force member and Councilmember Inga Selders researched racially discriminatory deed restrictions within city limits and found 18 declarations of restrictions that make reference to the covenants — which were filed by developer J.C. Nichols. Selders said per her research, she found the documents with restrictions exist only within the Prairie Village Homes Association, a map of which can be found online here.

Selders said she doesn’t believe the city can move “past this chapter” in its history unless the association is dissolved, and if neighbors are interested, they could form a new neighborhood association. Mikkelson asked if the dissolution of the association is necessary, and said he wondered if there were a way to get the same outcome without potential resistance and opposition from a robust, active homes association.

Task force member Todd Harris, in response to Mikkelson, asked if dissolving a home association and restarting another one “is that big of a deal.” Harris said if the task force asks the association if they want to be known as “the stewards of racial covenants,” they’d likely say no.

“We’re talking about racial undertones that are 70 and 80 years old here, that are casting a cloud on this community as a place that’s not friendly to Black and brown people,” Harris said “If a homes association is more important than starting a fresh, than I would question the relevance of the homes association.”

Julie Brewer, executive director of the United Community Services of Johnson County, said the 2007 state statute — that requires the removal of certain restrictive covenants, including racial covenants — is that it was written so that a homeowners association vote was not necessary so long as the HOA is still viable and active. The city could potentially give the HOA a 30-day notice to remove the racially restrictive covenants, she said.

Selders is going to continue to refine the way in which the city can move forward with removing the covenants. Dennis Solis, a task force member, said he’d lean toward whatever method is necessary to strike the language completely.

“It’s a little bit like a baby step for Prairie Village,” Solis said. “This is more symbolic, right, it doesn’t change a whole lot, but I’m imaging more people to say, ‘Yeah, we don’t agree with that now.’ It kind of becomes an easy win if we can figure out how to do it… obviously the systemic nature of things call for a lot more than that.”

As the group continued its brainstorming sessions beyond deed restrictions — including discussion about the city hiring a full-time diversity, equity and inclusion officer and decriminalizing marijuana — the task force veered into a conversation about implicit bias within the Prairie Village Police Department.

Melissa Brown, a task force member who is also on the city’s planning commission, described an experience in which she was at city hall on court day (pre-pandemic) and found herself uncomfortable as a white woman seeing a majority of the court attendees being people of color. Solis, who lives on 75th Street and Mission Road, said when he and his wife see someone pulled over in the city, a majority of the time it’s a person of color.

“I had the exact same experience [as Brown]… in Mission,” Solis said. “I’ve lived here for 30 years and the truth is, my wife and I would say, ‘How much you want to bet that when we’re driving down the street, the person pulled over is a person of color?”

Several other task force members said they shared similar experiences to Brown and Solis. Selders said she had police departments county-wide pull racial demographics for marijuana-related arrests, and that “there’s implicit bias going on in every single community in Johnson County.”

Mikkelson said while the city is 95% to 97% white, “traffic in Prairie Village is much more diverse than our residents — we know that to be true.” He said the court day perception may have something to do with socio-economic status, such as a person getting pulled over for expired tags due to not being able to pay for them.

Major Byron Roberson said 75th Street and Mission Road is a high-traffic area, so although the public may see a person of color being pulled over on those streets, they don’t always see others being pulled over in neighborhoods. Socio-economic status plays into who gets pulled over, he said, as Missouri drivers have a different set of rules for tag renewal and may not be able to afford it, which may lead to a traffic stop.

Additionally, Roberson said the department believes the way to stop bad people who are coming to the city to do bad things can only be done via traffic stops.

“We are out there trying to do the right thing, trying to make traffic stops and keep our community safe — we can’t do that by not stopping anyone, it’s not possible,” Roberson said. “We can do that by keeping track of, managing, educating and doing the things that we’re doing. That’s what I think that this group needs to stay focused on.”