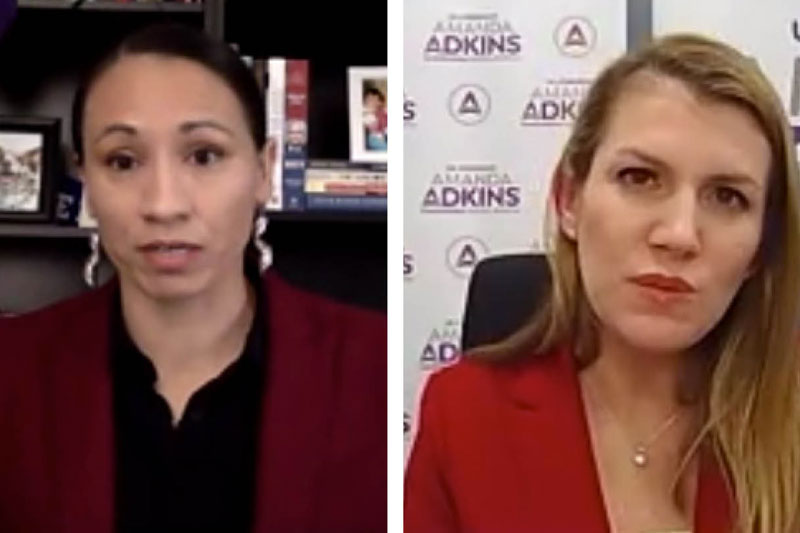 Adkins blasted Davids for her allegiance to U.S. House Speaker Nancy Pelosi, while Davids vilified her opponent as an extension of former Gov. Sam Brownback.

Brownback appointed Adkins as chairwoman of the Kansas Children’s Cabinet, which dispenses money from the federal tobacco settlement, after she served as his adviser. She is an executive at Cerner, a health care technology company based in Kansas City, Mo.

Voters in the Kansas City district have a choice, Davids said, between “somebody who supports dismantling the Affordable Care Act and protections for people with pre-existing conditions, and for someone who’s going to fight every single day to keep those protections in place and make health care more affordable. You deserve a representative that’s going to stand up for your values, for our community’s values, and not someone who’s trying to resurrect Sam Brownback’s agenda.”

Adkins said Davids has voted with Pelosi 97% of the time since arriving in the U.S. House two years ago, which signals to voters “where her loyalty and allegiance is.” The GOP candidate said she will celebrate her 21st wedding anniversary Friday and doesn’t agree with her husband as often as Davids agrees with Pelosi.

Adkins said she doesn’t believe in government-run health care but promised to “stand up and protect people with pre-existing conditions” if the Affordable Care Act is dismantled.

Davids said she opposes government health care for all but supports the expansion of Medicaid, a component of the ACA that would provide health care coverage to an estimated 130,000 low-income Kansas adults and their children.

“Right now, in the midst of a global pandemic, folks are scared for their health and well-being and that of their families and loved ones,” Davids said. “It’s really important that people have access to quality, affordable health care.”

She called for liability protections for businesses and a payroll tax holiday.

“A major distinction between Miss Davids and myself is to keep more of the profits, the hard-earned money that (businesses) are earning, to be able to invest in this time period and hire more people. It’s just critical,” Adkins said.

Davids said she was “thrown off” by Adkins’ assessment of unemployment aid and pointed to the “devastating impact” the pandemic has had on job losses.

“Getting folks the relief that they need right now when people are feeling that anxiety that you get when you don’t know if you’re going to be able to pay your bills and put food on the table — unemployment relief is really important for that,” Davids said.

The virtual debate was hosted by the NAACP Olathe, Overland Park and Leawood Branch, with the help of the Olathe Latino Coalition and the Johnson County Latina Leadership Network. Moderators asked the candidates to explain their views on equity and inclusion, and the relationship between community and police.

Adkins said it was important to value both police and the Black community, and noted that she has signed a pledge to oppose any bill that would “defund the police.”

“People do value safety,” she said.

Adkins also said attention should be given to the high mortality rate for Black women in childbirth.

“If we really care deeply about thriving Black families in the Kansas City region, then first, we need to start with women,” Adkins said.

Davids, who is LGBT and Native American, said it was important to send a candidate to D.C. who would represent all of the Kansas City community.

“We know that our country is going through what has been really difficult and long overdue conversation about racial equality in this country,” Davids said.

Davids said she has had conversations with law enforcement and community members about how to improve trust.

“A couple of things that popped out right as soon as I started having those conversations: transparency and accountability, and making sure that our police officers are not saddled with things that really shouldn’t be part of their mission, like mental health crisis or substance abuse issues,” Davids said.