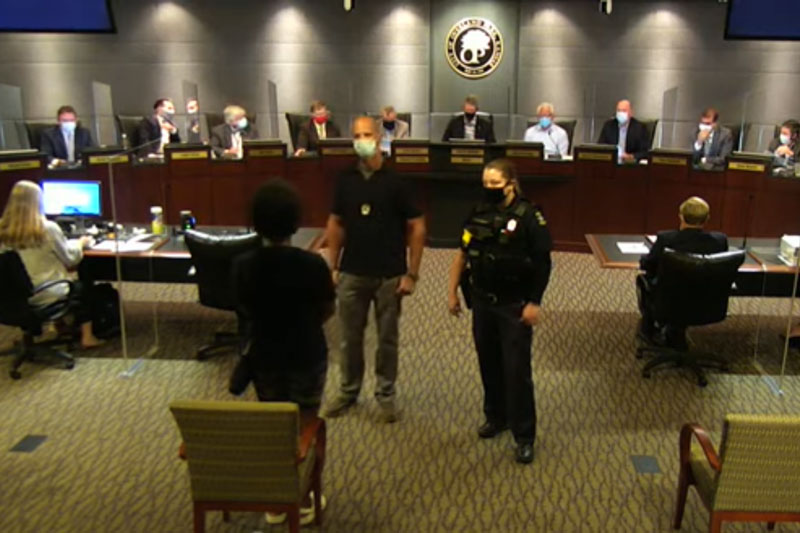 Overland Park's Finance, Administration and Economic Development committee considered a rule change that would turn off cameras during the public comment. Above, law enforcement responds to an attendee at an August Overland Park City Council meeting who repeatedly spoke over proceedings. Screenshot via Overland Park YouTube channel.

The cameras can stay on for now during the open mic time at Overland Park City Council meetings, but early next year the council may require speakers to sign up in advance.

The council’s Finance, Administration and Economic Development committee revisited the rules for the public comment sessions and decided to actively pursue the advance sign-up in a resolution that would be considered by the council near the end of this year.

Whether to have public comments and what rules to impose on speakers has been a long-running discussion among Overland Park council members. Some members worried that speakers would be uncivil or possibly blurt out slanderous comments. They wrote a code of conduct for speakers requiring civility and outlawing advertising, profanity, personal attacks and disclosure of private information of others.

Councilor Fred Spears proposed turning cameras off after an August meeting that was repeatedly disrupted by people who objected to the arrest of protesters at a July march and to the lack of a public comment period to discuss it. However some of the same people returned the next meeting and with one exception stayed generally within the rules.

Since then the public comment period has been without drama, and speakers have not come close to using up all of the allotted 30 minutes. Given that, committee members said they’d adopt the more measured approach.

The sign-up was the only one of several rule changes discussed a month ago that the committee members are going ahead with. A controversial idea to turn off cameras during the comments will not be included in the amendment the city staff is writing up. Turning off the cameras would have kept the comments out of the live stream and recorded archives.

Spears said the committee can continue to look at how things are going in coming months.

“I brought up three suggestions,” a month ago, he said. “This is the only one I think we really need to look at at this point.”

Councilor Logan Heley said the council should wait until the end of the year to make changes, when there have been more council meetings with public comments.

“We’ve already seen a public backlash from even bringing it up at the last meeting,” he said.

The sign up rules now being considered would allow speakers to sign up for one three-minute spot during the 30-minute comment period each meeting. Registration would open when the agenda is published — often the Friday before — and would be accepted until 3 p.m. on the day of the meeting.

Speakers would be asked to give their name, address and topic and would speak in the order their registration is received. The mayor would have discretion whether to allow comments from someone who did not register, if there is enough time.

If there are too many speakers during the 30 minutes, those left out would be scheduled to be first at the next council meeting. Speaking at committee meetings is at the discretion of the chairman.

The open mic time rules do not apply to the public hearings that are held on specific topics, like rezoning.