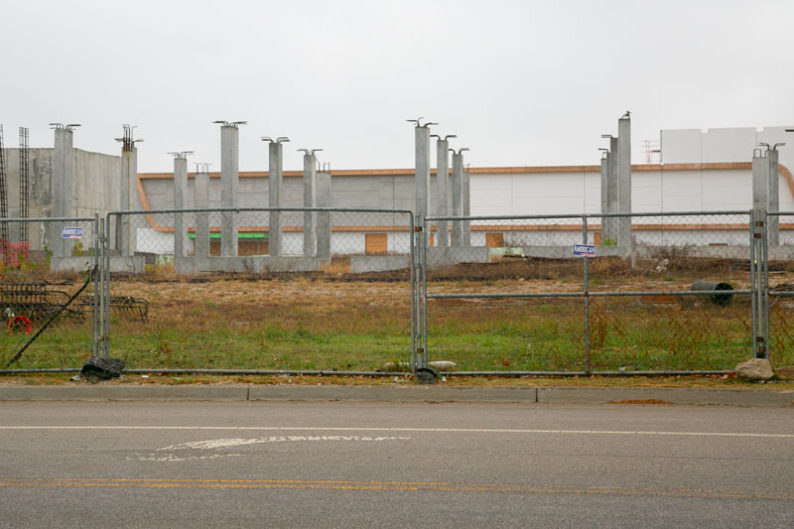 Mission Gateway, at Johnson Drive and Roe Avenue, will not resume construction as developer Tom Valenti says the coronavirus pandemic has brought on economic challenges.

Mission Gateway developer Tom Valenti said construction of the much-anticipated project on the site of the old Mission Center Mall near Johnson Dr. and Roe Ave., will remain on hold for the foreseeable future due to economic impacts brought on by the coronavirus pandemic.

Valenti provided the Mission City Council with an update on the project Wednesday evening, and said as a result of the pandemic, lenders and the bond market — two of the main funding sources for the Gateway project — are skeptical to do deals with projects that have hotels as large components.

Still, Valenti said he, Cameron Group LLC and his partner do not intend to give up on the site and “are going to complete” Gateway.

“I want you to know that we are beyond 100% committed to this project,” Valenti said. “We are confident that we are going to bring this to completion, we’ve just got to get through this period.”

Major tenants still on board

Construction at Gateway came to a halt in late March due to concerns about social distancing amid COVID-19, and was anticipated to resume once local economic shutdowns began to lift. By June, however, developers announced the same finances currently posing concerns were not in place in order for work to pick back up.

Valenti said entertainment company Cinergy, the largest Gateway tenant in terms of square footage, is still on board with the project, as is celebrity chef Tom Colicchio. The hotel and movie theatre components of the project pose the largest concerns for lenders and the bond market, Valenti said.

He said, so far, they have been unsuccessful finding tenants for an office building that is part of the development.

Councilmember Sollie Flora asked if there was any timeframe in which the construction might resume, and Valenti said it would be irresponsible for him to make a guess at this point.

“It would be really just a guess,” Valenti said. “I have no idea, I just don’t know. I think so much of it depends on when the [COVID-19] vaccine is proven to be effective and when people start to feel comfortable. As I said earlier, we’ve got to get people in the mezzanine [lending] market and people in the bond market comfortable with Cinergy as a movie theater and the hotel.”

Councilmember Nick Schlossmacher asked if Valenti could speak to the reports of at least a dozen unpaid liens filed against the project since construction halted earlier this year. Valenti said the liens are on hold and will be paid off when construction resumes, though developers have “had great cooperation with the contractors.”

Schlossmacher also asked if there were any sort of contingency plans if one of the project’s components, such as Cinergy or the hotel, were to fall through. Valenti said there are plans in place, but that he’d rather not speak on what those are at this time.

The Mission Center Mall, which formerly occupied the site, closed 15 years ago. Prior to the pandemic, the Mission Gateway development was set to launch with the opening of Cinergy alone in summer 2020.