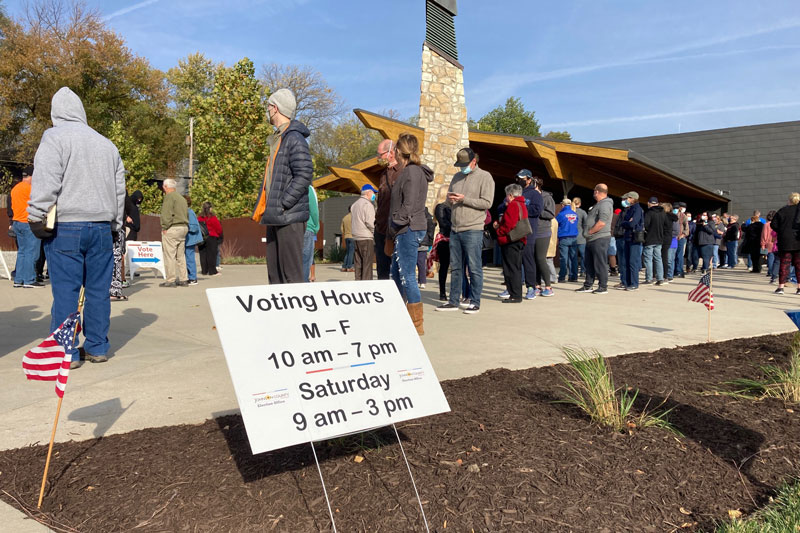 Johnson County saw a 12% growth in voter registration since October 2016. Much of that growth comes from voters who registered with the Democratic Party, with a 41% increase in the number of voters registered as Democrats compared with October 2016. File photo.

The population of registered Democrats in Johnson County has grown notably since October 2016.

Johnson County has seen significant growth in the number of registered voters compared with the last presidential election cycle, with a bulk of that increase coming from residents who registered with the Democratic Party.

Democrats now make up more than 30% of the total registered voters in the county after a 41% increase in the number of registered Democrats compared to October 2016.

Meanwhile, the Republican Party saw a roughly 6% gain in voters, a growth that holds more steady with Johnson County’s population increase. In October 2016, Republicans made up 46% of the total voter population in the county. Today, they make up 43% of voters in Johnson County.

The Johnson County Election Office reported that 443,106 residents are registered to vote in the county — a 12% increase from October 2016. In the last month alone, the county gained 9,000 new voters. Most month-to-month increases this year ranged in the 1,000s or 2,000s.

And here are those numbers for October 2020:

While any number of factors could play a role in the loss of independent voters, Miller attributes this decrease to predominantly one cause: Access to the primaries. In Kansas, primary elections are closed to unaffiliated voters who would have to register with a political party if they wanted to cast a ballot back in August.

“It’s really these transitional communities like Johnson County, like a lot of our suburban communities around the country, where the increase in independents that you would normally expect from young people, isn’t necessarily seeing any registration numbers,” Miller said.

Voter registration numbers aren’t always telling of how people will actually vote. Political scientists like Miller find in their studies that some voters may have registered with one political party years ago but end up transitioning to favor a different political party. Plus, the voter registration data from the Johnson County Election Office doesn’t differentiate between new voters and voters who have changed political parties.

And Johnson County is certainly transitioning. More telling than any party registration numbers is how voters behave at the polls. Even with Johnson County’s predominantly Republican voter population, Johnson Countians mostly favored Democratic candidates in statehouse, gubernatorial and Congressional races in 2018.

“Johnson County is a blueing county,” Miller added. “It was solid red not too long ago. It is at least purple now, and it may be transitioning over to a light shade of blue.”

Ultimately, the best indicator for Johnson County’s political affiliations lies in the future, after the ballots are counted on Election Day.