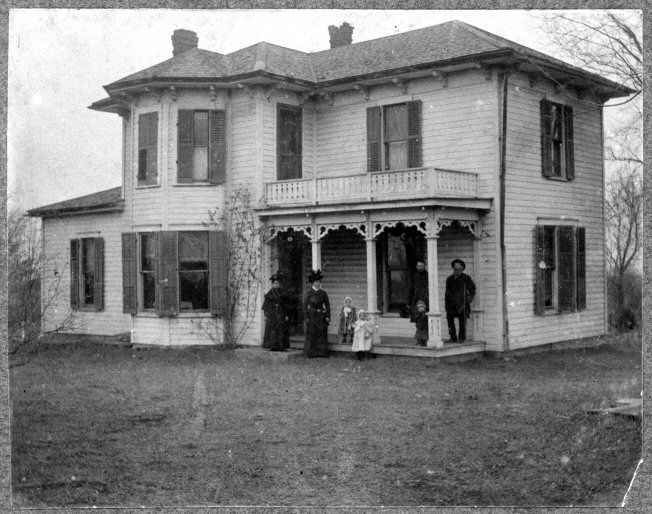 The Dille family was one of the first families to arrive in Johnson County’s McCamish Township, settling in 1857 near a small, anti-slavery town named Lanesfield.

Common Threads, the Johnson County Museum’s newest temporary exhibit, will be unveiled on Nov. 7. The exhibit highlights the museum’s historic quilt collection and the stories of families who made them. Combined, these quilts patch together a unique history of our community. What types of histories can a quilt reveal? We’ve briefly highlighted three of the stories you will find in the Common Threads exhibit below. To learn more community history, make plans to visit this vibrant and engaging exhibition starting on Nov. 7th.

The Dille Family Quilt: Piecing Together the Early Settlers’ Story

For the first century after its founding in 1855, Johnson County was predominately an agricultural, rural landscape. The Dille family was one of the first families to arrive in Johnson County’s McCamish Township, settling in 1857 near a small, anti-slavery town named Lanesfield. Like hundreds of other families, the Dilles lived a hard life in Kansas Territory that was made even harder by the Border War. The Dille family found prosperity farming crops, raising animals, and eventually running a small dairy and breeding horses. The entire Dille family helped on the farm. In addition to their farming duties, Mrs. Margaret Dille took care of the children and home site. Clark Leander Dille was involved in early county politics, serving as a county commissioner and Kansas legislature for a time.

When the railroad was established through neighboring Edgerton and Gardner, the town of Lanesfield dissolved. The Dille family remained in what had been Lanesfield. They purchased the old townsite, adding 400 acres to their property.

In many ways, Margaret Dille’s Victorian Crazy Quilt represents early Johnson Countians’ way of life. The quilt was pieced together using scraps from various types of fabric. The patchwork is quilted to cotton feed sack backing, making something both beautiful and useful. Hand-painted flowers add a touch of beauty to a quilt designed to provide warmth in the cold Kansas winters.

The Ingalsbe-Orr Quilt: An American Story Through the Generations

Just as the bonds of family are woven through generations, so, too, is Johnson County’s history tied to national history. The Ingalsbe-Orr quilt represents at least three generations and connects one Johnson County family all the way back to the first generation born after the American Revolution.

Elizabeth “Betsy” Inglasbe Thomas (born 1788) began the Ingalsbe-Orr quilt when she was a young woman living in Massachusetts and, later, Indiana. Her son, Steven G. Thomas, brought the quilt with him to Kansas, and passed it on to his daughter, Jessie Thomas, who lived in Olathe.

Jessie Thomas went on to become an important force for Johnson County. After teaching for a time, she earned her medical degree from Woman’s Medical College at Northwestern University in Chicago. She opened a practice in Olathe, traveling to her patients’ houses as a “horse and buggy” doctor. When she married in 1905, Dr. Thomas made a deal with her husband, Edwin Orr, to keep her profession as a community doctor (women at the time typically gave up any careers they had started in order to become a housewife). He agreed, and Dr. Thomas—now Dr. Orr—continued serving her community for the next 20 years.

As she aged, Dr. Orr spent her little leisure time reading and quilting. At some point, Dr. Orr added to the quilt her grandmother had started at least a century before. Dr. Orr died in 1936, leaving a legacy of community medicine and this beautiful multi-generational quilt.

The Ensors: Innovation in Johnson County

The Ensor family, like the Dilles, were a farming family. The Ensors bought a farm in Olathe in 1909 and lived there for the next 80 years. Their property differed from all the other Johnson County farms in one incredible way: it was home to two nearly 100-feet tall metal radio towers. The Ensors erected the towers on their property in the 1920s to support antennas for their children’s amateur radio stations.

Amateur radios called “ham” radios, first appeared in the early 20th century. The Ensor children, Marshall and Loretta, each took an interest in radio communication. In 1913, at age 14, Marshall built his first radio set. He and his sister Loretta studied Morse Code, and by 1916, both Ensor children were making contact with people living nearly 20 miles away.

Over their radio careers, the Ensors were recognized for their achievements helping others to learn radio by radio. Marshall was given the CBS Radio Paley Award in 1940, and Loretta won honored in 1974 by the Young Ladies Radio League for her 50 years as a ham radio operator. Marshall died in 1970. Loretta continued operating the family radio station until her own death in 1991. Today one of the radio towers still stands at the Ensor Park and Museum, their home turned into a museum site to honor their passion for radio. Both Loretta and her mother were avid quilters, and this Victorian Crazy Quilt shows a slightly elevated social status, containing rich materials, stitching, and extensive hand-painted designs.

In addition to the three stories highlighted here, Common Threads explores eight other great county histories in an exhibit that also features more than a dozen historic patchwork quilts showcased around the borders of this fascinating new exhibit. Common Threads will be on exhibit Nov. 7 through Jan. 23,  and is included in the price of museum admission ($6 adults, $5 seniors, $4 children, and free for museum members). Complementary programming for the exhibit will launch on Nov. 12 at 6 pm with a virtual program featuring well-known Kansas quilt historian Barbara Brackman. The program is free, but registration is required to receive the program link via email the day of the program. To register, call (913) 831-3359. A program with quilter and activist, Nedra Bonds, is planned for January 2021. More details will be available on the museum’s social media: @JoCoMuseum/#JoCoHistory.