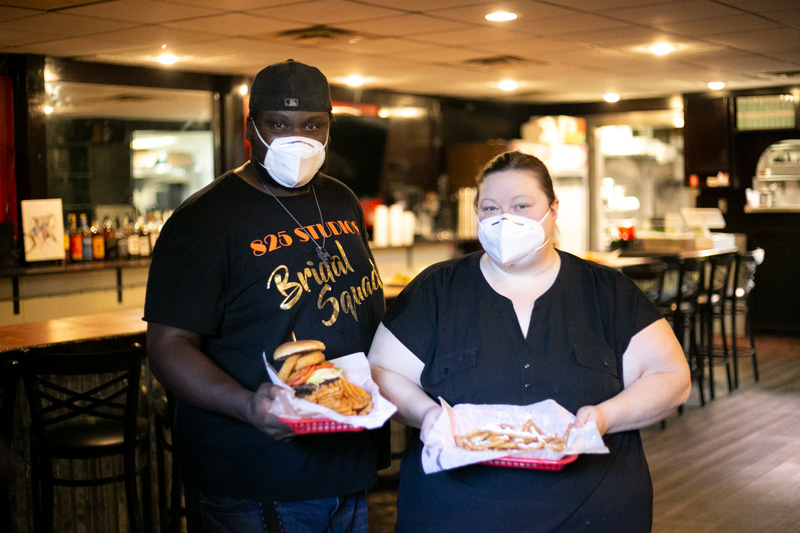 Harley’s Hideaway, a new bar and grill, has opened a few blocks away from downtown Shawnee.

Located at 12200 Johnson Drive just west of Quivira Road, the new restaurant was the former site of Game Changers Sports Bar, and Margarita’s.

Jessica Christman and Hulon E. Crayton II, owners and managers of the new restaurant, said they’ve already had a full house a couple of nights. The restaurant had a soft opening Oct. 8.

“We’ve gotten a lot of neighborhood people just popping in to check us out, see what we’re about, what we have going on,” Christman said. “I think it’s cool, because that’s our whole concept was to be a neighborhood bar, a go-to place to be able to get live entertainment and have a good time. I feel like we’ve been pretty well received for being in the middle of a pandemic.”

While Harley’s Hideaway has focused mostly on takeout orders and curbside pickup due to the COVID-19 pandemic, the restaurant is preparing for its weeklong grand opening celebration next week.

The restaurant has some shows and events with Kansas City natives lined up in the coming days, starting with a comedy show Oct. 28 featuring Aaron Scarbrough and Joe Nunnink. Jillian Riscoe is performing at the restaurant’s first concert Oct. 30. The restaurant plans to have weekly comedy shows on Wednesdays and live music on Fridays.

Leading the kitchens is Rico Nelson, a Jamaican chef and culinary artist who ran his own food truck, Rico’s Island Delight BBQ, in Leavenworth. The owners said Nelson will introduce a fusion of Caribbean flavors and Cajun seasonings as well as a few key recipes for jerk chicken and ribs. Crayton is also pulling from his culinary experiences on the West Coast and in the southern states to inspire the menu of burgers, fried and grilled chicken dishes, and seafood entrees.

Opening a restaurant in the middle of a pandemic presented a challenge for the owners who has plans for a “total makeover” of the space, including an outdoor patio. They’ve instead opted to focus on bringing in talent for live shows.

“We technically could have opened three-plus months ago,” Crayton said. “So we’re a little frustrated, not at what’s going on as much as we are about ourselves not having been very proactive and not having good direction.”

“We’ve had a lot of learning lessons in this process,” Christman added. “We’ve overcome a lot of challenges going through COVID, but we’re here and we hope to be able to be a staple within the community and within Kansas City.”

The owners said they hope to build upon the recent growth of food and drink options in downtown Shawnee.

“I absolutely think it will be mutually beneficial, us being a couple of blocks away from downtown allows for people that are now in Shawnee and exploring to come across our restaurant,” Christman said. “The spillover will benefit us long-term as they continue to grow the downtown area.”

The restaurant has health and safety precautions related to the COVID-19 virus, such as disinfecting measures, wearing gloves and masks, etc. They’re limiting capacity by spacing apart tables, and customers can access hand sanitizer and masks at the door if they don’t have one. Customers are asked to wear masks when not at their tables.

Tentative hours of operation are: