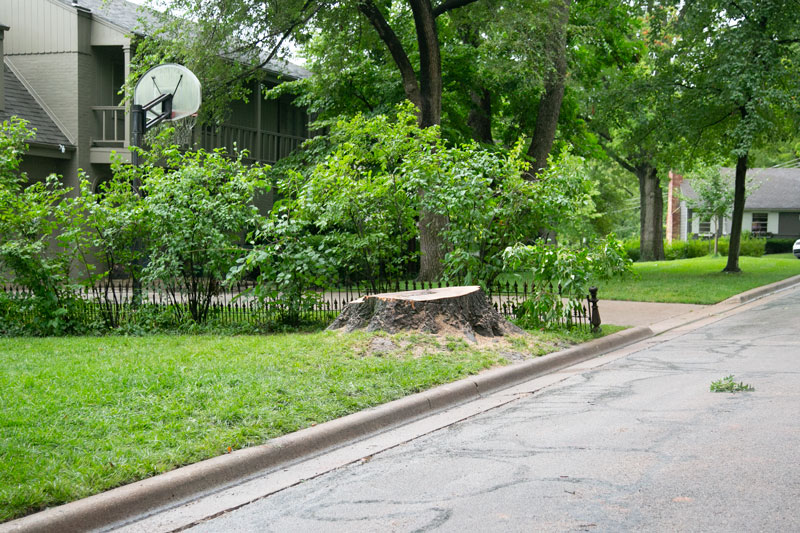 The Fairway City Council tree ordinance modification approval means city staff will now have the authority to execute a feature tree removal so long as the tree is dead, dying or dangerous. If a resident wishes to remove a tree for other purposes, it will need to go before the city council. Above, the stump of the feature tree removed on Suwanee Road. File photo.

The Fairway City Council last week approved modifications to its tree ordinance, which will no longer require a special city council meeting for a tree to be removed.

Why it matters: The ordinance as previously written required city staff to get council approval prior to removing a feature tree, which is defined as a tree with a trunk that is at least 30 inches in diameter. Under the modified ordinance, city staff can work with KC Arborist, the tree company the city has worked with for years, to determine whether a feature tree needs to be removed based on if it is dead, dying or dangerous.

When a tree in the right-of-way is removed because it is dead or dangerous, the city will cover the associated costs, according to city documents. If a homeowner wants to remove a feature tree for reasons other than death or danger, such as construction purposes, the city council will need to consider and approve the removal.

The homeowner will also need to pay into the city’s tree fund and pay for the removal costs.

Background: The city council gathered for a special meeting in July to determine whether or not a feature tree on Suwanee Road should be removed, as it had a large cavity about 20 feet off the ground. The homeowner contacted the city, concerned about debris that had fallen out of the tree, and KC Arborist determined it was structurally unsound and needed to be removed.

Still, a neighbor contacted the city the night before the tree’s removal because the neighbor had not been consulted. Public Works Director Bill Stogsdill said it was not the city’s practice to work with the neighbor on a tree’s removal, only the homeowner.

Key quote: “I want to be clear: We’re the city of trees,” Nogelmeier said during the July special city council meeting. “I think our staff has proven we are pretty diligent when it comes to the protection of our right-of-way trees. We’re one of the only cities that has this kind of ordinance in the metropolitan area.”