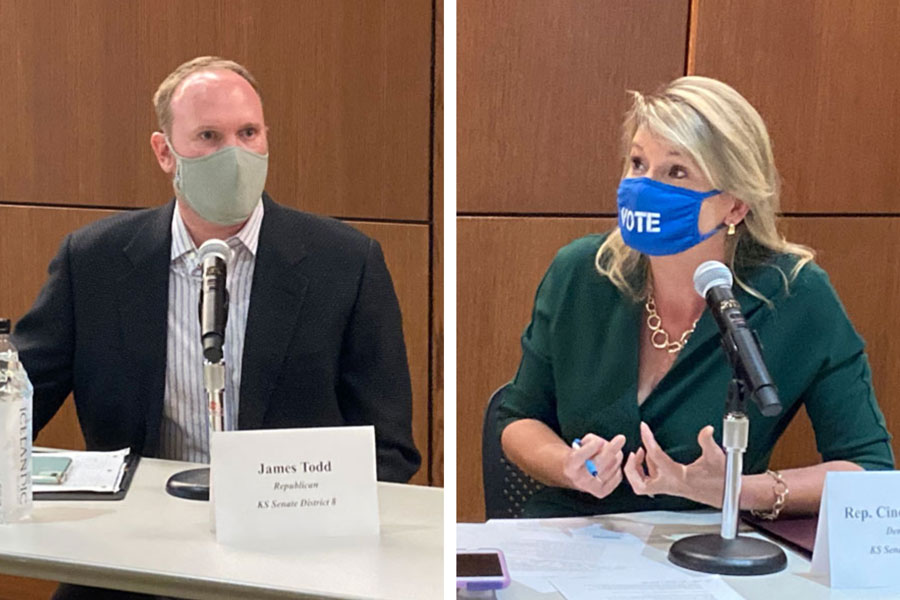 State spending, legislative policy for schools during COVID-19, and Medicaid expansion were among the discussed topics in the Post’s forum for candidates seeking office in Kansas’ 8th Senate District.

The two candidates, Democratic Rep. Cindy Holscher, who currently represents the 16th House District, and Republican James Todd are vying for the seat being vacated by current Senate Majority Leader Jim Denning. The pair answered a list of questions posed by the Post staff and readers on Oct. 8.

Below is a list of those questions with time stamps included for each question. A video of the forum is embedded below, and can also be found on the Post’s Facebook page here.

We have been starting all our forums off with a version of this question: with politics at the national level monopolizing much of voters’ attention, what do you think are Kansas’ biggest state-level priorities that need to be addressed? [6:00]

The COVID-19 pandemic is now entering its seventh month. In Johnson County, new cases continue to rise and the percent-positive rate also suggests that community spread is still occurring. How would you assess the state’s response so far? [10:40]

Another pandemic-related question more about economics, according to the state Department of Labor more than 103,000 Kansans remain without a job making the state unemployment rate slightly less than 7%. What policies will you support as a state senator to help businesses recover from the pandemic and get Kansans back to work? [15:00]

Amid COVID-19 and the potential increase in learning pods, private schooling and at-home schooling, has the pandemic in any way affected how you view the Legislature’s role in public school funding and policy? [20:05]

A question from a reader: The next state legislature in Topeka will be charged with drawing congressional and state legislative district boundaries following the 2020 census. Gov. Laura Kelly has already said she would veto any redistricting plans that she thinks gerrymanders districts, we should also say the state supreme court would have to sign off on any redistricting plan sent in by the legislature. But, it’s going to be an issue in the 2021 session. What is your opinion about how Kansas lawmakers should prepare for and approach the challenge of redistricting in 2021? [24:30]

This next question is a key one for many races both locally and on the federal level here in Kansas especially, because it’s a major topic of debate in Topeka. Do you support Medicaid expansion, why or why not? [29:10]

The next question is a reader question, this comes from reader Jim Redmond. Do you support raising income taxes in order to move state revenue and explain your decision on why or why not? [33:30]

This one has come up in other forums: abortion. A measure to put a proposed constitutional amendment related to abortion did fail to pass the Kansas House last session after being approved by the Kansas Senate. The measure sought to explicitly write out of the Kansas Constitution a right to abortion that was enshrined by a 2019 Kansas Supreme Court ruling. We should be clear it did not pass the house to be put before voters. If you are elected, it’s possible that you’ll be faced with a vote on a similar measure or at least abortion will come up. Do you think Kansans should be afforded a constitutional right to abortion? And what, if any limits, on abortion do you support? [38:35]