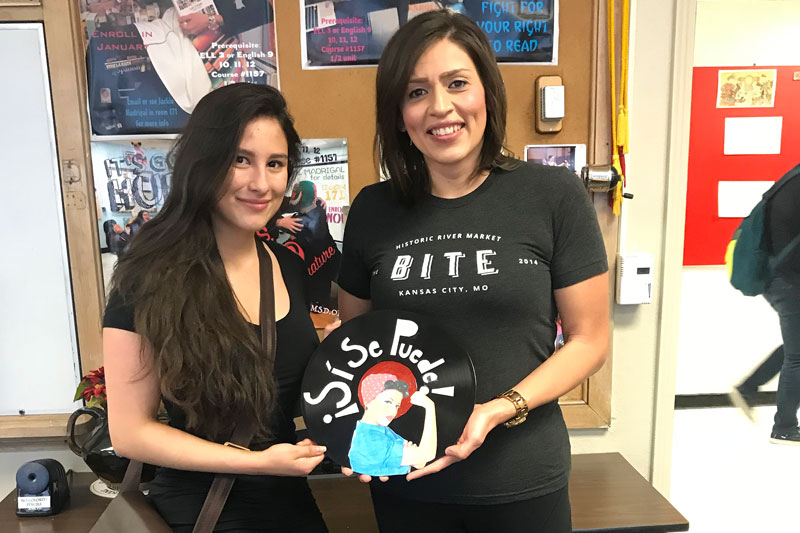 After five years, Jackie Madrigal (right), a Shawnee Mission North English Language Learners teacher, says she is ready to take her U.S. Latino literature class to the next level by working to get it approved for a language arts credit. Photo courtesy of Jackie Madrigal.

Five years ago, students stepped into Jackie Madrigal’s United States Latino literature class for the first time. Now, the Shawnee Mission North English Language Learners teacher is preparing for the next step: getting the course approved for a language arts credit.

Madrigal developed the class in 2013, and worked for years to get it approved by the SMSD Board of Education. As a Latina who struggled to connect with her schoolwork as a student, though, Madrigal said she’s always known she wanted to get U.S. Latino literature into the hands of her students — whether they’re Latino themselves or not.

“Everyone gets value from reading and learning these stories, the problem is when you erase that history or you don’t even present it, it becomes totally absent,” Madrigal said. “This is why we struggle so much, I believe, as people of color because our voice isn’t even there — it’s never considered.”

Books are at the center of the U.S. Latino literature course, and the reason Madrigal embarked on this journey in the first place. She said no matter what’s going on in the world, books are a constant source of escape and an outlet she’s used time and time again.

Madrigal sought grant funding from the Shawnee Mission Education Foundation, the Hispanic Development Fund and the Latino Giving Circle to purchase books for the class but wanted to go beyond the classroom. So, she decided to create a U.S. Latino literature library — available to students, faculty and staff throughout the Shawnee Mission district — with a stock of more than 600 books either written by Latino authors or focused on stories about Latinos.

Dubbed the Latinx Literature Library, teachers, students and faculty who wish to check out a book can fill out a Google form online. If the request is outside SM North, Madrigal puts the requested books into inter-campus envelopes and sends them off.

But she said she’s been getting creative with students who want books, and will personally deliver their book if need be.

“I’ll find a way to get books into kids’ hands because I know how important it is, especially when you’re going through these traumatic moments,” Madrigal said.

What Madrigal offers students — and their takeaways

Madrigal’s number one priority for students is to learn, and to show Latino students in particular a healthy reflection of themselves. Some Latino students aren’t sure what being Latino means, she said, and others who might be more connected to the culture might not know the history or stories behind their identity.

Now, her Latino students are getting what Madrigal says she didn’t have when she was younger: their history inside the classroom.

Though her students haven’t physically been in school yet this year because of the COVID-19 pandemic, her classroom is intentionally set up for students to “feel like [they’ve] come home,” she said. And it’s not just Latino students she’s doing it for, but students of all backgrounds.

Madrigal said when her students go out into the world, they’ll be able to understand Latino culture and not have a blanketed, stereotypical perspective. Former student and 2018 SM North graduate Adriana Cervantes said Madrigal’s U.S. Latino Lit class not only prepared her for college, but gave her the knowledge to educate others about her own culture.

“I’m very educated about my background, and whenever we talk about what’s Chicano, what’s Latino, what’s Hispanic, I can clearly go and talk to people and even explain to them and teach them exactly what each is,” Cervantes said.

Jose Murillo, a 2016 SM North graduate who was in the first-ever U.S. Latino literature course that Madrigal offered, said the class opened his eyes to the deep struggles of Latinos and how far they’ve often come in the U.S. He said Madrigal’s energy makes students fall in love with the content, and while he liked to see non-Latinos wanting to learn more about the culture, he said he thinks it’s important for Latino students to know more about themselves, too.

“My fellow brothers and sisters, I guess, should be in that class to learn where they come from a little bit more and open their eyes to a bigger picture of things,” Murillo said.

The work Madrigal has been doing for years — work, she said, that often fell on deaf ears — is finally being heard as society becomes more aware of race and identity issues. Now, she’s pushing to have the U.S. Latino course pay off for her students in more ways than one.

Madrigal has been working to get the class approved for a language arts credit. (Currently, it’s listed as an elective and students who complete get a elective credit for it.) But having it as a language art credit would allow students who take it to use it as an English course and receive credit that will go toward their diploma, she said.

Madrigal has done much work trying to promote the class to the SMN student body. As a result, she said it’s gotten consistent enrollment with students of various backgrounds. She said she still wants to keep it available as an elective for students who want to take it alongside other English or Advanced Placement-level literature course. While it may be a tall ask for the class to be approved for both an elective and a language arts course, Madrigal said it’s time to stray from the status quo.

Additionally, students in the U.S. Latino literature class are reading, writing and examining texts — which is what is required of a language arts credit. If the class is approved for the credit, Madrigal said it would be validating the study and affirming “[this is not just a] fluffy little class.”

“If Shawnee Mission were to really do this, it would just send a message that this kind of work and this kind of study is important and valid,” Madrigal said. 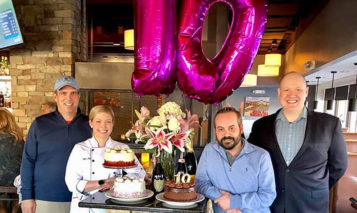