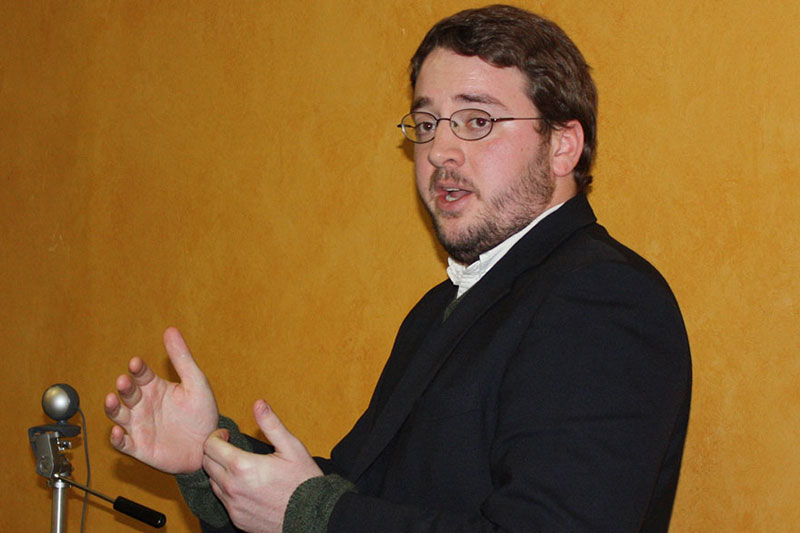 Benjamin Hodge, a Republican former state representative running for an open seat on the Kansas State Board of Education, is facing opposition from some of his fellow party members — and his history in public office is causing concern among both opponents and former colleagues.

Some Johnson County Republicans say Hodge has a history of being “disruptive” during his time as a Johnson County Community College Board of Trustees member, from 2005 to 2009, and as a Kansas state representative, in 2007 and 2008. But more than that, Republicans and Democrats alike worry Hodge has no real interest in education and is running for the state Board of Ed more for the sake of holding public office.

“I don’t think he cares about this position, I think he’s using this as a stepping stone to a representative or senate position,” said Dave Krug, whom Hodge defeated in August’s Republican primary. “He has faith there will be Republicans who vote for him just out of complete devotion to the Republican Party.”

Krug, a Johnson County Community College professor, says he isn’t among those who will vote Republican in this race. In fact, Krug has endorsed Hodge’s Democratic general election opponent Melanie Haas.

Krug said he was sad to have lost in August — not for himself, but for the students of Johnson and Wyandotte Counties that Hodge would represent if elected. The District 2 seat that Hodge is vying for is currently held by Steve Roberts, who was first elected in 2012.

The district covers all or parts of the Shawnee Mission, USD 232, Blue Valley and Olathe school districts, as well as the Turner district in Wyandotte County. (Roberts is stepping down after an unsuccessful GOP primary campaign for U.S. Senate this year.) Krug says Hodge’s apparent lack of interest in engaging with constituents during the board of education campaign is a telltale sign that Johnson Countians can’t expect anything different if he wins.

“He is totally banking on people pulling the Republican knob on Election Day, and it will be very sad for the students of Johnson County if he wins because, basically, they won’t have a representative on the Kansas State Board of Education,” Krug said. “I know that sounds strong, but that is Mr. Hodge’s history.”

Hodge has not appeared at any public forums this campaign season (including one hosted by the Post) and has not responded to the Post’s repeated attempts to contact him. His social media accounts show little to no activity, and he has yet to update his campaign website from his unsuccessful 2016 campaign for Johnson County Board of County Commissioners.

For her part, Haas says Hodge didn’t do any favors for public schools during his time as a Kansas state representative from the 39th District more than a decade ago, which at that time covered parts of western Shawnee and Bonner Springs.

She said his apparent lack of effort in this current campaign and his previous track record in elected office speak louder than anything.

“This is a candidate who hasn’t so much as posted a single Facebook post or updated his website,” Haas said. “He’s a serial politician and he has not yet expressed any interest in public education, or any reason for running. That concerns me a great deal.”

Along with his endorsement of Haas, Krug says he will continue to support her financially because he is “100% convinced she will represent our students very, very well.”

There are several key duties the Kansas State Board of Education undertakes that impact K-12 students, including approval of state testing and assessment programs and the establishment of high school graduation requirements.

In addition, the Board lists four major functions on its website:

In July, the state board of education received scrutiny when it voted 5-5 rejecting Kansas Gov. Laura Kelly’s executive order delaying the start of school amid the COVID-19 pandemic. The board’s decision threw the choice to local districts. (All Johnson County public school districts ultimately decided to delay their start dates until after Labor Day.)  Current District 2 board member Roberts voted against Kelly’s order.

It’s hard to get a sense of what policies and priorities Hodge would have serving on the board. He did not respond to multiple requests for comment for this story, and he has not filled out a questionnaire sent to both him and Haas, made up of priorities suggested to us by readers.

His website for his 2016 county commissioner campaign describes him as an “economic conservative.” The sole mention of education on that site says, “Let’s put children and parents first in education.”

Hodge’s Facebook page has not been updated since February, 2019. Many of his posts prior to that are focused on hot-button issues like abortion and immigration, but he also posted occasionally about education-related matters.

In December, 2017, he shared an article from the right-leaning website The Federalist entitled, ‘Why Every American Should Study Western Heritage 101.’ It’s a recap of a lecture given by Larry Arnn, the president of private conservative Hillsdale College, in which Arnn compares Americans’ lack of knowledge about U.S. history to a “virus.”

“There’s a crisis, and what that means is, soon enough … we’re going to have to pick how we govern ourselves,” Arnn is quoted as saying in the article. “That choice, however, can only be well-made by somebody who has a thorough understanding of the two alternatives, either this progressive-bureaucratic form or the constitutional form that has governed America for most of its history.”

Additionally, Hodge posted a message on Facebook in September, 2018, in which he argued private schools are rapidly growing because it’s “increasingly difficult to find public school leaders who use reason and logic to make decisions.”

Another 2018 post shared an article about sexual assault allegations against an Olathe Public Schools teacher, with Hodge writing, “K-12 government schools in Johnson County are rapidly declining in quality and safety, while taxes are rapidly increasing.”

Johnson County Republican Party Chairman Fabian Shepard admits he has not had any conversations with Hodge during this election cycle. Shepard said he has attempted to reach out to Hodge and has asked a mutual contact to let Hodge know he would like to speak with him.

Still, Shepard said the party supports all Republicans on the ballot this year.

A pattern in elected office

Stephanie Sharp sat next to Hodge when they both served as Republicans in the Kansas House of Representatives in 2007 and 2008. Now a political consultant, Sharp paints the portrait of a colleague who was often either disengaged in the intricacies of legislating or, when he was present, was hard to work with.

Sharp recalls having to frequently hold the roll call for Hodge or go physically locate him in order for him to cast a vote. If the Johnson County delegation, for example, wanted a bill passed, Sharp says, she and another lawmaker sitting on the other side of Hodge would be asked to help keep Hodge in his seat when it became his turn to vote.

That pattern continued when Sharp was later elected to the JCCC Board of Trustees in 2009, the same year Hodge ran for reelection on the board and lost. (Public records suggest he served in the Kansas House and on the JCCC Board simultaneously for two years.)

When she ran in 2009, Sharp says, she remembers telling constituents that she wanted the board of trustees “to be boring again.” That’s because when Hodge was a trustee, Sharp said the board’s meetings, streamed live online, were often referred to by college patrons as a source of entertainment, mainly because of Hodge’s behavior during the meetings.

“There are a lot of people that are disruptive, but most times they have good intent,” Sharp said. “I always felt like Ben was disruptive to be disruptive.”

Haas, Hodge’s general election opponent, said this pattern of behavior is something she’s heard other JCCC community members are concerned about now.

“There’s not a lot of damage he could do on the JCCC board, that’s pretty low profile — in a position like [Kansas State Board of Education District 2 seat], he could really do some damage,” she said.

Sharp says she and Hodge agree on some issues, but she adds that she doesn’t believe he has an actual interest in serving on the state board of education, nor to her knowledge, does he have much experience with K-12 education.

If he wins the board of education seat, Sharp said, the board’s reputation could take a hit.

“He would just, I would say, bring down the level of the [board] into the mud,” Sharp said.