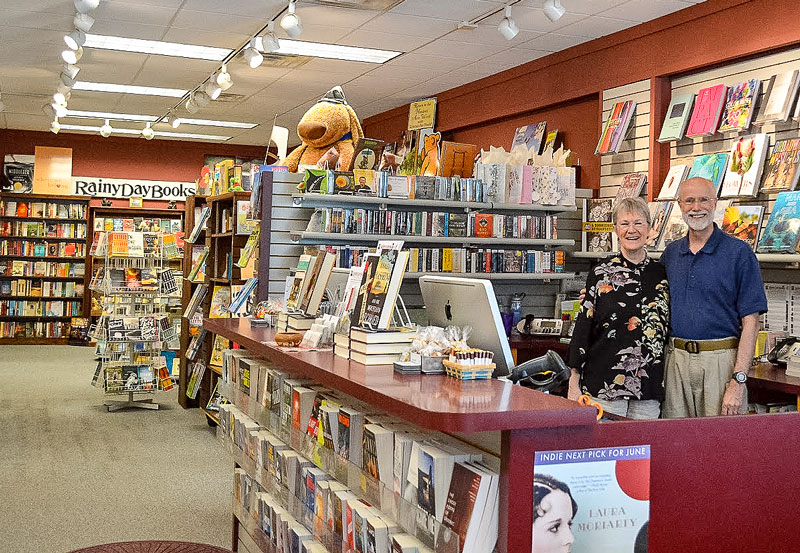 Rainy Day Books is quickly approaching its 45th anniversary as a beloved Fairway bookstore, and owners Vivien Jennings and Roger Doeren are committed to investing in and reopening the store by mid-November. Photo courtesy of Roger Doeren.

As the longtime Fairway tenant, Rainy Day Books, approaches its 45th anniversary on Nov. 4, owners Vivien Jennings and Roger Doeren are preparing the store for a reopening in mid-November.

Jennings and Doeren closed the beloved bookstore due to COVID-19, and began asking the community for donations via GoFundMe — which now amounts to more than $85,000, but has yet to reach the store’s goal of nearly $300,000. The store shifted to curbside pick-ups and additional online orders, but revenue-generating author events are on hold and sales are down by 30%, Jennings said.

‘People have been really kind’

Now, Jennings said Rainy Day wants to return the love and support received from customers by making the commitment and investment to reopen the bookstore.

“People have been really kind and wonderful,” Jennings said. “They’ve sent us notes, they’ve brought us food, they’ve brought us treats, they have just been wonderful. “But the loss of the complete revenue and from all of those events [we usually do], we just have to rebuild it and that’s going to take some time.”

Between now and mid-November, the Rainy Day team will be rearranging, packing and reconfiguring the store layout to allow for social distancing in a tight space. There will be limited phone support, but customers can make orders online and submit orders via email at Mailbox@RainyDayBooks.com.

What customers can expect when the store reopens

When the store reopens, customers will be able to safely browse for books and in what Jennings said aims to be an open and inviting space. Although the pandemic brought on unexpected challenges, she said she feels lucky for being able to work as an essential business due to school partnerships.

“We’re lucky because not many were able to [go back to work] until later,” Jennings said. “I feel very blessed and people have continued to be very, very supportive, and we just appreciate it.”

“We’re doing our best,” Jennings said. “We want to create an atmosphere [customers] will just love and they’ll want to come to and we’ll talk to them and have the kind of store we had before, only better.”