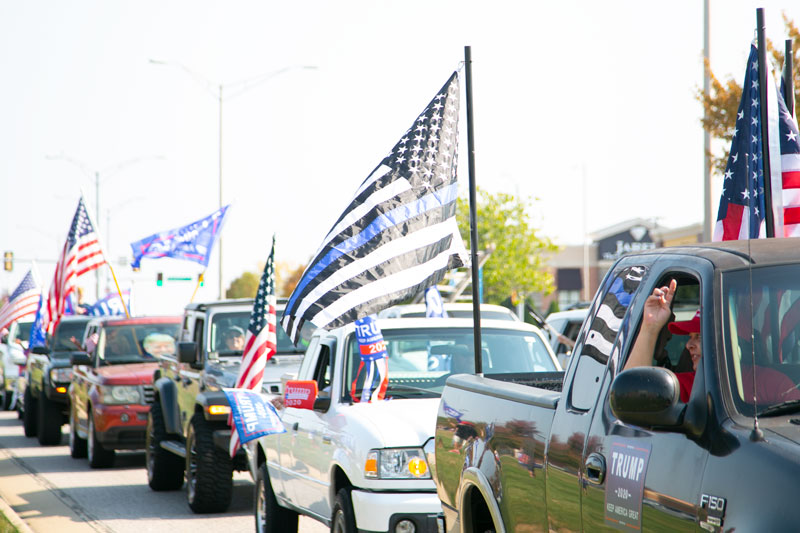 The Johnson County Trump truck parade, hosted by KC Trump Truck Parade, drew thousands of President Trump supporters calling for another four years of the administration. The parade concluded at a Back the Blue rally off 119th Street and Metcalf Avenue, with hundreds in the crowd listening to county officials and a St. Louis couple known for pointing guns at protesters in June 2020.

Thousands gathered in Overland Park for a truck parade, the event one in a series of such parades hosted by KC Trump Truck Parade planned throughout the metro over the final month of the campaign. Following the two-and-a-half hour parade, some Trump supporters met at the ending location, a three-hour “Back the Blue” rally at the northeast corner of 119th Street and Metcalf Avenue.

While many planned to participate, some Trump supporters like Kayla Walker and Ariael Herdt found themselves caught in the parade while running errands. The pair — who stopped by their Lenexa church, Nexus, to grab business cards before joining the crowd of parade watchers — said the energy at the parade mirrored that of a football game.

A group of counter-protesters gathered at 135th Street and Metcalf Avenue, one of the four designated parade-watching areas. Rebekah, a counter-protester who chose not to share her last name, said she and a friend decided to join to show there’s another side to everything.

“I think that the way Trump’s campaign is going, it’s not a very good way,” Rebekah said. “It’s not likely to be safe for a lot of people, and a lot of people are likely to end up losing their rights or losing even their safety.”

County officials speak at “Back the Blue” rally

The parade ended with a “Back the Blue” rally, with hundreds of people — a vast majority of whom were not wearing masks or adhering to social distancing guidelines — showing their support for law enforcement. Johnson County Sheriff Calvin Hayden, who is up for re-election unopposed in November, said it was meaningful to look out at a crowd that supports law enforcement at this time.

Hayden alluded to a July 24 protest in Overland Park that ended with the arrest of four demonstrators, including Shawnee resident Darrien Richmond, who has been charged with assault on a law enforcement officer. Officers’ body cam footage from that night released by the city of Overland Park shows Richmond getting into an altercation with officers as they arrest Richmond’s wife for not walking on the sidewalk.

Hayden said he would not allow people to walk down residential streets and “terrorize” neighborhoods. He said the protesters have not come back since they were arrested, although protesters did march near Overland Park Mayor Carl Gerlach’s home in August, calling for justice for Richmond.

On Saturday, Hayden also said he has 500 state law enforcement officers working for Johnson Countians “24/7” — and some who won’t take vacation following the Nov. 3 election in case of any civil unrest.

“I got 100 [officers] ready for any social unrest, Overland Park’s got a few, Olathe’s got a few,” Hayden said. “We’ll stand strong for you because if they come here, they’ve come to the wrong place.”

Hayden said he’s “got a darn good” district attorney who supports him, and will prosecute anyone who violates the law. Additionally, Hayden said he and other officers will do their best to keep the county safe so “you can walk your neighborhoods with your children and your grandchildren and you don’t have to worry about being shot at.”

Steve Howe, the current district attorney, also attended the rally and spoke to the crowd. Howe is facing a re-election challenge from Democrat Zach Thomas. It’s the first contested Johnson County DA race since Howe was first elected in 2008. On Saturday, Howe echoed Hayden’s comments about the two working together.

“It really makes me proud to be a Johnson County resident to see this kind of support for our law enforcement officers,” Howe said. “We’ve seen when law enforcement and prosecutors don’t work together — those cities are burning, what we see in Portland and Seattle, up in Minneapolis and St. Louis, it’s when we don’t work as a team.”

Rally goers were surprised with two guest speakers: Mark and Patricia McCloskey, a St. Louis couple who gained notoriety in June for brandishing guns at protesters who were marching by their home. The McCloskeys were recently indicted by a grand jury for unlawful use of a weapon, among other charges.

Mark McCloskey told the crowed Saturday that protesters, who have been demanding police accountability and a reckoning with race in cities across the U.S. for months now, go against traditional American values, and because of this, he encouraged the crowd to vote Republican down the ballot in November.

“This is the most important election of your entire lives,” he said. “We stood face to face, and we saw the future we all face if we don’t win this election.”

Howe spoke to the McCloskeys, as well, and said “what happened to them is absolutely disgusting.” If a similar situation happened in Johnson County, Howe said “the right people are going to get arrested.”

“As a lawyer and a person who took the oath of office to protect people and uphold the laws of the U.S. and state of Kansas, to see someone taken advantage of in that way when all they were trying to do was defend their home and their property and their family, it disgusts me that there are prosecutors out there who won’t do their job,” Howe said.