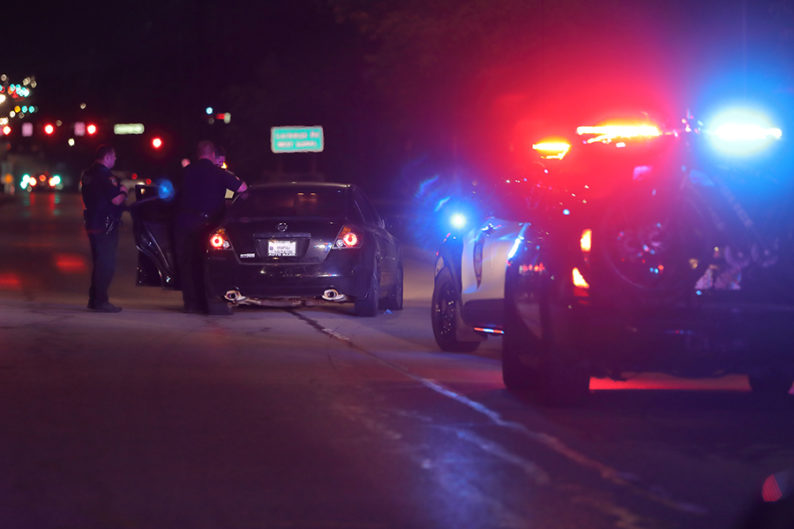 Police searched the vehicle after it stopped just east of Allman Road in Lenexa, where four suspects fled on foot. Three of the suspects have been arrested as of Saturday morning. Photo credit Mike Frizzell.

Police arrested three people after a car refused to stop for law enforcement in De Soto and Lenexa on Friday evening.

A Johnson County Sheriff’s Deputy attempted to stop a suspicious vehicle near 83rd Street and Peoria Street in De Soto just before 8:30 p.m. The black Nissan Altima’s driver refused to stop for the deputy and ran at least one stop sign.

Recorded radio traffic indicates the deputy was not in pursuit but continued to follow the vehicle, which was driving below the speed limit. The deputy tried to make a traffic stop two additional times before the driver accelerated to 100 mph on eastbound 83rd Street near Kansas Highway 7. The deputy stopped following the car, which was last seen at “over 100 mph” near 83rd Street and Woodland Drive in Lenexa.

The vehicle continued east on 83rd Street, around the curve where 83rd Street becomes 87th Street.

A Lenexa officer was able to get behind the car on eastbound 87th Street near Winchester Street in the City Center area. Radio traffic indicates the car was driving below the speed limit, and Lenexa officers were not in pursuit.

Master Police Officer Danny Chavez says a Lenexa officer was able to use stop sticks on the vehicle, which flattened three of the tires.

At 8:47 p.m., officers reported the car was driving under 10 mph and slowed to a stop just east of Allman Road.

Chavez says that is where four people ran from the vehicle.

Officers searched for nearly an hour, locating and arresting one additional suspect.

“We have three in custody,” said Chavez. “No known charges or description on the fourth individual.”