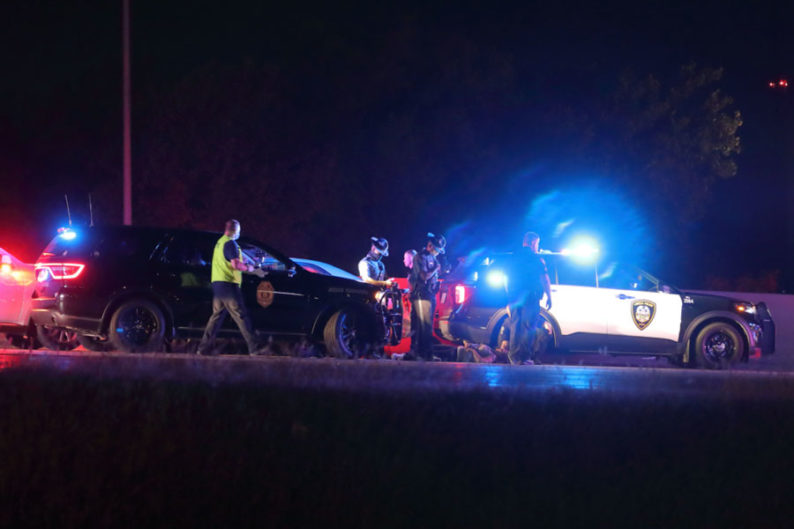 The scene at the end of a law enforcement pursuit of a vehicle along northbound I-35 near Shawnee Mission Parkway in Merriam. Photo credit Mike Frizzell.

A woman in her 20s was transported to an area hospital after leading the Kansas Highway Patrol on a brief pursuit Thursday evening.

According to recorded radio traffic, just before 8 p.m., a driver called Shawnee police to report a silver Toyota that was driving southbound on Kansas Highway 7 near Shawnee Mission Parkway with no lights, driving slowly and swerving between lanes.

Shawnee and Lenexa officers were not able to catch up with the vehicle before it reached Olathe.

Radio traffic indicates Olathe officers then attempted two times to make a traffic stop on the vehicle, but the driver continued and ran at least four red lights. Officers followed the car east on Old 56 Highway to northbound Interstate 35.

A Kansas Highway Patrol trooper attempted to stop the car for a third time on northbound I-35 near 95th Street in Lenexa. The driver did not stop.

At 8:30, troopers performed a Tactical Vehicle Intervention on northbound I-35 just south of Shawnee Mission Parkway in Merriam. The maneuver, in which law enforcement try to nudge a suspect car or abruptly change its direction by hitting it, spun the fleeing car around, allowing law enforcement to stop the driver.

Johnson County Med-Act was called to the final car stop scene and eventually transported the woman to an area hospital to treat non-life-threatening injuries.

No law enforcement officers were injured. One trooper reported minor damage to his patrol vehicle.

No other details were immediately available. Check back with this report for updates.