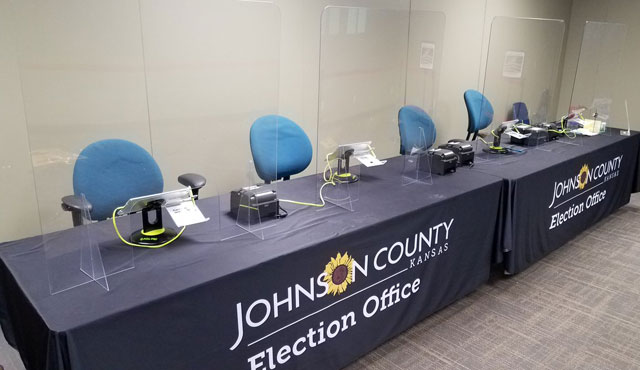 On Thursday, Johnson County Commissioners addressed some of the costs associated with holding an election during a pandemic by accepting an $856,000 grant to help pay for equipment, staffing needs, and protective barriers. Photo via Johnson County Elections Office.

The demands of keeping voters safe from the coronavirus and the high interest in this year’s campaigns are making for an expensive election this year. On Thursday, Johnson County commissioners addressed some of those costs by accepting an $856,000 grant to help pay for equipment and for a $25-a-day stipend increase meant to encourage poll workers not to quit.

“We have operated in a world of unknowns at the election office with things changing on a daily basis,” Election Commissioner Connie Schmidt told the Board of County Commissioners. Although presidential elections are usually busy, interest this year is especially high, and that is complicated by the pandemic, she said.

The grant, from the Center for Tech and Civic Life, will offset some of the costs of absentee ballot processing, equipment and staffing, Schmidt said. The center is a Chicago-based nonprofit providing funding for local elections. It describes itself as a team of technologists, researchers and election experts, “working to foster a more informed and engaged democracy, and helping to modernize U.S. elections.”

Many of those costs have to do with mail-in voting, Schmidt told commissioners. The county plans to mail out more than 140,000 ballots on Wednesday, and “trays of new applications are arriving every day,” she said.

The grant is expected to cover $239,300 for those absentee ballot costs, which includes election worker pay, outreach and educational materials and $130,000 for a Mail Ballot Verifier System from Election Systems & Software, the Omaha company that sold the county its voting machines.

According to the ES&S website, the verifier is an automated system for logging and stamping mailed ballots and electronic review of signatures.

Boost for poll workers —the “guardians of democracy”

The larger-than-expected turnout, which county election officials say could top 90%, also translates into more in-person polling sites this year. There will be 10 advance voting sites, each of them needing at least 20 workers for 13 days of voting, beginning Oct. 17.

The commission also voted to increase the daily stipend for election workers, whose pay hasn’t been increased in years, Schmidt said. Election offices throughout the country have had trouble recruiting and retaining workers because of COVID-19. In Johnson County, Schmidt said, “on a daily basis we lose them, then get more, then lose them.”

Although most poll workers aren’t in it for the money, Schmidt said she hopes the raise will provide a little extra incentive for them to stay on.

“These are the guardians of democracy. We can’t run an election on Election Day without the troops that get up at 4:30 in the morning and stay there until the last voter in line has voted. They are my heroes.”

The county commission also learned from Public Health Director Dr. Sanmi Areola that coronavirus cases appear to be stabilizing or trending slightly downward. The county has averaged 113 cases per day the past two weeks, down from a high of 115, he said.

Elizabeth Holzschuh, county epidemiologist, said schools that have returned to in-person learning have had good results and little transmission in classrooms where masks are worn and distancing is practiced. Most of the county’s transmission has happened in group settings like weddings, bachelorette parties and bars, she said.

Holzschuh also urged people who think they are suffering from seasonal allergies to get tested anyway. People who delay testing because they think they have hay fever may end up exposing others, she said. 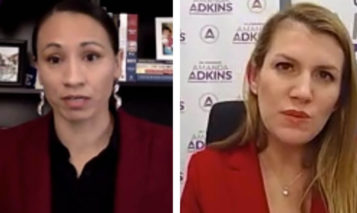