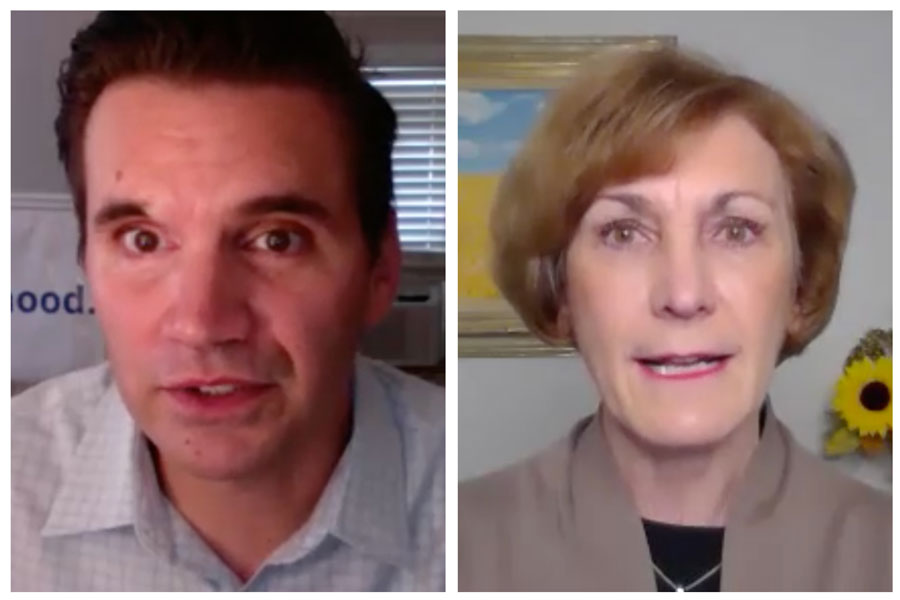 SM Post Editor Kyle Palmer (left) speaks with Kansas Sen. Barbara Bollier, who is aiming to be the first U.S. Senator from Johnson County elected by Kansans in roughly a half-century. Screen shot via Zoom.

The Post is arranging one-on-one interviews over Zoom with all four candidates running for the two federal offices on the ballot in Johnson County in 2020 — U.S. Senate and the 3rd Congressional District. The questions we ask will be policy- and issue-focused, based on the priorities our readers have told us are important to them.

Democratic state Sen. Barbara Bollier of Mission Hills is in a competitive race with Republican U.S. Rep. Roger Marshall of western Kansas for the open U.S. Senate being vacated by the retiring Pat Roberts.

The Post last interviewed Bollier at a campaign stop in Kansas City, Kansas, in August.

In this latest interview, Post editor Kyle Palmer asked Bollier, a retired anesthesiologist, about several topics that have been raised by our readers as ones that are important to them going into the Nov. 3 general election, including:

COVID-19 and the federal response

[1:19] Cases in Kansas have been trending up again. They’re on the rise in Johnson County, according to the county health department. Testing is still not widespread enough but the results of testing still suggest that community spread is happening in Johnson County and in other parts of Kansas. At this stage of the pandemic, what do you think the federal government should be doing to continue to combat the spread of this disease? What policies and steps would you advocate for if elected?

[3:05] Just a day before taping this interview, President Trump seemed to short-circuit negotiations over a new coronavirus relief package, telling Republicans in a tweet NOT to work on a deal with Democrats until after the election. Then, he sent out more tweets saying he would sign stand-alone measures that would renew another round of stimulus checks for Americans and more funding for small businesses. Either way … the economic fallout from the pandemic remains severe: the Kansas Department of Labor says more than 100,000 Kansans remain without work, an unemployment rate near 7%. What can Congress do to help Americans still hurting economically by the pandemic?

[5:05] A striking thing about the recession caused by the pandemic is its unequal impacts. There is growing evidence to suggest that in Kansas and across the country the income gap among the wealthy and the middle class compared to lower-income Americans has only grown wider during the pandemic. Inequality was already an issue for the Democratic Party before the pandemic, a lot of the more ambitious — some would say unrealistic — policy proposals like so-called ‘Medicare for All’ and free college tuition were aimed, in part, at addressing that inequality. How should that be addressed now in light of growing income and wealth gaps exacerbated by the pandemic?

[7:17] A clear difference between you and your opponent is on health care. As a state senator in Topeka, you have been one of the more visible champions of Medicaid expansion for years now. Medicaid expansion is part and parcel of the Affordable Care Act, which the Trump administration is challenging in federal court now. If you’re elected, what do you want to see happen with the ACA?

[9:25] With Medicaid expansion, an argument I hear frequently from Democrats in Kansas is this: by not expanding Medicaid, Kansans are basically giving their taxpayer money away, funding other states that have expanded Medicaid. I think conservatives would push back and say, even with 90-10 match — if Kansas expands Medicaid, the state will pay basically one dollar for every 9 federal dollars to fund it — still, SOMEONE is paying for it. That would be the federal government. I’d like you to respond to that criticism that this is an expansion of another government program that, in general, the U.S. can’t afford…

The Supreme Court and abortion

[12:00] A new ABC/Washington Post poll shows 57% of respondents say it should be the next president and the next Senate that fills the Supreme Court vacancy. Thirty-eight percent say it should be President Trump and this Senate. But let’s say President Trump’s nominee Amy Coney Barrett is confirmed before the inauguration … but then Joe Biden wins the presidency and/or Democrats make gains in the Senate. This is a scenario you could be confronted with: would you support proposals like adding justices to the Supreme Court, putting term limits on Supreme Court justices, as a response to what many Democrats see as Republicans playing unfairly with Supreme Court nominations, dating back to 2016 and Merrick Garland …

[14:27] Is Amy Coney Barrett’s faith fair game in scrutinizing her fitness for the Supreme Court? She’s Catholic, it’s been reported that she has been part of conservative group called People of Praise that emphasized traditional gender roles for women and men. She herself has in speeches and writings emphasized how her faith influences her in her public role. Do you think Democrats should pursue that line of inquiry if/when hearings begin?

[15:48] Abortion is central to the coming fight over Barrett’s confirmation. And abortion is a major difference in your race for U.S. Senate with Congressman Marshall. We gave him an opportunity to talk about this admittedly hot-button topic. I’d like you to explain your position on abortion … and has it changed or evolved in your years as an elected official?

[17:30] Part of the Democratic Party platform is to end the Hyde Amendment. This is the federal provision prohibiting federal funds from going towards abortions, with a few exceptions. The Hyde Amendment is “rider” that has to be tacked on to federal appropriations bills and has been attached and passed by Congress now annually for more than 40 years. Democratic presidential nominee Joe Biden says if is elected president, he would move to end that. If elected, would you be in favor of repealing the Hyde Amendment?

[19:02] Let’s talk about the ongoing social justice movement that was sparked by the killing of George Floyd and other Black men and women at the hands of police. You and I have discussed this before, and this national conversation is surely going to be with us after the election. And a new Congress may very well have to deal with some of the issues being raised: police accountability and transparency, reckoning with America’s legacy of slavery, discrimination and racism. Our Congressional representatives will need to have thought about these issues in order to have debates over them. What have you yourself done to educate yourself about issues of racism, discrimination, bias? Have you read books? Talked to people?

[21:27] You say you’ve to Kansans of color, Black Kansans about how they feel about the protests and Black Lives Matter movement? What do they say to you about what they want?

[22:59] There has been a lot made in recent years over how Americans’ media consumption has become siloed and bifurcated and polarized. Where do you get your news? What sources do you turn to on a daily basis to get the information you need to inform yourself about the world and make decisions?