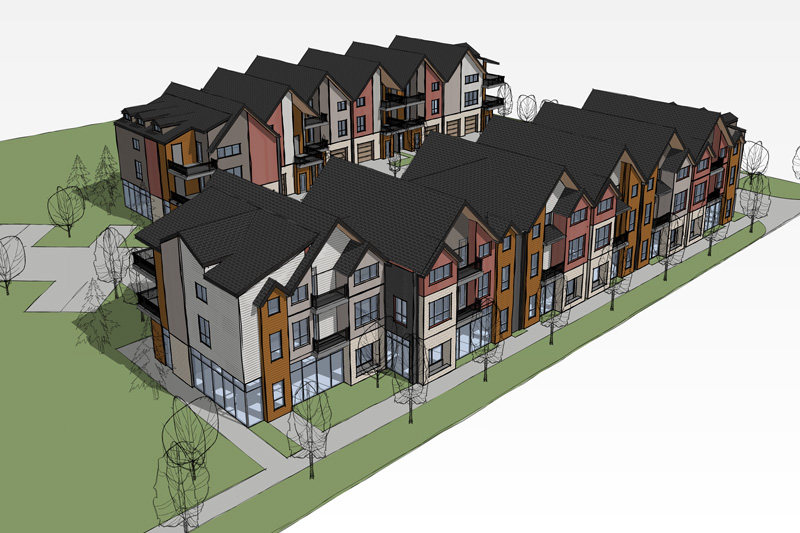 The Shawnee Planning Commission on Monday voted 10-0 to approve a site plan for Blume Shawnee, a new residential, retail and office project in the 6100 block of Nieman Road, on the southeast corner of Roger and Nieman. Image courtesy Box Real Estate Development.

Shawnee has given the final OK for a mixed-use development planned for the city’s downtown area.

The Shawnee Planning Commission on Monday voted 10-0 to approve a site plan for Blume Shawnee, a new residential, retail and office project in the 6100 block of Nieman Road, on the southeast corner of Roger and Nieman. Commissioner Randy Braley was absent.

Box Real Estate Development — the same company from Lee’s Summit, Missouri, that just purchased and will soon renovate the Hartman Hardware building — is spearheading the live-work project, which the city determined to be a catalyst site that will spur further investment and redevelopment downtown.

The project plan on the roughly two-acre site includes the following:

The site will also include the following utilities and amenities:

The city still owns the property as part of the Nieman South stormwater drainage project but is under contract to sell the site to Box Real Estate Development. The site includes drainage enhancements, underground utilities and walking/biking trails and paths that connect to the rest of the downtown district.

The site is within a federally designated Opportunity Zone and a Kansas Neighborhood Revitalization Act District, according to city documents.

Pearson said he took inspiration from the design and architectural elements in Shawnee’s sister city of Erfurt, Germany, when considering the look of the mixed-use project. He named it Blume Shawnee, as “blume” is the German word for flower.

The development’s vertical design allows for ownership opportunities of multi-tenant investment properties, according to city documents.

“Blume Shawnee units are designed for working professionals and incorporate features normally only found in custom homes or high-end condos, so we are being very intentional about how it all comes together,” he said.

Pearson said the mixed-use site targets residents who want to work from home while maintaining a storefront presence. The concept is similar to what is being proposed at the former site of Mission Bowl, in Mission’s downtown area.

For example, residents could lease their home and live above their shop. However, the site can be leased with commercial and residential kept separate. For now, the developer is first opening up reservations for full buildings before offering individual units. Pearson said this gives entrepreneurs and executives working from home the first priority.

The residential townhome-style units range from 1,400-square-foot flats with two bedrooms and two bathrooms, up to 2,050-square-foot lofts. Unit prices will range from $2,000 to $3,000 per month, and commercial space will be $950 to $1,700 per month. Each of the 12 three-story buildings is available for rent-to-own, with each building’s three stories to be sold as one package. In other words, those interested in renting to own would have to purchase both the residential units and the commercial portion below. Building owners are able to lease to third parties.

“The live/work townhome concept is nothing new, in fact this style of living has been the quintessential product type for centuries in many parts of the world,” Pearson said. “Given the events of the last few months and the dramatic increase in the number of people working from home, we anticipate the demand for live/work in general to skyrocket.”

Pearson said the design of Blume Shawnee is also intended to alleviate health and safety concerns related to common surfaces and air quality, particularly during the COVID-19 pandemic. Such amenities include:

The project is slated for a groundbreaking in January 2021.