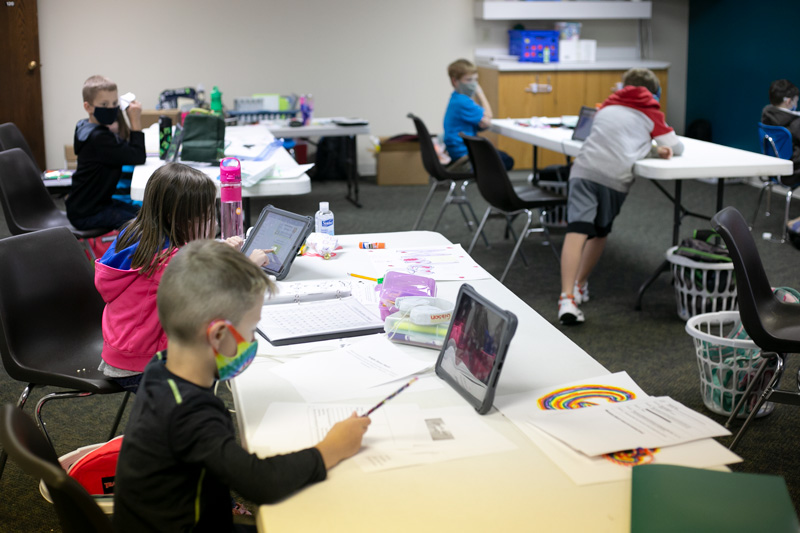 Shawnee is drafting city code to regulate learning centers for students learning remotely. The new code will likely hold learning centers to similar standards as childcare providers. In the meantime, Shawnee is operating under an administrative policy that considers child safety a top priority. Above, file photo of students at a learning hub in Prairie Village.

In the meantime, Shawnee is operating under an administrative policy to regulate learning centers, which have grown rapidly in popularity as more students do distance learning during the pandemic. Stephanie Malmborg, deputy community development director, said child safety is a top priority for the policy as well as the draft city code.

The policy currently allows learning centers in all zoning districts and must also meet the following regulations:

Violations of these requirements could result in citations or fines. To ensure accountability and adherence to these guidelines, people can anonymously report violations through the city’s online Citizen Service Request tool, selecting “Code Enforcement” as the category.

In addition, the draft code will consider the following items:

While city staff began this process as a direct result of the COVID-19 pandemic, the new code will likely remain on the books once the pandemic is over and students return to full on-site learning, city officials say.

Malmborg said that even though some schools are already returning students to in-person learning, city staff still plan to draft regulations for learning centers because some students will probably continue learning remotely into the future.

During a discussion with city staff Monday evening, some members of the Shawnee Planning Commission said they would like to hold learning centers to a similar standard as child care centers and in-home daycares. To that end, the new city code will probably also continue to allow learning centers in any zoning district and require a special use permit to operate.

The process for a learning center to obtain a special use permit would likely be the same as that of a daycare facility. Learning centers would require approval from the state, proper licenses and proof of insurance, among other requirements.

Chairman Dennis Busby said “there isn’t that much difference” between the purposes of a child care facility and a learning center, so he would prefer requiring equal treatment between the two types of uses.

“As for individual homeowners, if they open another daycare center and then want to teach kids in there that are all fifth graders, they’re meeting our rules for a daycare center, so I could care less what they’re doing there,” Busby said. “It would seem to me as long as we treat them as basically a daycare, then everything would be equal on that side.”

The planning commission also reserves the right to reject any applications for learning centers if the location is considered to be dangerous for children or unfit for learning, such as a manufacturing or industrial building. If, for example, a commercial building sought to open a learning center but lacked improvements such as fire sprinklers, the city could require those upgrades before allowing learning centers to operate on site.

Commissioner Bruce Bienhoff said he wants to ensure facilities being repurposed for learning centers are good environments for students.

“I would hate to see them stuck in the back of a working warehouse, obviously, but if there is a partitioned-off space that was improved much like an office, it certainly would make sense to allow that with the appropriate permitting,” Bienhoff said.

Commissioner Kathy Peterson raised concerns that the code could be cost-prohibitive for businesses seeking to open a learning center, as they would need to pay fees for a separate business license for the new use. Doug Allmon, community development director, said a business license for a learning center would probably be in a similar category as an in-home childcare facility, perhaps $50 to $100.

“We’re trying to encourage and help during a pandemic rather than run people out of business because their license is $2,000,” Allmon said.

Noting a lack of familiarity with the subject, Commissioner John Montgomery said he would rely on staff on next steps.

“I’m struggling to know where the trapdoors and the hazards are here,” Montgomery said. “I’m really leaning on staff to provide their expertise and what they see out there and what their recommendations are.”

City staff will draft a code and present it to the planning commission Oct. 19.