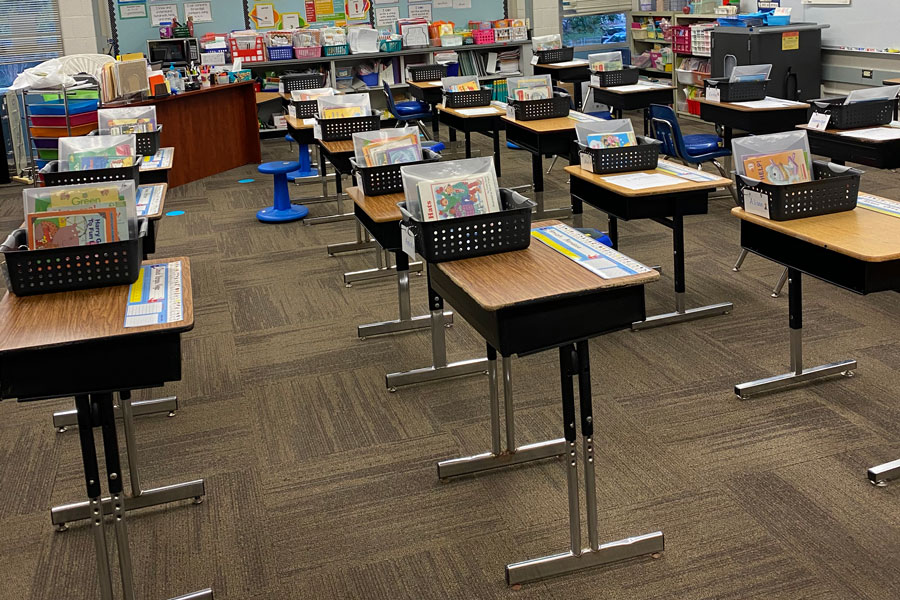 On Monday, some students began returning to in-person classes in Shawnee Mission Schools for the first time since March, when the COVID-19 pandemic prompted schools across the Kansas City region to go virtual.

The kindergartners, 1st and 2nd graders returning to in-person learning this week are not the first SMSD students to come back this year (some special education students have been receiving in-person services since the start of September), but they are part of the initial phase of the district’s broader reopening plan that could see most of SMSD’s roughly 27,000 students back in some form of in-person learning by the end of October.

Still, with new COVID-19 cases in Johnson County again on the rise, there is lingering trepidation and uncertainty over the district’s reopening plans.

Some SMSD teachers worry about the risks posed by being in an enclosed classroom with students for hours at a time. Meanwhile, parents are split — with some urging the district to reopen more fully and others fearful of the risk of exposing their children to COVID-19.

Here are some perspectives as SMSD students return to class.

‘I am probably working one-and-a-half jobs’

Rosalie Schard has taught in SMSD for more than 40 years, but she’s never experienced anything like the start to this school year. The beginning of the year is normally hectic, she admits, but trying to teach during the unprecedented circumstances created by the pandemic has been a challenge.

“I am probably working one-and-a-half jobs right now,” she said. “I work at school [teaching students remotely] from about 7:30 in the morning to 4:30 in the afternoon and then keep working from about 6 to 9 at night at home— checking stuff online, making sure everything is together.”

Schard, a 2nd grade teacher at Pawnee Elementary, has spent much of the last week situating her classroom for the return of students. That has meant moving furniture, measuring the spaces between desks with a yardstick (three feet from “center of desk to center of desk,” at the district’s recommendation) and bundling student supplies into personal bins so they won’t have to share things like books and crayons.

All of that, while trying to manage students’ and parents’ expectations for what in-person learning will be like.

“I don’t think many of them understand how this is going to work,” she said.

It won’t be like the school they’re used to.

Students will attend class in small groups (or cohorts) two days a week — one group on Monday and Tuesday, another group on Wednesday and Thursday. (On Friday, all students will learn virtually.) When they’re at school, they won’t leave their classroom except to go to lunch and the bathroom. To help them do that, Schard has put tape on the floor around the edge of her classroom, spaced out six feet apart, so kids can line up safely.

Amid all of this preparation, Schard admits she’s scared, for her students and herself.

“I feel like at my age, I shouldn’t be taking the risk,” she said. “But my other choices were to retire or to go on leave. I’d hate to do that to the kids.”

Still, she says after in-person learning starts this week, if “things look really bad,” she may take six weeks of accrued leave anyway.

A ‘reasonable appeal’ for in-person learning

Some parents have been urging a return to in-person learning for weeks, after SMSD was the only Johnson County school district to start with all students learning remotely. District leaders have maintained they are trying to be deliberate in their reopening, wanting to avoid a reversion to remote learning or widespread quarantines if they come back too early.

Still, parents have insisted more in-person learning needs to be happening. They have argued families are under increasing strain with kids at home and parents trying to work, and children could face long-term negative psychological and cognitive effects for being out of school for months.

There has also been a vocal push to restart high school sports. Parents and students have protested outside school board meetings in recent weeks, waving signs and chanting things like, “Let them play!”

A different kind of appeal was made at the SMSD Board of Education meeting on Sept. 29: a group of eight SMSD parents who are also doctors, submitted a lengthy letter (complete with foot notes), making what they said was a “reasonable appeal” for schools to reopen more fully.

“As Board members and district leaders you undoubtedly face a challenging task navigating this issue,” the letter read. “To many it likely appears there is no correct answer in deciding when return to school is advisable.”

The signatories went on to argue that that reopening criteria followed by the district — made from recommendations by the Johnson County Department of Health and Environment — are too conservative. They pointed out that the test positivity metric used by the county (a measure of the number of positive COVID-19 tests in a given period) has been consistently higher than the test positivity rate in Johnson County as determined by the Kansas Department of Health and Environment.

That’s due in part to differences in how the county health department and state health officials calculate test positivity rates. The county says it does not count individuals who get tested multiple times, lowering the number of overall tests that are counted and boosting the final rate.

“Rigid adherence to, and excessive weighting given to JCDHE data on this metric could make it very difficult for decision makers to return our children to schools,” the letter said.

Parents and students have voiced similar complaints previously, most notably at a public listening session hosted by the board in August.

The persistent criticism of its test positivity calculations may have contributed to JCDHE’s decision last week to amend its school reopening criteria. An “orange” zone was inserted between the existing “red and “yellow” zones, appearing to relax standards on when some students could potentially return for in-person learning.

The decision had the most immediate effect on secondary students. Under the revised guidance, middle and high school students could return for hybrid learning even if the county’s test positivity rate was between 10.1% and 15%, if COVID-19 mitigation measures were in place.

Johnson County’s test positivity rate, according to data calculated by JCDHE, has been in that range for weeks. That had previously put schools in the “red,” or highest risk, zone where remote-only learning was recommended for middle and high school students.

A day after JCDHE revised its gating criteria, SMSD announced that secondary students could be able to return to some in-person learning, starting as early as Oct. 26, and the district’s plan for bringing back elementary students would continue as planned.

‘Our community is clearly not there’

But that decision bothered other parents, John Segale among them.

The day after JCDHE released its amended reopening criteria, Segale sent an email to district and county leaders, saying he was “deeply disappointed” in the choice to relax the gating criteria.

“Both the Johnson County Health Department and our school district has decided to apparently follow political and operational expediency and abandon scientific guidance in an evolving global public health emergency,” Segale wrote.

Like the parents who had urged for a swifter, broader reopening, Segale — whose children, a 2nd and 3rd grader, attend Ray Marsh Elementary — also relied on test positivity rates to make his case. He argued that Johnson County’s rate is still too high, regardless of whether the county’s or state’s measure is used, to consider expanding in-person learning now.

“Based on current positivity rates in our community, we [Segale’s family] only support educational behavior at the lowest to medium risk activity levels at this time and fully expected you to take this approach as well,” he wrote. “Our community is clearly not there at this time no matter what we all had hoped.”

Segale said his two children would likely still participate in hybrid learning for now. (Students in 3rd through 6th grades who have chosen the district’s “in person” learning option are set to return to school for hybrid learning next week.) But he said he wasn’t sure if he’d want them to attend school full-time if the district goes forward with its plans to expand in-person learning to everyday by the end of October.

“We have not taken this decision lightly and also recognize that other parents may not have the ability to work remotely as we have available to us, but based on our health conditions and our children’s long term health we do not believe it is prudent for our children to attend full in-person classes at Ray Marsh until we can ensure 6-foot social distancing and positivity rates are below 5%,” he said.