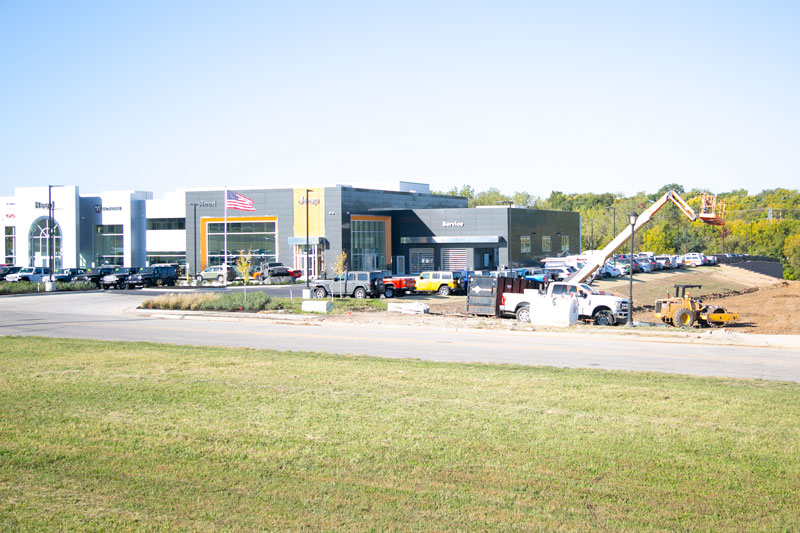 The dirt lot next to the dealership will become an outdoor showroom for Reed's Chrysler Jeep Dodge and Ram dealership. The city had previously approved the lot for development of a separate new car dealership.

The Merriam City Council last week terminated the Merriam Pointe agreement that would have brought a new car dealership to Frontage Road.

Under the termination agreement, Infiniti owner Richard Webb will sell 7000 W. Frontage Road to Randy Reed, who owns Reed Hyundai. Reed is currently building a Chrysler Jeep Dodge and Ram dealership next to the tract.

The termination agreement saves the city $1 million tax increment financing funds and will result in a four-acre parking lot and potential brand expansion, according to city documents. City Administrator Chris Engel said he appreciates Webb’s efforts and desire to deliver on his vision for the land.

“If not for [Webb, the land] would still assess at zero and would have zero economic value for anybody,” Engel said. “It really took him looking at it and saying he thought he could do something with it, and the city deciding to partner with him as an equity partner, which is, I think, why we do TIF.”

Engel said the parking lot will result in more revenue than the dead space a new building would yield.

Merriam originally committed to $6 million worth of tax increment financing under the redevelopment agreement, and that TIF would have run until July 2023. Engel said expects the parking lot will be completed by 2022.