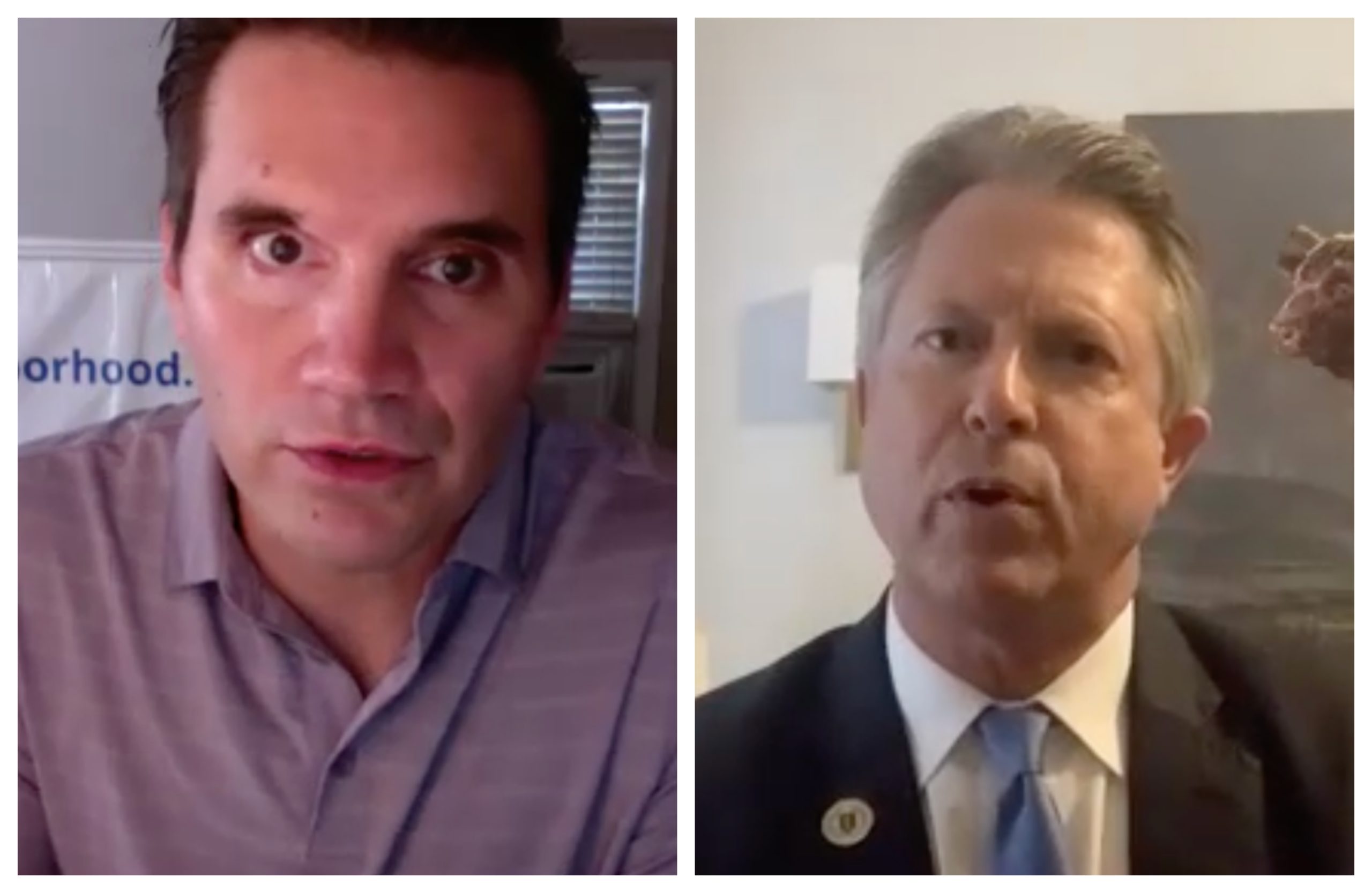 The Post is arranging one-on-one interviews over Zoom with all four candidates running for the two federal offices on the ballot in Johnson County in 2020 — U.S. Senate and the 3rd Congressional District. The questions we ask will be policy- and issue-focused, based on the priorities our readers have told us are important to them.

Republican U.S. Rep. Roger Marshall of western Kansas is in a competitive race with Democratic Kansas state Sen. Barbara Bollier for the open U.S. Senate being vacated by the retiring Pat Roberts.

The Post previously spoke with Marshall in person on a campaign swing through Johnson County in August.

In this latest interview, Post editor Kyle Palmer asked Marshall about several topics that have been raised by our readers as ones that are important to them going into the Nov. 3 general election, including:

COVID-19 and the federal response

[1:15] Cases in Kansas have been trending up again. They’re on the rise in Johnson County, according to the county health department. Testing is still not widespread enough but the results of testing still show that community spread is happening in Johnson County and in other parts of Kansas. I’ll ask a question about the economic impacts in a second, but first I want to know: at this stage of the pandemic what do you think the federal government should be doing to continue to combat the spread of this disease?

[3:18] There has been a rebound since the early days of the pandemic following the initial shutdowns. But the Kansas Department of Labor says more than 100,000 Kansans remain without work, an unemployment rate near 7%. And, maybe more strikingly, in Kansas and across the country there is growing evidence to suggest that the income gap among the wealthy and the middle class opposed to lower-income Americans has only grown wider during the pandemic. What can Congress do to help Americans still hurting economically by the pandemic?

[5:06] House Speaker Nancy Pelosi and Treasury Secretary Steven Mnuchin have resumed talks on an updated version of a coronavirus relief bill. This one has a price tag of roughly $2.2 trillion. This new package being negotiated between the Speaker and the White House includes a new $600-a-week unemployment benefits, another round of $1,200 stimulus checks for Americans, more than $200 billion for schools at a time when they’re reopening. Would you support that?

Health care and the ACA

[6:45] You oppose the Affordable Care Act, often referred to as Obamacare. You have voted multiple times to repeal it. You are on record as being in support of the Trump administration’s legal challenge against the ACA. This is a federal law the undergirds a bipartisan push in Kansas to expand Medicaid here, that’s one of the provisions of the federal law. Additionally, the ACA has led to tens of millions more people being insured. Explain your opposition…

[8:36] I think this is something that has frustrated supporters of the ACA and those seeking an expansion of health insurance. President Trump has repeatedly promised a plan to replace it and has never come through with that promise. During your first term in Congress, Republicans controlled both chambers of Congress and the White House and could not agree on a replacement. Can you give specifics for what an ACA-replacement looks like?

[11:03] Probably the ACA’s most popular provision makes it illegal for insurance companies to NOT cover someone because of a pre-existing condition. If the ACA is ultimately repealed, what happens to people with pre-existing conditions… a problem that will be made only more acute but the pandemic…

[12:35] A new ABC/Washington Post poll shows 57% of respondents say it should be the next president and the next Senate that fills the Supreme Court vacancy. Thirty-eight percent say it should be President Trump and this Senate. As a Republican who has already come out in support of filling this vacancy now — though it would not be YOU voting on it — does it give you pause that the majority of Americans seem to think this should wait until after the election?

[14:16] I think they [Democrats] would say you want a conservative court that rubber stamps what you want to do …

[15:05] Granted, Republicans control the Senate, therefore they can do what they want. Nothing they’re proposing to do is unconstitutional. There have been past Supreme Court confirmations that have occurred in a similar time frame as what’s being planned here. But there is a broad perception by Americans that this is hypocrisy after what happened in 2016. That Republicans are playing unfair. What do you say to that?

[16:08] Abortion is central to the coming fight over Barrett’s confirmation. And abortion is a major difference in your race for U.S. Senate. We’ll give state Sen. Bollier a chance to articulate her own position. What about yours? You are anti-abortion, but do you support any exceptions?

[18:44] I will say, you mention “dismemberment” abortion. Other people refer to it as “dilation and evacuation”. Separate terms for what is often the same procedure …

[20:16] We’ve talked before about the ongoing social justice movement. I think, owing in part to the fact that your father was a chief of police where you grew up … you have emphasized the public safety aspects of what happens at these protests. But I do want to ask you about the substance of the demands that protesters in many cities are asking for — things like police accountability, transparency in investigations of police killings and the enacting of policies that will decrease the disproportionate number of killings of Black people at the hands of law enforcement. Have you talked to Kansans of color, Black Kansans about how they feel about the protests and Black Lives Matter movement?

[26:35] I want to ask where you get your news, what media you consume on a daily basis to get the information you need to have the positions you have and make the decisions you need to make?