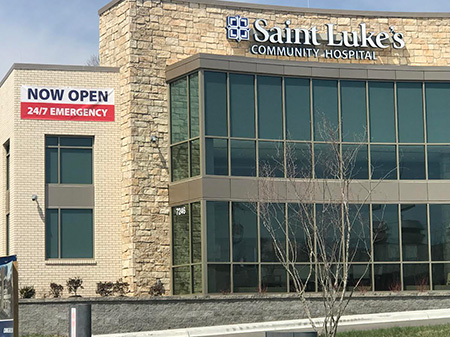 Saint Luke’s Health System Thursday announced it was closing two of its community hospitals in Overland Park — one at 75th and Metcalf and the other at 159th Street and 69 Hwy.

“Our community hospitals have been incredibly well-received by patients,” said Olm-Shipman. “Though two locations are closing—and may be utilized as sites for future service offerings—the Community Hospital model is successful and here to stay.”

Saint Luke’s expanded its Community Hospital model in 2018 and opened seven “mini-hospitals” throughout the Kansas City metro, including the one at 75th and Metcalf. These hospitals are small — typically offering only a handful of beds — and are designed to offer patients inpatient and emergency care closer to home.

But some local officials have expressed doubt about the need for such facilities in Overland Park. In 2016, the Overland Park City Council approved a special-use permit to allow a developer to tear down an existing retail structure at 75th and Metcalf in order to build a 17,000-square-foot microhospital that would eventually house St. Luke’s.

“I frankly don’t get this,” he said, at the time. “I mean, this community is littered with health care providers … and I would ask you to ask anybody in our community if they’re underserved, especially in this area. Just go down the street to Shawnee Mission Medical Center. It’s huge. We have urgent care all over the city.”

Five other Saint Luke’s community hospital locations will continue to operate in the Kansas City metro, including three in northern Johnson County:

Saint Luke’s said the decision to close the hospitals was made in order to streamline services and provide high-quality emergency care in areas that have the greatest patient demand.