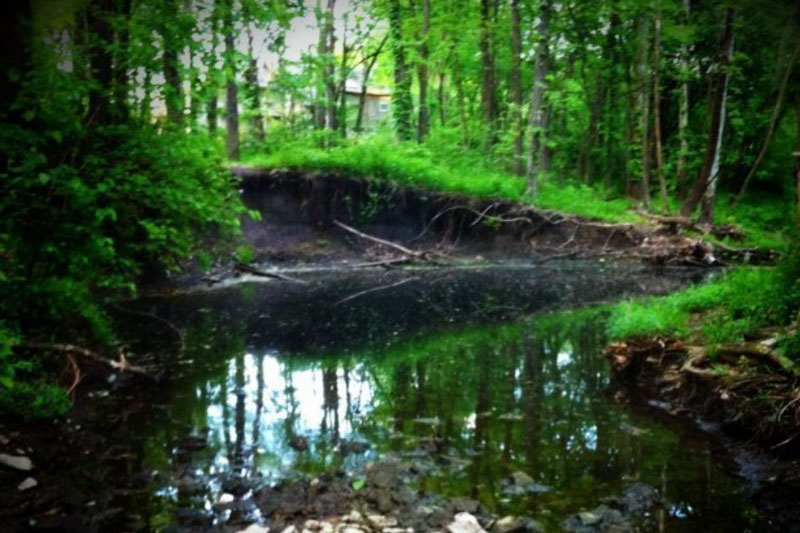 Johnson County leaders, advocates and historians are questioning the history behind Negro Creek, the 6.5-mile waterway south of 151st Street, and considering changing its name. Photo via change.org petition.

Up until this summer, Negro Creek has managed to keep a low profile in Johnson County. No signs at bridges announce it, nor are there markers at any nearby parks. Golfers at Ironhorse golf club in Leawood may have cursed the stream running through the course without knowing its name. Even local maps don’t always put a label on the little rill.

But as racially-charged place names and monuments have ignited passionate debate this year, attention is now being drawn to the the  6.5-mile waterway south of 151st Street.

Johnson County and local city leaders, historians and advocates of social justice have taken notice of the problematic name, and they are now in the beginning of a lengthy process that will decide whether to change it and, if so, to what.

An informal group led by County Commissioner Becky Fast and comprised of Leawood and Overland Park city staff, the county chapter of the NAACP, the Johnson County Museum, a private social justice group and the Kansas African-American Affairs Commission, has organized to collect historical information about the creek and to get citizen input on the possible renaming, which could be months down the road.

Emily Jeffrey of Overland Park is one of those group members. Jeffrey, who recently founded the Johnson County Task Force for Racial Equality, said she only found out about the name in August as she was planning a family picnic at Creekside Park. She came across the creek as she searched Google for directions, she said.

“I was taken aback,” Jeffrey said.

At first, she was disturbed that such an offensive name would be allowed to stand in Johnson County while cities like Kansas City, Mo., were having a discussion about whether J.C. Nichols’ name should be removed from a fountain on the Country Club Plaza. So some members of her group got in touch with Leawood city officials about changing the creek’s name.

Is the name offensive?

After talking with a friend of color and hearing more about the history, though, Jeffrey said the issue no longer seems as clear cut.

“My mistake was I assumed the name would be offensive, as a white person,” she said. But she has since learned that the potential for offense depends on the context. She said she is now trying to learn more about the creek’s history before jumping to any more conclusions.

Kenya Cox, executive director of the state African-American Affairs Commission, said there seems to be a generational difference on whether the name is a racial slur, with Baby Boomers and older people less likely to view it as such. The word, for instance, is also part of well-known organizations like the Negro Leagues Baseball Museum in Kansas City.

There has also been some concern about losing the history behind the name, Cox said.

Wandra Minor of the NAACP, concurs. She said her group is not particularly bothered by the name, but wants to make sure there’s a historical marker to inform people about the site. Whatever ends up being the name, she said, “We are highly interested in maintaining the history of this creek.”

However, over 500 people who signed a Change.org petition say it is time the creek had a different name. The petition, which was started a year ago, describes the name as “racist” and “offensive.”

“Words matter. We can do so much better,” wrote one signer.

Others wrote that the name “Freedom Creek” would be more apt, and an inspiration because it celebrates those who sought freedom through the Underground Railroad.

The petition had been around for about a year, but didn’t have many signatures until Overland Park-based The Miller Dream began sharing it a few weeks ago.

Patrick Wotruba, founder of The Miller Dream, said the name is automatically offensive “because it was used so derogatorily towards our people. We don’t want a creek called that.”

The petition attributes the creek’s name to the possibility that it was used as part of a route by slaves seeking freedom before the Civil War. But Mary McMurray, director of the Johnson County Museum, said that’s far from an established fact.

Questions about name’s origin and context

McMurray and fellow historians have been struggling to find first-hand accounts, but the reason for the name has so far remained elusive. The creek could have been an informal route for freedom seekers, who would have used creeks rather than the open road in their journeys, she said. But she has so far not been able to find anything definitive.

There are other possibilities as well. “Negro” is the Spanish word for “black,” and there were Spanish and Mexican traders in this area, she said. Another theory is that the creek could have been named for racial violence that happened there, but McMurray said she has so far not uncovered any evidence of that either.

“I realize this leaves us with more questions than answers,” she wrote in her report to the group now considering a name change.

It will be an important discussion to have, said Cox of the state African-American Affairs Commission. Research is still in progress, but state officials believe there are five other Negro Creeks in Kansas running through six counties. Compared to some of them, the Johnson County creek has much less background information on the name.

“It’s not a very cut-and-dried issue to say the least,” she said. “A lot of thought and sensitivity has got to be used, but we have got to have the conversation.”

Cox said she’s dedicated to getting the full context and history of the name. “You can’t run away from the past,” she said, “but we have to really look at where we’re going for the future and what we know about who we are.”

Other facts about the creek’s history have also been hard to pin down, because it’s only on a few maps. Historians could not find the name on the Atlas Maps of Johnson County, but it does appear on historical maps from 1886 and 1856, a couple of government maps from 1956 and 1973 and then on storm water maps from 2018 and 2019.

In any case, a lot more research will have to be done before submitting a petition to the U.S. Geological Survey, which decides place names. Getting a name change involves months of work seeking public comments and buy-in from local government and citizen groups. The renaming board only meets quarterly and is not due for another meeting until late December, Fast said.

It’s possible that the group could come up with a proposal by then, but Fast said there are other Negro Creeks in Kansas and the state could also take the lead in renaming them all. In any case, researchers will continue to search for answers.

“We really want to get people’s stories about the history of it,” Fast said.