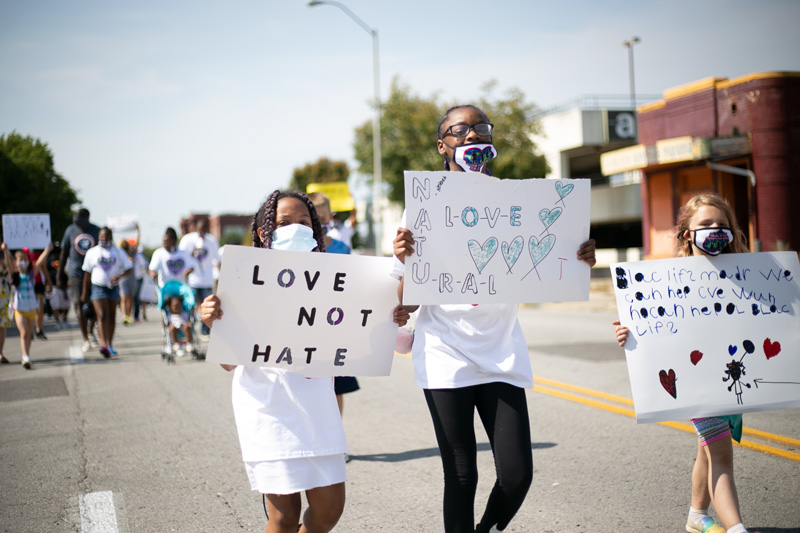 After she was attacked by a boy in Shawnee, Nevaeh Thomas (center) of Kansas City, Kansas, led a children's rally against hate and racism last weekend. Evidence from her offender's case is now part of open records after the district judge ordered it to go public.

A key piece of evidence from the Shawnee juvenile case involving the attack on a girl from Kansas City, Kansas has become part of the public record.

Judge Thomas Foster of Johnson County District Court filed a court order Wednesday afternoon ordering a probable cause affidavit from the Shawnee Police Department to be released. The case involves a 12-year-old boy who allegedly attacked Nevaeh Thomas, an 11-year-old girl from Kansas City, KS., when she was visiting a friend Aug. 28 at an apartment complex near Nieman Elementary in Shawnee.

The attack left Thomas unconscious for a few minutes and caused a concussion and a broken tooth, according to her family. She also required multiple stitches on her cheek. A spokesperson with the Johnson County District Attorney’s Office has confirmed to the Post that the boy faces a charge of aggravated battery, a felony.

In a brief phone interview with the Shawnee Mission Post, Judge Foster said he wanted to ensure the privacy of the children involved in the case, but he also believed the information provided in the affidavit was in the public interest.

What the affidavit says

The information in the affidavit contains testimony that Thomas and her friends, as well as her alleged attacker, gave to the police. The names of all children and adults in the affidavit are blocked out, although initials of the individuals are still visible.

Both the girls and the boy reported yelling at each other.

The boy said that he and Thomas had “a history of altercations.” And on Aug. 28, he reported that he and Thomas began yelling at each other, she hit him on the back of the head with a closed fist and he retreated to his friend’s apartment. He said she and her friends then threw sticks and rocks at the apartment’s door, trying to get inside. He said he tried to apologize, then he hit Thomas with a wooden pole.

Multiple witnesses, including Thomas and her friends, reported that the boy yelled racial slurs at Thomas, so she pursued him to the apartment of the boy’s friend. They reported that the boy brandished a large kitchen knife at them, then left and returned with a wooden closet rod, which he used to strike her in the face.

At a September 4 press conference, Thomas, members of her family and a family attorney  reported the boy hit Nevaeh with a steel pole.

LaRonna Lassiter Saunders, Thomas’ attorney, disputed some of the information in the affidavit provided by the boy and a Shawnee Police investigator.

“It is not surprising that the aggressor would play the victim,” Saunders said. “While, according to witnesses, the juvenile does have a history of attacking children at that complex. He has never had an altercation with little Nevaeh. This was her first time meeting him.”

Saunders continued,”We do find it telling that the juvenile just glossed over and failed to mention calling the girls racial slurs or having a knife.”

At an anti-racist rally for children led by Thomas and her family last month, some of her family members reported that Thomas continues to have dizzy moments, disorientation and nightmares from the attack.

In this case, the boy was sent home after completing a juvenile assessment.

Due to the health risks of the COVID-19 pandemic, court hearings take place over video communications. Affidavits provide written testimony from officers, and this information can be used as part of the court proceedings.

The boy is set to have another appearance in court sometime next week.