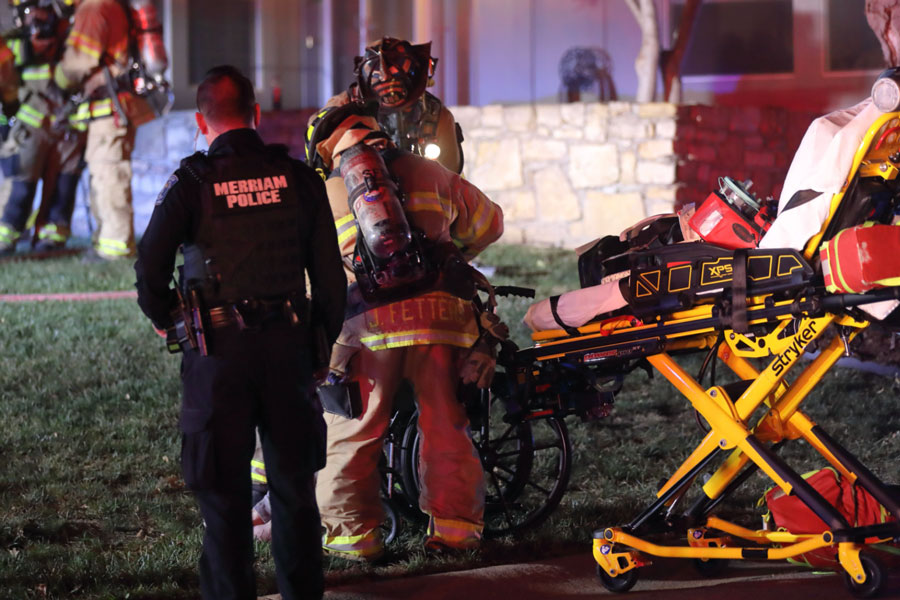 Shawnee and Overland Park firefighter help a man rescued from a Merriam townhome fire Tuesday night get back into his wheelchair. Photo credit Mike Frizzell.

Firefighters rescued a man with mobility issues from a townhouse fire late Tuesday evening in Merriam.

Overland Park and Shawnee firefighters were called to the 10200 block of Edelweiss Circle just after 9 p.m. on a reported building fire.

“One resident was out safely, but another was reportedly still inside,” Rhodes said. “Crews found an adult male on the floor, just inside the front door.”

Johnson County Med-Act evaluated the man at the scene. He was not injured.

Fire contained to one unit

After rescuing the man, firefighters were able to quickly knock down the fire, keeping it from spreading to any of the other units in the building.

The Red Cross was called in to assist the two adults and their dog who were displaced by the fire. All other residents of the building were able to return to their homes.

The townhome did not have working smoke alarms, according to the fire department.

“Overland Park Fire wants to remind everyone that working smoke alarms are the cheapest form of life insurance you can buy,” Rhodes said in the release.

Fire investigators continue to investigate the cause of the fire, and a damage estimate was not immediately available.