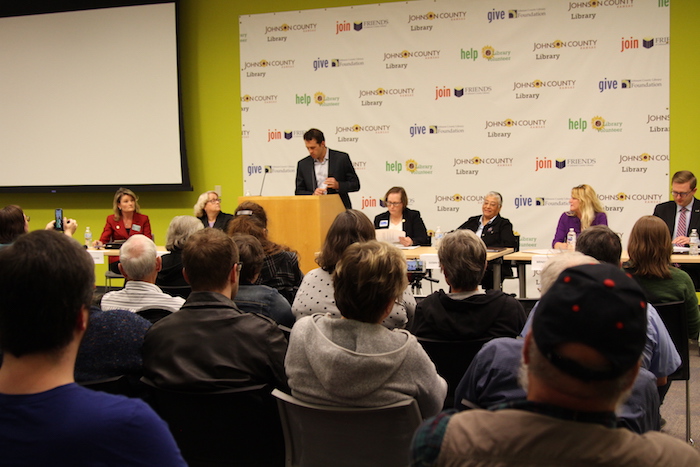 At the Shawnee Mission Post, we don’t try to hide who we are or why we’re here.

Check out our ‘Our Values’ page. We make it clear: transparency, public accountability, an informed and vibrant community.

For 10 years, we have strived to uphold those values. We aim to offer our readers balanced and nonpartisan coverage of the goings-on in their communities in northern Johnson County. In exchange, we ask for their support. But more than that, we seek their trust.

It’s why we report on local and state-level political races but don’t make endorsements. It’s why we send our reporters to city council and school board meetings but don’t pen op-ed columns in support or opposition to the policies enacted at those meetings.

We see ourselves as an information source, a conduit for citizens to be able to better understand their world and the powers that govern it and make their own decisions based on that information.

We believe wholly in the maxim attributed to Thomas Jefferson: “An educated citizenry is a vital requisite for our survival as a free people.”

That’s why it was so disheartening in recent days to get a rolling series of notifications from different political candidates that said they would not be attending public forums hosted this general election cycle by the Post.

The candidates so far who have not participated or say they won’t participate are all Republicans. All but one of them are vying for Kansas statehouse seats:

Dirks, Thompson and Warren all said, in part, they wanted to prioritize meeting with and talking to voters in person for the remainder of their campaigns.

Sapp, when asked by the Post, said she had “another engagement” the night of her scheduled forum.

Donohoe emailed the Post the morning of his forum, Thursday, Oct. 1. Apologizing for the late notice, he said that “due to unforeseen circumstances” he would be unable to attend.

After several attempts to reach Young by phone, his campaign manager emailed us saying he would not be attending the scheduled forum for House District 16 and wrote: “We would like to make it clear that Rashard never committed to participating in this forum; therefore, it would be highly dishonest to report that Rashard pulled out of it.”

After saying she wouldn’t participate, Williams never responded to the Post’s request for a reason why,.

Shull did not respond to the Post’s multiple communications regarding the scheduled forum for his race.

Hodge also never replied to our repeated requests to participate in a forum, and as far as the Post can tell, he does not have a current campaign website.

(For transparency’s sake, a non-Republican candidate has also told the Post they may have to miss an upcoming forum because of an unanticipated conflict with their full-time job. But we are not identifying that candidate because the final decision on their attendance has not yet been made.)

Candidate forums have been a part of the Post’s DNA almost since our beginning. These events are aimed at creating dialogue between citizens and the candidates who seek to represent them in local and state offices.

These forums are not structured as debates. We eschew “gotcha” questions, or questions that may put personality over public service. Instead, we are mindful about trying to create genuine conversation between candidates and their would-be constituents. We ask our readers for their priorities and then construct questions and topics based on those ideas.

The candidates know well in advance what topics (though not what exact questions) could potentially come up. They are given equal time to respond. It’s a format that is intended to be deliberate and measured, not bombastic and divisive.

Obviously, not having all sides at these events is less than ideal.

Johnson Countians miss out on hearing the competing ideas and positions of the people who wish to hold power in their communities. It dilutes the quality of public discourse and neuters the free exchange of ideas.

It’s been suggested to the Post by some readers that it would be unfair to now continue on with these forums. Putting the remaining candidates on the spot, this argument goes, would create an opportunity for their opponents (who didn’t appear) to run attack ads based on what is said at the forums.

While we empathize with these commenters’ frustration, we couldn’t disagree more. Candidates — of any political stripe — must have the courage of their convictions and the confidence in their ideas to be able to hold them up to public scrutiny and critique.

Canceling the forums outright, we feel, would hurt public discourse even further. It would also be a surrender to cynicism.

We have to fall back on our stated values: transparency, accountability, community.

We commit to still holding these forums and still keeping the rostrum open to any candidate who wants to join us.

We commit to measured public dialogue and the free exchange of ideas between the governed and those who would seek to govern.

We commit to continue to give our readers a chance to be active, informed citizens in northern Johnson County.

For years, the Post’s election forums have been a chance for our readers to learn about the candidates, their positions and their character. This year will be no different.

Our readers will learn something about the candidates, whether they show up or not.